All you need to know about the Awards in Predefined Areas (APA) 2019.

On 14 February 2020, the King-in-Council awarded ownership interests in the APA 2019 licencing round (Awards in Predefined Areas).

Of the 69 new production licences, 33 are in the North Sea, 23 in the Norwegian Sea and 13 in the Barents Sea.

See relevant files for downloading in the right hand margin.

14 January 2020, 28 companies have been offered ownership interests in a total of 69 production licences on the Norwegian Shelf in the Awards in Predefined Areas (APA) 2019.

Press release from the The Norwegian Ministry of Petroleum and Energy:

There was continued significant interest in exploration in mature areas in APA 2019 with applications from 33 companies. Read more:

Continued significant interest in exploration in mature areas in APA 2019

The Ministry of Petroleum and Energy announced APA 2019 on 29 May 2019, encompassing the predefined areas with blocks in the North Sea, Norwegian Sea and Barents Sea.

The deadline to apply for APA 2019 was Tuesday, 27 August 2019 at 12:00. Applicants are encouraged to submit in good time before the deadline. Awards are expected during the first quarter of 2020.

Relinquished area is included on a continuous basis in the predefined area on the NPD’s interactive Factmap, and maps covering the final area that can be applied for will be provided as soon as practically possible. See links below.

Extended map updates
The NPD’s interactive maps are closed for new updates from Thursday 13 June 2019, thus including as many relinquished licenses as possible in the acreage available for APA 2019.

Map of area available for application in predefined areas as at the announcement date: 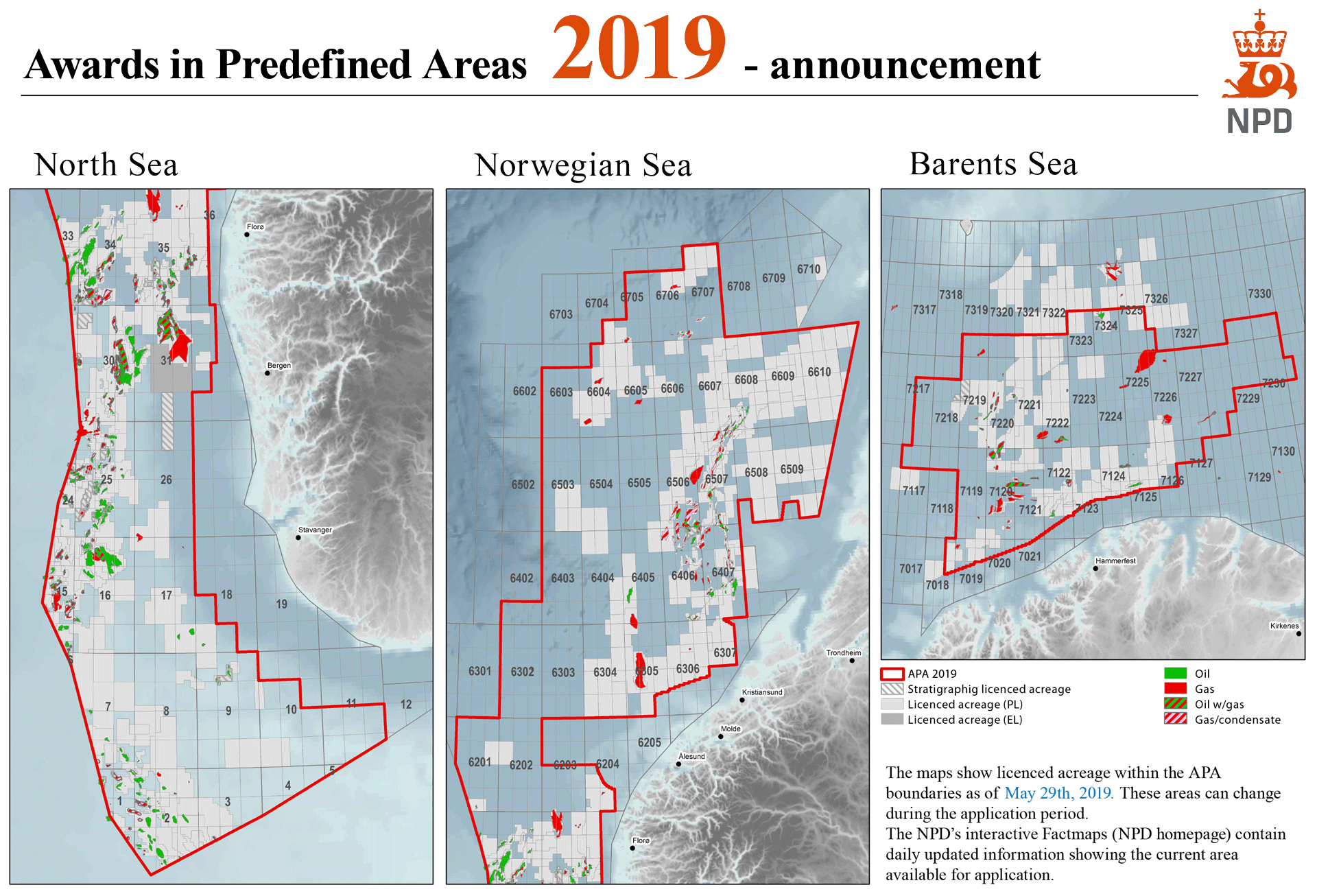 Each company that applies for production licences in APA 2019 must submit the following to the Norwegian Petroleum Directorate and the Ministry of Petroleum and Energy:

The submission to the Norwegian Petroleum Directorate (NPD) is via L2S Authority Communication.

The submission to the Ministry of Petroleum and Energy (MPE) shall be sent in any electronic format. L2S Authority Communication is one possible solution for submission this year.

See Guide to Application Letter from Company APA 2019 for more information about what the application letter must contain and Guide to Company Information APA 2019.

An application fee of NOK 123,000 must be paid for each application to APA 2019, including applications for additional acreage. When several companies join in a group application to apply for a production licence, this counts as one application. One of the members of the group pays the fee.

Payment shall be made to the Norwegian Petroleum Directorate, account no.: 7694.05.00326, marked "APA2019 (block number)". A copy of the receipt must be enclosed with the application letter from the company.

Each application for a production licence in APA 2019 must be submitted in electronic format. See Guide to Application for Production Licence APA 2019.

Forms that must be completed

Shape files that must be included

Contacts in the NPD