The most common method for removing facilities from the Norwegian shelf is to dismantle them and transport them to land. New technology is being developed to make the work more cost-effective.

The ordinary method for removing facilities is to dismantle them on the field and transport the pieces to the receiving facilities on land. This is done using either the "piece  by piece" method, where equipment is disassembled and cut into small pieces that are loaded into containers, or using heavy lifting. During heavy lifting, entire modules are dismantled in reverse order from how they were assembled, and then lifted onto barges or crane vessels and transported to land.

(The article continues below the picture.) 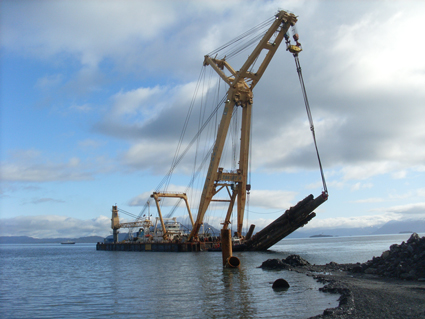 Facilities that are not going to be reused or abandoned on the field must be transported to land to an approved waste or processing facility.

Technology is being developed

Due to the high costs associated with the use of heavy lifting vessels, several measures have been implemented to develop new technology for removal of steel facilities resting on the seabed. Various concepts have been developed, but none of these have been tested on a large scale under Norwegian conditions. One of the methods that can increase the efficiency of the removal work is the "single lift" method, where entire platform superstructures or steel jackets can be transported to land in one piece. A heavy lifting record was set on the Norwegian shelf in 2016 when the 13,500-tonne production unit on the Yme field was lifted by the special vessel Pioneering Spirit and transported to Lutelandet for disassembly.

An alternative method for removal of steel jackets is attaching flotation tanks to the foundations. Each tank has a maximum net buoyancy of 60 tonnes, and consists of a glass fibre shell with internal walls made of flexible canvas between water or air-filled compartments. This method was used when the 12,000-tonne steel jacket for the DP2 drilling platform on the Frigg field was removed.

One of the biggest challenges so far during removal of facilities resting on the seabed has been detaching them from the seabed. It can be difficult to access the piles fastened to the seabed, and in some cases they have been filled with gravel, sand or concrete. Sometimes it has not been possible to cut the piles using conventional methods. It has therefore been necessary to develop new techniques, such as the use of water jets, diamond wire and explosives.