The Frigg field is the largest field on the Norwegian shelf to date where disposal of the facilities has been completed. Nearly five years after dismantling started in 2005, all topsides, steel jackets and equipment were removed from the field.

What is left is two concrete jackets in the UK sector, and one in the Norwegian sector.

It took nearly five years to prepare the cessation plan and get it approved. Pursuant to the Oslo-Paris Convention (OSPAR), it was clear that the three steel jackets and all topsides had to be removed, but how the concrete jackets were to be handled was uncertain. The alternatives that were assessed were either complete removal, dumping in deep water, cutting the concrete jackets down to 55 meters below the sea surface so that sea traffic is not obstructed, or abandoning the facilities on site. Comprehensive studies were needed, and they were carried out in cooperation with the companies that designed the platforms. The ultimate recommendation was to remove the platform deck and steel equipment, and leave the concrete jacket in place.

Nearly 90,000 tonnes of steel were brought to shore for scrapping – some to the Greenhead base on Shetland, but most to Kværner’s facility on Stord in Hordaland County. Separate environmental accounts were drawn up for the removal project, to ensure documentation of the flow of all materials from the platforms – including hazardous waste such as asbestos – up to final disposal with the end recipient. About 98 per cent of the material brought to shore has been recycled or reused.

The work to remove the Frigg facilities brought new knowledge and new technology. In order to be able to lift the 8000-tonne TCP2 deck, equipment had to be made to measure the exact weight and centre of gravity. The 9300-tonne steel jacket plus module support frame on DP2 were lifted without using heavy-lift cranes and divers, but by fastening four buoyancy tanks to the steel jacket.

Material parts from the steel platforms were sent to a laboratory to examine corrosion and fatigue, to benefit future development projects.

The lesson learned from Frigg disposal is that consideration must be given to the removal issue as early as in the development phase. 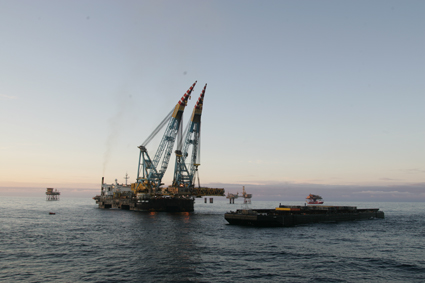 More than ten years have passed since work started to phase out
the installations on the Frigg field in the North Sea.