Many facilities on the Norwegian shelf are approaching the end of their planned lifetime. The NPD expects a considerable increase in demand for expertice and technology for decommissioning these facilities in a responsible manner.

Over the next decade, 20-30 of the currently producing fields are expected to cease production and decommission their facilities.

This significant increase in decommissioning activities in the years ahead will require a lot of attention from licensees, authorities and the supplier industry.

Disposals must be processed by the authorities

Shutdown and disposal of facilities is regulated in Chapter 5 of the Petroleum Act and Chapter 6 of the Petroleum Regulations. Five years at the earliest and two years at the latest, before a facility is shut down, the licensee must present a cessation plan to the Ministry of Petroleum and Energy (MPE). The plan – which must present the costs and environmental consequences of various disposal measures – must also be sent to the Ministry of Labour and Social Affairs and the Petroleum Safety Authority Norway. The NPD will assist the MPE in processing the plans, before the Ministry makes a disposal decision.

Key principles for processing a cessation plan include that all financially profitable and recoverable oil and gas resources must have been produced, the cessation project must be cost-effective and it must be possible to implement the project without adverse impact on health, safety, the environment and other users of the sea.

Norway acts in accordance with international regulations and agreements, such as the Oslo-Paris Convention (OSPAR). It governs international cooperation on protection of the marine environment of the North-East Atlantic, and forbids dumping and abandoning facilities in the marine area – with certain exceptions. Concrete substructures, concrete anchor base and footings of steel installations weighing more than 10,000 tonnes and placed in the maritime area before 9 February 1999, can be left in place. However, before permission is granted for this, a consultation process must be implemented within OSPAR. So far, permission has been granted for leaving the concrete part of the Ekofisk storage tank, including the concrete barrier surrounding it and TCP2’s concrete substructure on Frigg, on the seabed after the superstructure and other equipment have been removed.

Pipelines are covered by the Petroleum Act, but not the OSPAR Convention. The choice of disposal method is determined in each individual case based on an assessment of costs, weighed against the consequences for safety, the environment, fisheries and other users of the sea.

As a general rule, pipelines and cables can be abandoned, as long as they are not a hindrance or pose a safety risk for bottom fishing.

Nordøst Frigg was the first facility in the Norwegian sector to be decommissioned in 1993. Even though the steel jacket and concrete foundation has been converted into a jetty, and the platform deck and control tower are used for training shelf personnel on land, there is generally little reuse of facilities in Norway.

Facilities that are not re-used or abandoned on the field must be transported to land and handled at an approved facility for scrapping and recycling or disposal. Most of the waste from the petroleum activities (98 per cent) is recyclable steel. However, there will also be waste that requires special handling.

Since the scrapping facilities in Norway are located on deep fjords and have deep-water quays, other countries on the North Sea are likely to consider utilising these facilities in the future.

The future cost scenarios for cessation and disposal are uncertain and will vary from field to field. They depend on factors such as general cost development in the industry, the time when the decommissioning projects start, access to heavy lifting vessels and the capacity of the facilities receiving and processing disused facilities.

Through tax deductions, the State indirectly covers 78 per cent of the costs associated with termination and disposal of facilities. For fields in which the State has direct ownership interests, the State covers an even higher share of the costs. Therefore, cost control is an important issue for the authorities. 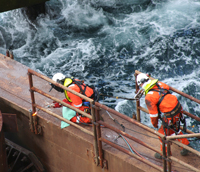