Depending on their specific geological properties, several types of geological formations can be used to store CO2. In the North Sea Basin, the greatest potential capacity for CO2 storage will be in deep saline-water saturated formations or in depleted oil and gas fields.

CO2 will be injected and stored as a supercritical fluid. It then migrates through the interconnected pore spaces in the rock, just like other fluids (water, oil, gas).

To be suitable for CO2 storage, saline formations need to have sufficient porosity and permeability to allow large volumes of CO2 to be injected in a supercritical state at the rate it is supplied at. It must further be overlain by an impermeable cap rock, acting as a seal, to prevent CO2 migration into other formations or to sea.

CO2 is held in-place in a storage reservoir through one or more of five basic trapping mech-anisms: strati graphic, structural, residual, solu-bility, and mineral trapping. Generally, the initial dominant trapping mechanisms are stratigraphic trapping or structural trapping, or a combination of the two.

In residual trapping, the CO2 is trapped in the tiny pores in rocks by the capillary pressure of water. Once injection stops, water from the surrounding rocks begins to move back into the pore spaces that contain CO2. As this happens, the CO2 becomes im-mobilized by the pressure of the added water. Much of the injected CO2 will eventually dissolve in the saline water, or in the oil that remains in the rock. This process, which further traps the CO2, is solu-bility (or dissolution) trapping. Solubility trapping forms a denser fluid which may sink to the bottom of the storage formation.

Depending on the rock formation, the dissolved CO2 may react chemically with the surrounding rocks to form stable minerals. Known as mineral trapping, this provides the most secure form of storage for the CO2, but it is a slow process and may take thousands of years.

Porosity is a measure of the space in the rock that can be used to store fluids. Permeability is a measure of the rock’s ability to allow fluid flow. Permeability is strongly affected by the shape, size and connectivity of the pore spaces in the rock. By contrast, the seals covering the storage formation typically have low porosity and permeability so that they will trap the CO2. Another important property of the storage site is injectivity, the rate at which the CO2 can be injected into a storage reservoir.

Oil and gas reservoirs are a subset of saline formations, and therefore they generally have similar properties. That is, they are permeable rock formations acting as a reservoir with an impermeable cap rock acting as a seal.

The reservoir is the part of the saline formation that is generally contained within a structural or stratigraphic closure (e.g. an anticline or dome). Therefore it is also able to physically trap and store a concentrated amount of oil and/or gas.

There is great confidence in the seal integrity of oil and gas reservoirs with respect to CO2 storage, as they have held oil and gas for long time periods. However, a drawback of such reservoirs compared with deep saline aquifers is that they are penetrated by many wells. Care must be taken to ensure that exploration and production operations have not damaged the reservoir or seal.

An aquifer is a body of porous and permeable sedimentary rocks where the water in the pore space is in communication throughout. Aquifers may consist of several sedimentary formations and cover large areas. They may be somewhat segmented by faults and by low permeable layers acting as baffles to fluid flow. Maps, profiles and pore pressure data have been utilized in order to define the main aquifers. All the identified aquifers in the area of this atlas are saline, most of them have salinities in the order of sea water or higher. 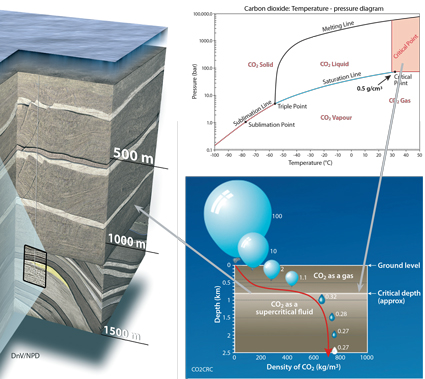 Fig.3.01
Supercritical fluids behave like gases, in that they can diffuse readily through the pore spaces of solids. But, like liquids, they take up much less space than gases. Supercritical conditions for CO2 occur at 31.1°C and 7.38 megapascals (MPa), which occur approximately 800 meters below surface level. This is where the CO2 has both gas and liquid properties and is 500 to 600 times denser (up to a density of about 700 kg/m3) than at surface conditions, while remaining more buoyant than formation brine. 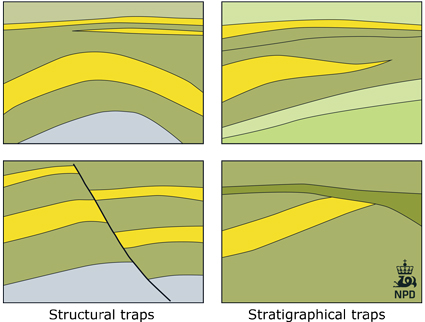 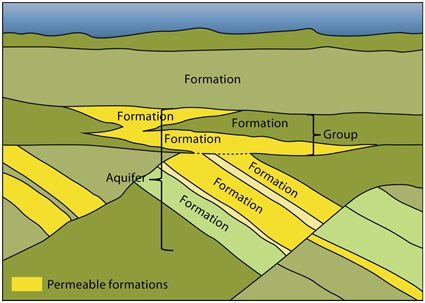