5.1 Geology of the Norwegian Sea

Structural elements in the Norwegian Sea.

Fig-5-003 and Fig-5-004
Well section panels showing gamma and neutron/density logs reflecting thickness variations of the different formations. The Åre and Tilje Fms show more or less constant thickness throughout the area. The Ile and Garn Fms are thinning and shaling out towards the north. The Garn Fm is quite thick in well 6510/2-1, but less sandy, and is thinning towards the west. 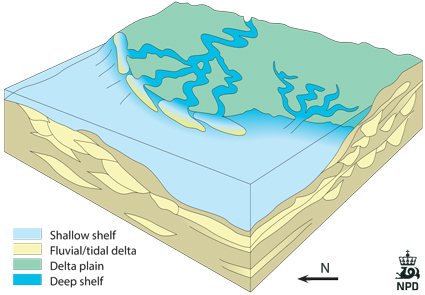 Fig-5-005a and Fig-5005b
Depositional environment of Tilje Formation. Conceptual sketch of an early stage in the development of the Tilje formation in parts of the Norwegian Sea.

The Norwegian Sea covers most of the continental margin between approximately 62o and 69o3o’ N. The tectonic history of the Norwegian Sea can be divided into three major episodes: A) Final closure of the Iapetus Ocean during the Caledonian Orogeny (Late Silurian/Early Devonian). B) A series of mainly extensional deformation episodes (Late Devonian to Paleocene), culminating with the continental separation between Greenland and Eurasia. C) Active seafloor spreading in the North Atlantic between Eurasia and Greenland (Earliest Eocene to present).

The area with the best potential for storage of CO2 is the Trøndelag Platform (63o to 67o N), one of the main structural elements of the Norwegian Sea. The Trøndelag Platform contains the following structural elements: the Nordland Ridge, the Helgeland Basin, the Vega High, the Ylvingen Fault Zone, the Froan Basin and the Frøya High. The areas further west and south are considered less suitable for storage of CO2 due to the active production of hydrocarbons, high temperature and high pressure and the depth of the relevant reservoirs.

Carboniferous, Permian and Triassic: Rifting and formation of N-S to NE-SW trending rotated fault blocks occurred on the Halten Terrace and parts of the Trøndelag Platform in late Permian/early Triassic times. This was followed by deposition of a thick continental Triassic succession. Drilling in the Helgeland Basin has proven up to 2500m thickness of Triassic (Grey and Red beds) including two Middle Triassic evaporite intervals up to 400m thick. The evaporite intervals represent detachment levels for later extensional faults. These thick sequences are related to pronounced subsidence and deposition in a fluvial sabkha environment. This tectonic event was possibly preceded by Carboniferous and Permian rifting.

Jurassic and Cretaceous: During the Early and Middle Jurassic, the Trøndelag Platform and the Halten/Dønna Terrace were parts of a large NS-trending subsiding basin which was infilled by a deltaic to fluvial depositional system. Sediment input from several directions through time has been interpreted. The Jurassic sediments become thinner towards the Nordland Ridge and the thickness increases over the Vega High and the Helgeland Basin. Starting in the middle Jurassic and culminating in the late Jurassic/early Cretaceous, the Norwegian Sea underwent a major tectonic phase with extension, faulting and thinning of the upper crust. The Halten and Dønna Terrace were downfaulted in relation to the Trøndelag Platform. Further to the west, the Vøring Basin subsided in relation to the terrace areas. During this extensional phase, both large-scale basement faults and listric faults were active, soling out into the Triassic salt. In the middle Jurassic, the Nordland Ridge and the Frøya High were uplifted, while the Helgeland Basin area subsided. Later, the Vega High was inverted, and faulting continued along the major faults well into the Cretaceous. The Froan Basin was a shallow sea during Late Jurassic, and it was later covered by thin, condensed Cretaceous sediments. In contrast, the Helgeland Basin area continued to subside. It has a thickness of up to 1500m of Cretaceous sediments. During the Late Cretaceous, there was a rapid subsidence west of the Nordland Ridge due to increased rifting in the west. At the same time, the structural highs and the Lofoten-Vesterålen area were uplifted.

Cenozoic: In the Paleocene, uplift of the Norwegian mainland resulted in progradation of clastic sediments from Scandinavia into the Norwegian Sea. Sandy deposits, sometimes with good reservoir properties, have been recorded north of the Nordland Ridge and in the Møre Basin (Egga sand). The progradation continued into the Eocene. The separation between Greenland and Eurasia and the onset of ocean floor spreading started in the Earliest Eocene. This is reflected in deposition of tuffs and tuffaceous sediments on a regional scale (the Tare Fm). On the Vøring and Møre Marginal Highs, lava flows and basaltic dike complexes were emplaced. The sediment input from Scandinavia was reduced in the Oligocene and Miocene. The deltaic Molo Formation has good reservoir sands, but is not sealed towards the sea floor. The Nordland Ridge was uplifted in the Late Cenozoic. In the Pliocene and Pleistocene, new uplift and glaciations caused erosion and deposition of thick sedimentary wedges onto the mid Norwegian shelf.