The Båt Group is dominated by sediments deposited in deltaic to shallow marine environments overlying the Triassic Grey and Red beds (informal). This group is subdivided into four formations, the Åre, Tilje, Ror and Tofte Formations. The type well (6507/12-1) is located in the transition zone between the Halten Terrace and the Trøndelag Platform. The lower boundary of the group is defined below the first appearance of coal above the Triassic Grey beds. The upper boundary is defined at the base of a coarsening upwards sequence of the Ile Fm in the Fangst Gp. Marine influence increases towards the top of the succession and also to the north and west.

The Båt group is present in most of the wells drilled on Haltenbanken and Trænabanken with a maximum thickness up to 1000m (707m in the type well) in the eastern part of the Halten Terrace. Due to erosion, the upper part of the succession is progressively truncated towards the crestal parts of the Nordland Ridge. Shallow boreholes off the Trøndelag and Nordland coast indicate that mid Jurassic sediments onlap the metamorphic basement.

The burial depth of the Båt Gp. varies from 1000-2500m on the Trøndelag Platform and marginal areas of the Helgeland Basin. West of the Nordland Ridge the burial depth increases to more than 4000m. Porosities and permeabilities in the order of 25-35% and 100 mD to several darcys have been reported. However, rocks on the eastern part of the Trøndelag Platform have probably been buried deeper than the present depths indicate, due to Neogene erosion. 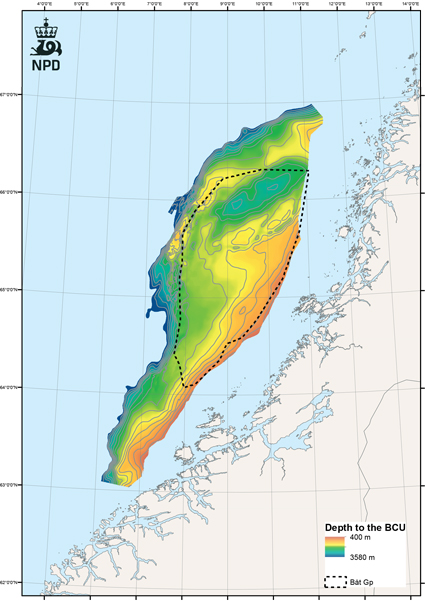