The Cromer Knoll and Shetland Groups

The Cretaceous sediments in the Norwegian Sea are dominated by mudstones and siltstones, which form good seals. In the Halten and Dønna Terrace, certain intervals including the Lower Cretaceous Lange Formation and the Turonian-Coniacian Lysing Formation, contain locally developed sandstone units. In the northern part of the Vøring Basin, north of 67°N, the Nise Formation contains a thick succession of sandstones deposited as mass flows in a deep marine environment. The Santonian - Campanian sandstones of the Nise Formation were sourced from Greenland and shale out towards the south and east. Some methane gas discoveries have been made in the Nise Fm sandstones. Although these sandstones have quite good reservoir properties and a large volume, their CO2 storage potential was not evaluated, due to their remote location, and because they are located within a petroleum province. The Lange Fm, dominantly consisting of claystones, contains several local sandstone bodies which could act as thief sands. They are buried too deeply and have too small volumes to have any CO2 storage potential.

Maastrichtian sandstones within the Springar Formation occur locally in the deep water areas. Their small volumes and poor reservoir properties make them unattractive for CO2 storage.

The Lysing Fm forms the upper part of the Cromer Knoll Group, which consists of the Lyr, Lange and Lysing Formations. In the type well (6507/7-1), on the Halten Terrace west of the Nordland Ridge, the thickness of the Lysing Fm is 74m. In the Dønna Terrace area, sand­stones within the Lysing Formation form a reservoir section with a thickness up to about 70 m. The Lysing Fm sandstones in the Dønna Terrace were probably deposited as submarine fans in a deep marine environment. Their source area is believed to be the Nordland Ridge and the highs further north. A few methane gas discoveries have been made in the Lysing Fm sands west of the Skarv Field.

Although the Lysing Fm sands have a significant aquifer volume, it was decided to exclude this formation from a further evaluation of its storage potential. The main reason is that the aquifer is overpressured in the main depositional area in the Dønna Terrace, leaving a small pressure window for CO2 injection before the fracture gradient is reached. Also, it is located in a zone of petroleum exploration and future production, where conflicts of interest with CO2 injection projects could occur. 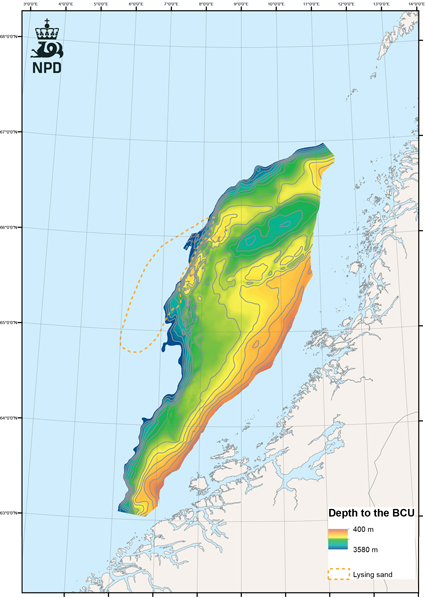 Fig-5-047
Outline of the Lysing Formation and Base Cretaceous depth map. 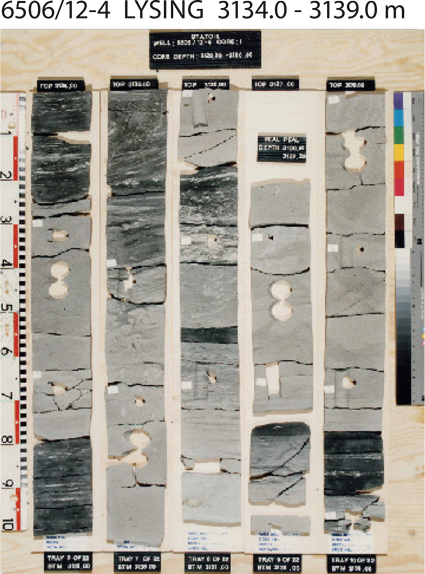