The Late Cretaceous deposits in the Norwegian Sea were dominated by fine-grained sediments, and the source areas for sands were located to the north and west. In the Paleocene, the transport of sediments from Greenland to the Vøring Basin continued, but there was also significant sediment supply from Scandinavia to the Trøndelag Platform and Møre Basin. The main reservoir sand from the Paleocene-Eocene period is the Danian Egga sandstone.

The Egga sandstone (Danian) This Danian sandstone forms the main reservoir of the giant Ormen Lange gas field. At present, there is no type well or reference well defined. The sandstone has so far no formal stratigraphic formation name, but it has been referred to informally as the Egga formation on the NPD website. At the Ormen Lange field it is defined as a deep marine mass flow sandstone unit within the Rogaland Gp. In the field, a maximum thickness of 80m was found in well 6305/7-1. The Egga sandstones are found in several exploration wells in the Møre Basin and Slørebotn Sub-basin. The reservoir quality and thickness vary considerably depending on where the well is positioned in the different submarine fan systems. The Ormen Lange fan is possibly the largest submarine fan within the Egga sandstone, and the map below shows a thickness map of this fan along with the approximate outline of the sand system.

The shallow eastern part of the Møre Basin has a monoclinal structure where all sedimentary beds dip from the coast into the basin. Any structural closures are likely to be small. Consequently, an injection site for large volumes of CO2 would probably need to have a stratigraphic component to the structure. Possibly the Egga sandstone aquifer could be used for injection of small volumes of CO2, which could be residually trapped before they migrate to the sea floor. Such a case has been modelled for a Jurassic aquifer in the Froan Basin in section 5.2. This case has not been evaluated for the Møre Basin. 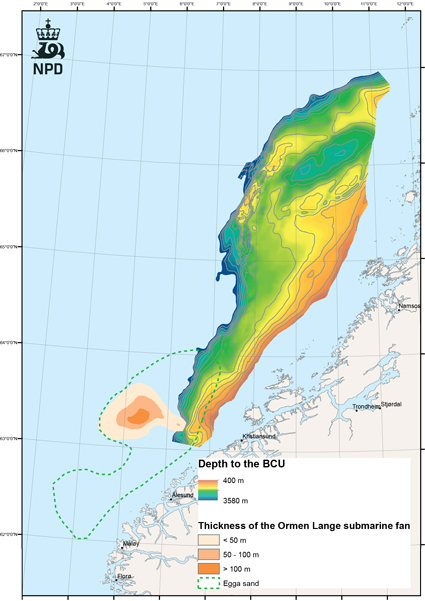 Fig-5-050
Base Cretaceous map and outline of the Egga formation.
Distribution and thickness of the Ormen Lange submarine fan. 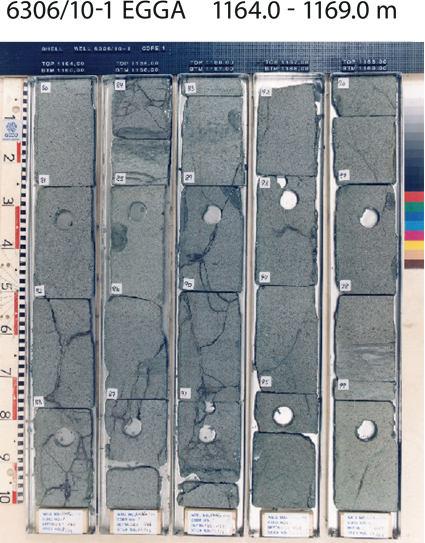