The results of the evaluation of aquifer storage capacity are summarized in the tables. The Trøndelag Platform including the Nordland Ridge is the area best suited for CO2 storage. A thick Jurassic section is present and has been divided in two aquifers. The burial depth is approximately 1500-2000 m, and the reservoir quality of the clean sandstones is excellent.

The lower Åre-Tilje aquifer is distributed over the whole area and the potential injection volume is calculated to about 4Gt. The reservoir is heterogeneous, dominated by fluvio-deltaic to tidal deposits, and the connectivity both on a local and regional scale is uncertain. The upper Ile and Garn aquifers are developed as good reservoirs in the southern part (Froan Basin). The Garn reservoir has the best permeability and connectivity of the Jurassic sandstones. All the aquifers are subcropping towards the sea floor along the coast. The thickness of the Quaternary cover is variable. CO2 injection projects should be planned to avoid long distance migration towards the subcrop and possible further seepage to the sea floor. Modelling of injection in the aquifer indicates that it is possible to inject at a rate and volume where the CO2 is trapped and/or dissolved before it reaches the subcrop area. The conclusion is that the Garn and Ile storage capacity is relatively low, about 0.4 Gt.

Five large structural closures have been identified. Two of them (structures D and E) are located outside the Trøndelag Platform and add storage capacity to the area. Structures D and E are covered by 3D seismic data and wells and are regarded as more mature than the other structures and evaluated aquifers.

The Møre Margin is geologically different from the Trøndelag Platform and does not seem to hold a large storage potential due to its proximity to deep basins and subcropping aquifers.

In the petroleum provinces, the storage potential was calculated from the extracted volume of hydrocarbons in depleted fields. Such storage will usually require a study of the integrity of the wells which have been drilled into the field. If oil has been present, it is relevant to study the potential for increased recovery by CO2 injection. Studies of EOR by CO2 injection were performed some years ago for the Draugen and Heidrun fields. 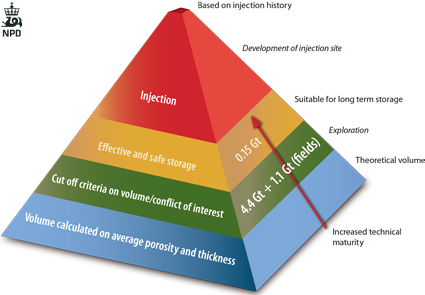