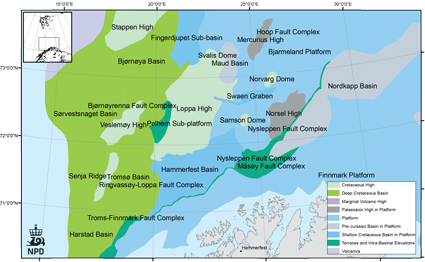 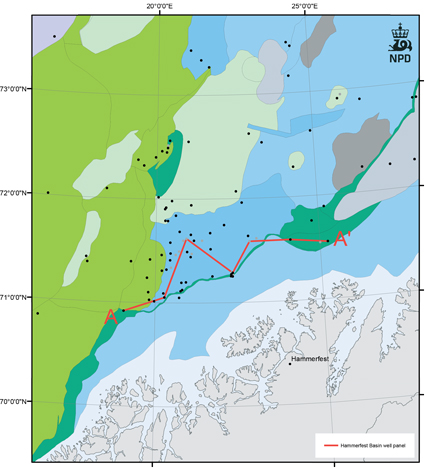 Fig-6-003
Transect from the Harstad Basin to the Måsøy Fault Complex (AA`). 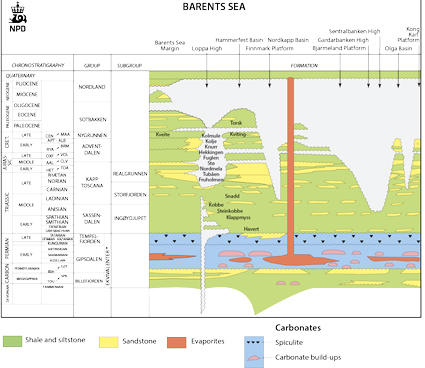 In NPD Bulletin No 4 (Dalland et.al. 1988) a lithostratigraphic scheme was defined for the Mesozoic and Cenozoic successions offshore mid- and northern Norway.

Dallmann et.al (1999) suggested a revised lithostratigraphic scheme for the Upper Paleozoic, Mesozoic and Cenozoic successions from the Svalbard area including the southern Barents Sea.

The official stratigraphic nomenclature for the Barents Sea is as follows:

The CO2 Storage Atlas for the Norwegian Continental Shelf has followed the definitions from Dallmann et.al (1999) and suggested a revised lithostratigraphic scheme for the Mesozoic. For the Upper Paleozoic successions, the official nomenclature from NPD Bulletin No 9 (Larssen et.al 2002) has been used. For the Cenozoic, we follow NPD Bulletin No 4. 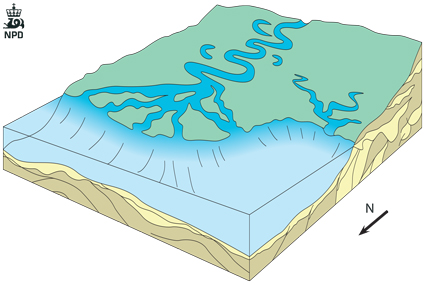 Fig-6-005
Conceptual sketch of an early stage in the development of the Stø formation in the southern parts of the Barents Sea.

The Barents Sea is located in an intracratonic setting between the Norwegian mainland and Svalbard. It has been affected by several tectonic episodes after the Caledonian orogeny ended in Late Silurian/Early Devonian.

There is a marked difference, both in time, trend and magnitude, between the tectonic and stratigraphic development in the western and eastern parts of the southern Barents Sea. This boundary is defined by the dominantly N-S to NNE-SSW trending Ringvassøy-Loppa and Bjørnøyrenna Fault Complexes. The area to the west of this boundary was tectonically very active throughout Late Mesozoic and Cenozoic times, with deposition of enormous thicknesses of Cretaceous, Paleogene and Neogene sediments in the Harstad, Tromsø and Bjørnøya Basins. NNE-SSW, NE-SW and locally N-S trending faults dominate in this western part. In contrast, the southeastern Barents Sea is dominated by thick Upper Paleozoic and Mesozoic sequences, where E-W, WNW-ESE to ENE-SSW fault trends dominate.

The area evaluated for CO2 storage is defined to the west by the N-S to NNE-SSW trending Ringvassøy-Loppa and Bjørnøyrenna Fault Complexes, to the south/southeast by the Troms-Finnmark Fault Complex and the Finnmark Platform, to the north by an east-west line approximately along the 73o N parallel, and to the east by a north-south line running approximately along the 28oE meridian.

The southern Barents Sea shelf is divided into several main structural elements. The most important ones are: The Hammerfest and Nordkapp Basins, the Finnmark and Bjarmeland Platforms and the Loppa High. There are also several smaller structural elements, like the Polheim Sub-platform, Senja Ridge, Veslemøy, Norsel High. Bordering and partly defining the main structural elements are a series of complex fault zones: Troms-Finnmark, Ringvassøy-Loppa, Bjørnøyrenna, Måsøy, Nysleppen and Asterias Fault Complexes.

Major subsidence occurred in the Triassic, Jurassic and Early Cretaceous, overlain by a thin, highly condensed sequence of Late Cretaceous and Early Paleocene shale. There is no evidence for diapirism of Upper Paleozoic evaporites as seen in the Tromsø Basin to the west and the Nordkapp Basin to the east. Internally the basin is characterized by a central E-W trending faulted dome-structure, related to the Late Jurassic tectonic episode.

During the Late Paleozoic (Late Carboniferous to Early Permian), thick sequences of halite were deposited (Gipsdalen Gp) giving rise to pronounced salt diapirism, beginning in the Early Triassic. The basin is dominated by thick Mesozoic, mainly Triassic successions, with a significant thickness of Upper Paleozoic rocks.

The Troms-Finnmark Platform is bounded by the Norwegian mainland to the south, to the west by the southwestern extension of the Ringvassøy-Loppa Fault Complex and by the Hammerfest and Nordkapp Basins to the north.

The central part of the Troms-Finnmark Platform in the Norwegian sector shows a rift topography with half-grabens containing siliciclastic rocks of Early Carboniferous age (Billefjorden Gp). During the Permian, the stable western part of the platform was transgressed. Late Permian and Late Jurassic movements followed by Cenozoic tectonism, and uplift resulted in a gentle northward tilt of the Finnmark Platform. In the northeastern part of the Platform, thick sequences of Mesozoic, mainly Triassic rocks have been drilled.

The Bjarmeland Platform is part of an extensive platform area east of the Loppa High and north of the Nordkapp Basin. The platform was established in the Late Carboniferous and Permian, but subsequent Paleogenetectonism tilted the Paleozoic and Mesozoic sequences towards the south, so that presently unconsolidated Pleistocene sediments overlie successively older rocks to the north. Towards the south and west, the platform is divided into minor highs and sub-basins mainly formed by salt tectonics (Samson Dome).

The Bjarmeland Platform is characterized by a thick Triassic succession of the Ingøydjupet Subgroup, with a maximum drilled thickness of 2862m on the Nordvarg Dome (well 7225/3-1). The thickness of the Realgrunnen Subgroup varies between 100 and 200m. 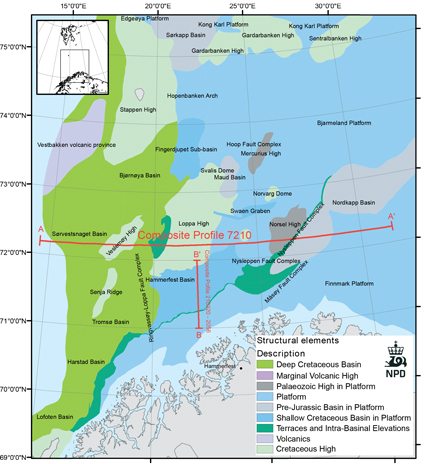 The Loppa High is a marked (N-S) trending structural feature, separated from the Hammerfest Basin in the south by the E-W trending Asterias Fault Complex. To the west it is separated from the Tromsø and Bjørnøya Basins by the Ringvassøy-Loppa and Bjørnøyrenna Fault Complexes. To the east it grades into the Bjarmeland Platform. The Loppa High has a complex geological history with several phases of uplift/subsidence followed by tilting and erosion. Late Carboniferous rift topography was filled and overlain by Upper Paleozoic siliciclastics, evaporites and carbonate. During the Late Permian to Early Triassic the Loppa Ridge was uplifted and tilted. This was followed by a gradual onlap during the Early and Middle Triassic, before deposition of a thick Upper Triassic succession (Snadd Fm). On the southern crest of the Loppa High, the eroded remnants of a sequence of Paleogene shale (Sotbakken Gp) is overlying Middle Triassic claystones.

An important geological factor for the Barents Sea region is the major Paleogene tectonism and uplift and the following Paleogene and Neogene erosion. Generally the net uplift, defined as the difference between maximum and present burial, is greatest in the northwestern part towards Bjørnøya/Stappen High (calculated to be up to 3000m), and is less towards the east and south. The Paleogene tectonism is suggested to be partly related to the plate tectonic movements in relation to the opening of the Atlantic and Arctic Oceans. An important part of the erosion took place in the Quaternary, when erosion rates increased due to the glacial conditions. 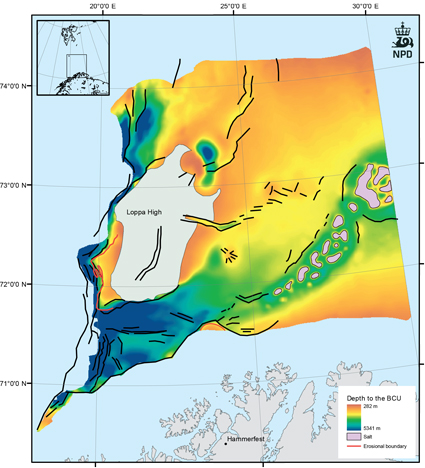 Fig-6-009
Depth to the Base Cretaceous Unconformity. To the west the surface is deeper than 3000m. The red line outlines areas where the Jurassic section is eroded. 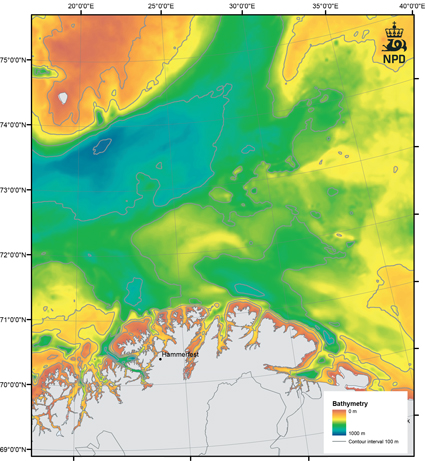 Fig-6-010
Bathymetri of the southwestern Barents Sea.
Based on Jakobsson et al. 2012. 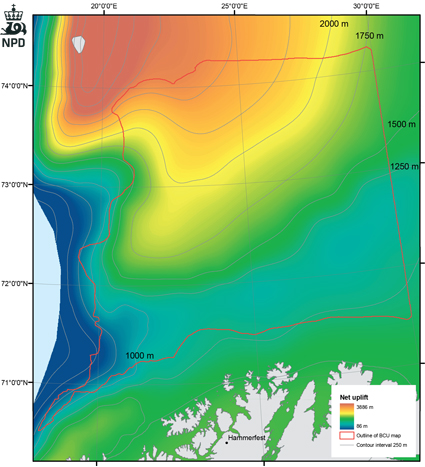 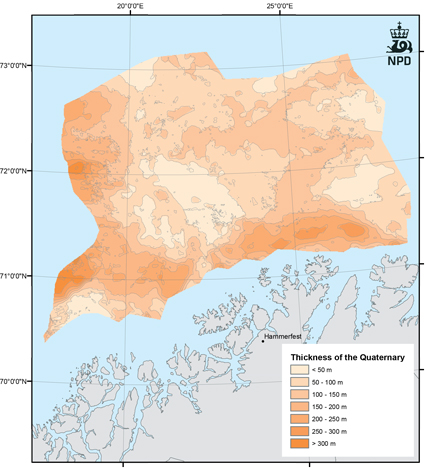 Fig-6-012
Thickness map of Quaternary in the Barents sea.
During the last 2.5 m years glaciers and cold climate dominated in the region, eroding the remnant highs offshore Finnmark and Northern Troms. 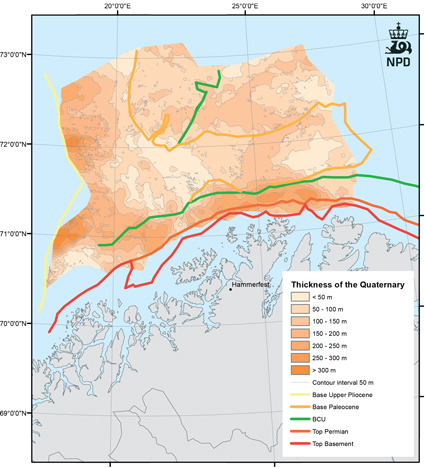 Fig-6-013
Thickness map of Quaternary sediments including subcrop lines of basement, top Permian, BCU, base Paleocene and base upper Pliocene.