An overview of the results of this study are displayed in the table and illustrated by maturation pyramids for the North Sea, Norwegian Sea and southern Barents Sea. All areas have a significant potential for CO2 storage, but the table shows that the regions are quite different.

The total storage capacity of the North Sea aquifers is much larger than for the other regions. One reason for this is that in the North Sea there are important aquifers at several stratigraphic levels, while in the Norwegian Sea and Barents Sea, Jurassic formations will be the main target for CO2 injection.

The injectivity of the studied aquifers and the sealing properties of their cap rocks are considered to be acceptable or good, mainly because poor quality reservoir formations were excluded from the evaluation. Some of these are mentioned in the sections of the geological description.

Sealing properties are typically characterized as slightly lower in the Barents Sea than in the other regions. This is discussed in the text and is due to the Cenozoic and Quaternary uplift history and widespread evidence of hydrocarbon seepage.

In the North Sea and Norwegian Sea the studied aquifers belong to areas where conflicts of interests with petroleum industry are not very likely. Most of them were characterized to the green level in the maturation pyramid. Due to a geological setting with source rocks at several stratigraphic levels and a complex burial history, most parts of the southern Barents Sea were considered to be of interest for future petroleum exploration, consequently the studied aquifers were classified to belong to the blue level.

A large data base of wells and seismic data has been available for the study. Most areas which have been recently explored by the petroleum industry are covered by 3D seismic data. In general the data coverage of the studied aquifers is more sparse, because they belong to provinces which are less attractive for the petroleum industry. Aquifers with few well penetrations and mainly 2D seismic coverage are characterized with an orange colour in the data quality column. Most likely more data would have to be acquired if such aquifers are selected for maturation of possible storage sites.

In summary, there is more than sufficient storage capacity in the Norwegian Sea and Barents Sea for CO2 captured from local sources, while the Norwegian North Sea will also have potential to store CO2 from northern Europe. 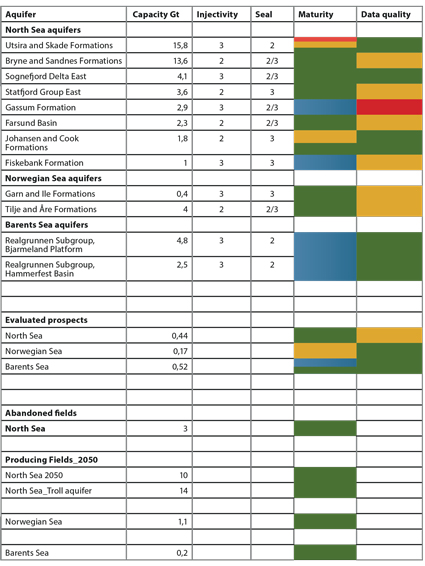