Trio at the top

They can agree on good strategies, and their output ambitions for Alvheim have more than doubled from an initial 175 million barrels. That is why the licensees for this North Sea field won the NPD’s improved oil recovery (IOR) prize for 2018. 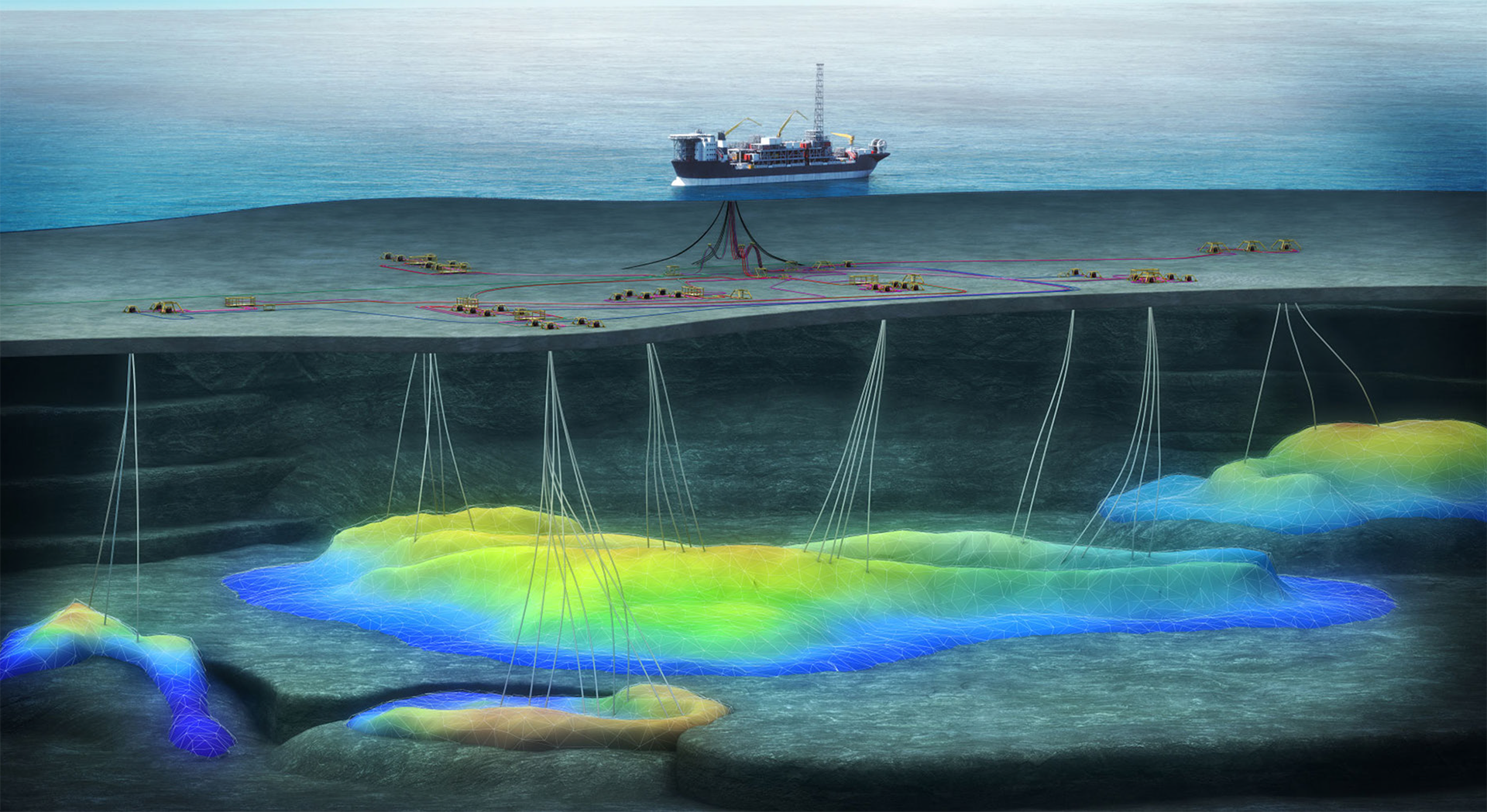 Aker BP, ConocoPhillips and Lundin are certainly committed to extracting as much as possible of the oil from the Alvheim reservoir.

That commitment extends right from a very active partnership at production licence level down to the specialist teams who are hands-on with equipment and magnifying glass in the sub-surface.

Work in the licence is characterised by good communication, sharing of data and a solid ability to reach agreement on the commercial deals.

A number of minor licence interests have been combined in a way which means that everyone feels they have got something back for what they contribute to the production collective. 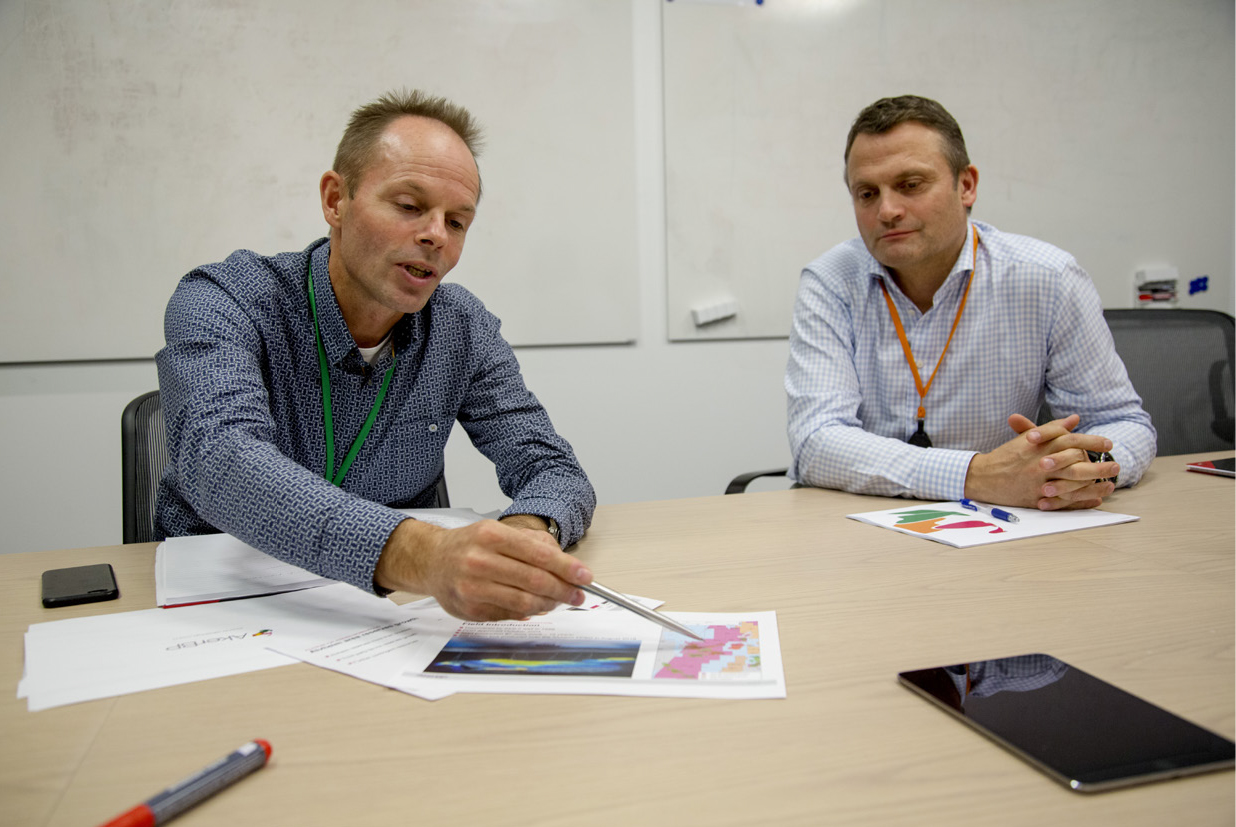 Sharing data.
Geir Westre Hjelmeland (right) is Aker BP’s vice president for Alvheim, while Constantijn Dejongh is vice president for reservoir management. They believe this field is a good example of the way all discoveries should be developed in the North Sea. Sharing data and experience is one of the IOR prize criteria.

The Alvheim area is a stellar example of the way developments should be pursued in the North Sea, according to Geir Westre Hjelmeland, vice president for Alvheim at Aker BP.

Step one is to discover enough petroleum to support an approved plan for development and operation (PDO). Once production begins, the infrastructure must also be used to locate additional reserves and maximise resource utilisation around the first find.

When Alvheim came on stream in 2008, it produced some 120 000 barrels per day. After almost 10 years in operation, it reached this figure again in 2017. More than half the oil output today comes from discoveries made since production began.

Aker BP is a partner in all the licences covering the area, including satellite fields now tied back to the Alvheim floating production, storage and offloading (FPSO) unit.

Alvheim partner Lundin Norway is also involved in most of the other discoveries, while ConocoPhillips’ participation is confined to the parent field.

Adopting new technology has been one of the success criteria for the Alvheim area, both in discovering more oil and in recovering a larger proportion of resources in place.

Constantijn Dejongh is Aker BP’s reservoir vice president for the Alvheim area. With a pen hammering on an illustration of the field, he points out that enhancing seismic methods to improve reservoir understanding is very important for IOR.

A third three-dimensional seismic survey was conducted in the Alvheim area last year, allowing the specialists to see where water has intruded and gas expanded in the reservoir.

“We can then see where the oil we still want to get out is located,” explains Dejongh. “That helps us to drill an extra well in the right place, for example.

“One of the producers we recently drilled is due to come on stream next week. It’s a multilateral with three branches. One is 3 500 metres long, and the overall length exceeds 10 kilometres.

“We’re actually vacuuming the reservoir clean of oil in this way. In total, we’ve drilled more than 100 kilometres of well paths through Alvheim.”

Another technique being deployed consists quite simply of drilling many pilot boreholes, which helps to reduce the risk for future wells.

“Where we have good reason to believe oil is present, we stick down a pilot,” Dejongh reports. “Taking just a few days, that’s an economic way of ensuring sufficient resources exist in the area.”

Such pressure support is needed

to drive more oil out of the formations, and long horizontal wells represent the best way of developing the field.

The specialists have benefited greatly from using inflow control devices (ICDs) and autonomous versions (AICDs) to choke gas and water from the wellstream before it reaches the FPSO.

“We’ve just drilled a well on the Gekko field which found an oil column only six-seven metres thick, with large quantities of water below and a lot of gas above,” says Dejongh.

“Such formations are challenging to produce, but these are the kind of targets we set ourselves – and we must then adopt the tools and technologies needed to meet them.”

Tracer systems are also installed on the seabed well completions, and make use of chemicals which react with oil, gas or water.

When sampling on the FPSO, the specialists can detect what a well is actually producing – which is important for finding out whether the whole well is contributing, adjusting recovery and possibly identifying areas for new drilling.

Recoverable reserves in Alvheim were put at roughly 175 million barrels of oil equivalent (boe) by the plan for development and production (PDO) presented in 2004.

The amount actually produced from this field is now more than twice that figure, while volumes in the nearby Vilje and Volund discoveries have almost doubled from the original estimates.

“To recover the proven oil reserves, we must have good uptime on the FPSO and fantastic understanding

of the sub-surface in order to position the wells correctly,” explains Dejongh.

“We also need the best possible projects with costs as low as possible. At the same time, we require exploration success. So a number of things have to work out.”

The nearby Frosk discovery was proven in February 2018. Before appraisal wells were drilled, it was estimated to contain 30-60 million boe.

Plans call for the Forsklår and Rumpetroll exploration wells to be drilled in this area from early next year, followed by a producer on Frosk. This will begin test production less than 18 months after the discovery was made.

Hjelmeland reports that all the oil from new discoveries has so far been tied back to the FPSO, and says it is too early to determine whether the basis exists for more installations.

“If the Frosk wells indicate that more is present there than we currently think, it’ll influence our choice of concept. We’re optimistic.”

Success on satellites Frosk, Trell and Trine as well as further discoveries in the actual Alvheim licence are important for continued development of the area.

One interesting possibility exists which has still not been investigated, Dejongh reports. “Hydrocarbons could well exist further down in this area - what we call the ‘cellar’.”

The deeper sub-surface comprises Jurassic sandstones of unknown permeability and porosity. They could contain oil – or gas. Assessing this from the seismic data can be difficult.

“We can’t abandon the Alvheim area in 2045 without having probed these deep strata,” says Dejongh. 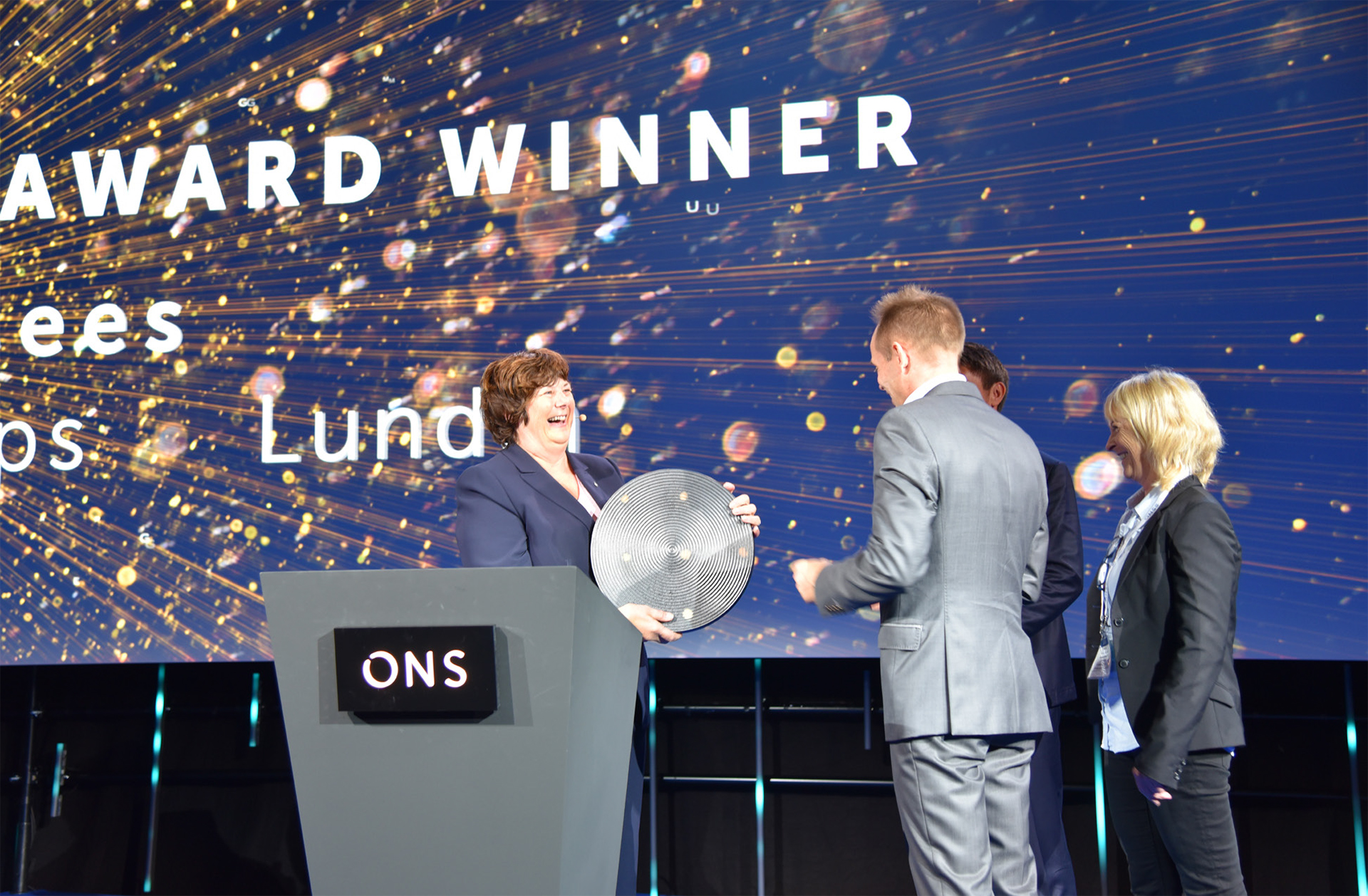 The NPD’s 15th IOR Prize was presented by director general Bente Nyland (left) during a ceremony at the ONS oil show in Stavanger this August. Representative from Aker BP (operator with 65 per cent), ConocoPhillips (20 per cent) and Lundin (15 per cent) were called up to receive the prestigious award.
(Photo: Arne Bjørøen) 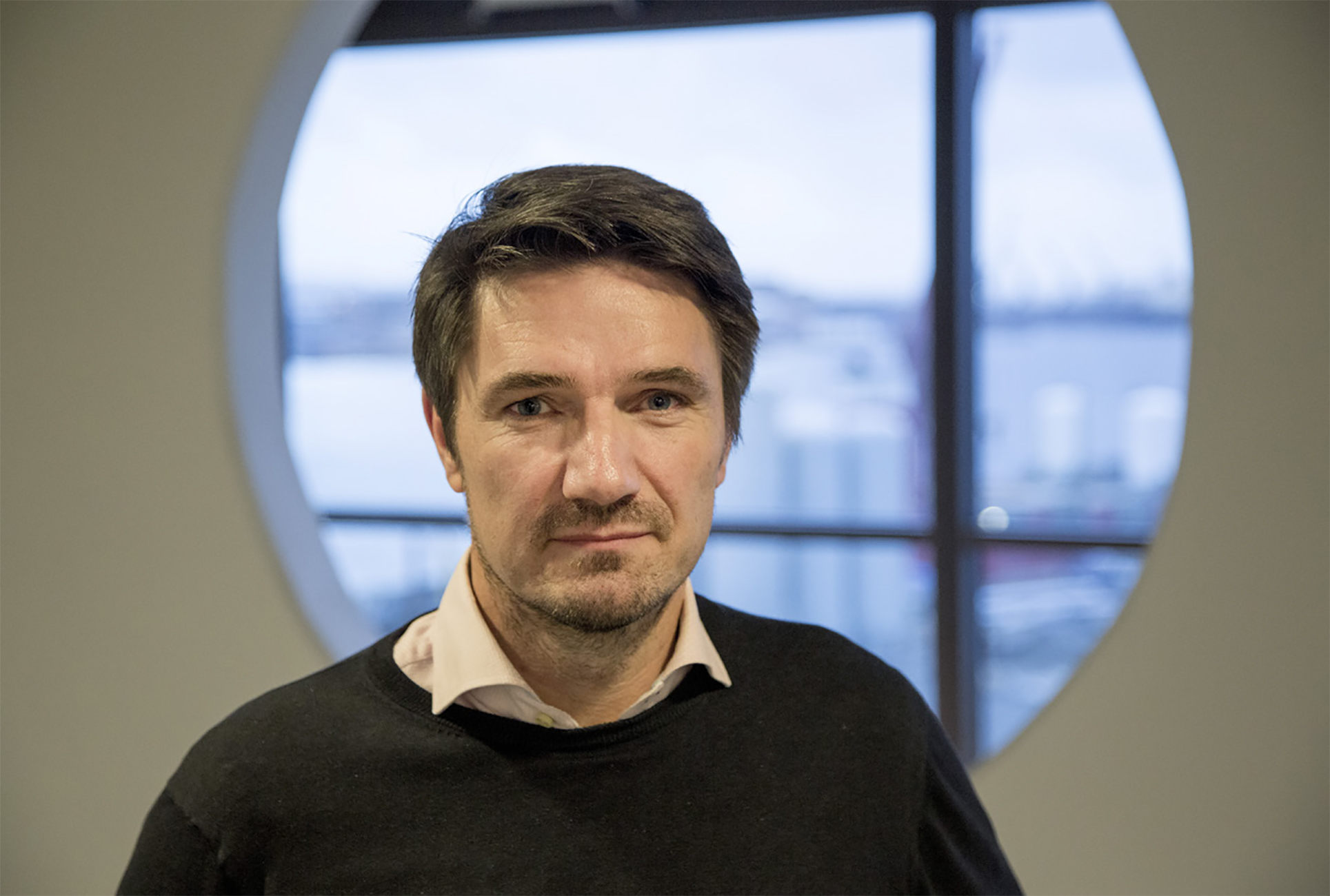 Common good.
“When we manage to reach good agreements on the field, the whole nation benefits,” says Øyvind Gundersen, manager for partner-operated fields at ConocoPhillips.

Support from ConocoPhillips for operator Aker BP and partner Lundin Norway over further development of Alvheim has ranged from technical sub-surface work and well location to negotiations and agreements.

The licensees in this field, where ConocoPhillips has a 20 per cent holding, were rewarded this autumn with the NPD’s IOR prize for 2018.

Many stakeholders have become involved around the field as new discoveries are tied back to its floating production, storage and offloading (FPSO) unit, reports Øyvind Gundersen.

He is responsible for several of the partner-operated fields where ConocoPhillips has interests, and leads work on following up the company’s holding in Alvheim.

“We’ve helped to come up with a good model based on sound principles for the division of value between the Alvheim licence and third-party fields,” Gundersen explains.

“This is a matter of finding balanced solutions which function for all the players, while also ensuring the best possible utilisation of resources in the area. The work has thereby benefited the whole nation.”

ConocoPhillips contributes by transferring experience both from its own operatorships and from other partner-operated fields in its portfolio.

That includes the new inflow control devices (ICDs) and autonomous ICDs which restrict the intrusion of water and gas from the reservoir into the well. Experience from another of the company’s partner-operated fields proved very beneficial here.

“We’re very pleased to be able to contribute to the good collaboration in the licence,” says Gundersen. “That permits quick decisions in such areas as modifying well paths from single to multilateral at very short notice.”

In that context, he points to the occasion when the well and reservoir personnel found an unexpected oil zone in addition to the main column in the Kobra well.

The licence partners were then called together and decided within a few days to drill an additional lateral in the well to access the new zone.

Gundersen also cites a case where ConocoPhillips applied lessons learnt from Alvheim to projects in other licences, including one which involved recovering oil from sand injectites.

The company got Aker BP to accompany it to a meeting with Equinor in order to ensure that experience with such formations was transferred. Another good example of data sharing. 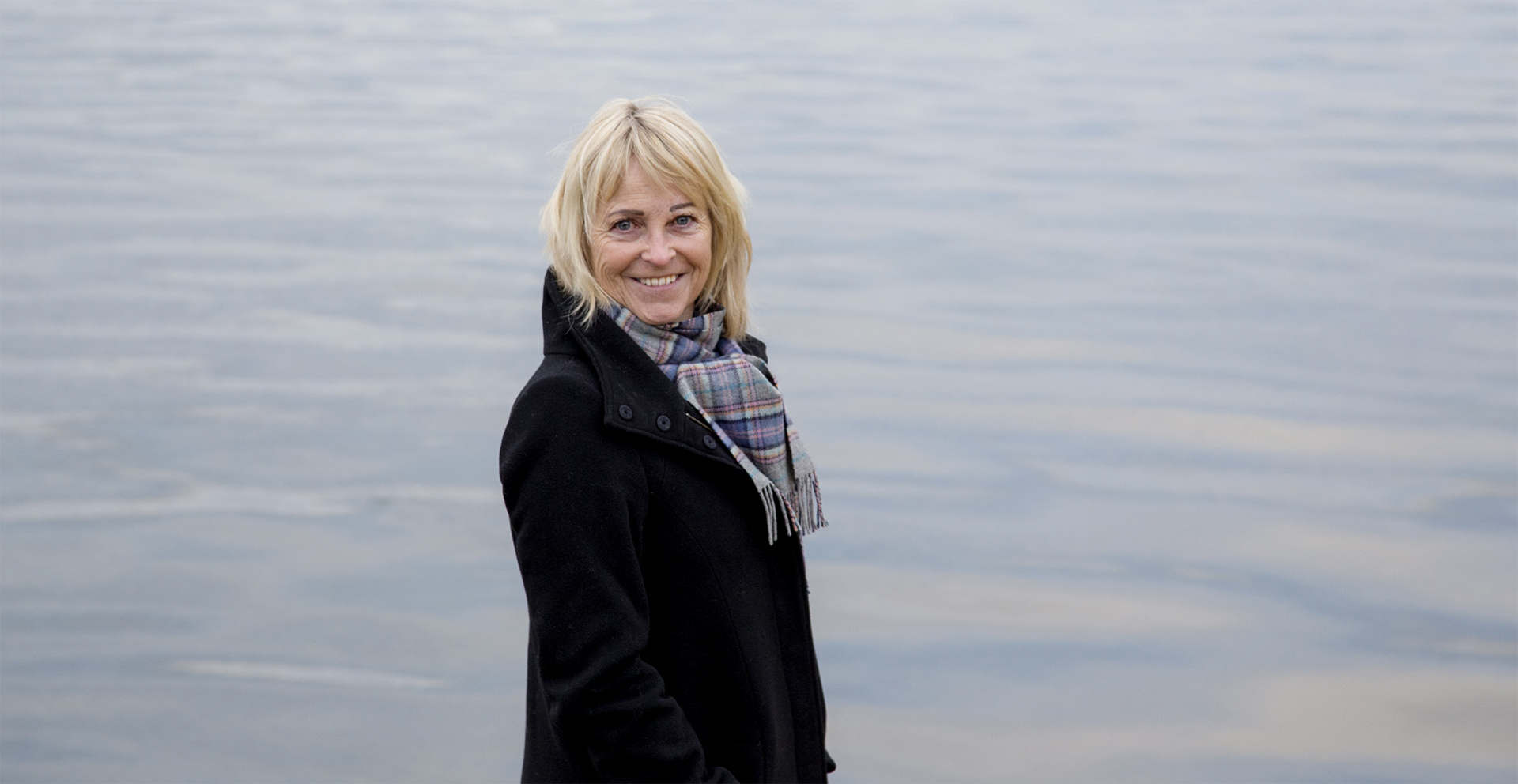 Risk.
“As a company with an exploration image, we’re used to taking risks,” says Tove Lie, manager for partneroperated fields at Lundin Norway. This has paid off on Alvheim.

An assertive role is being played by Lundin Norway on Alvheim. The company has experienced specialists who have built up their knowledge of the field over a number of years.

One of the winners of the NPD’s IOR prize for 2018 alongside Aker BP and ConocoPhillips, Lundin has a 15 per cent stake in Alvheim as well as holdings in most of the surrounding satellite fields.

Alvheim manager Tove Lie and geologist Hans Oddvar Augedal are two of the company’s staff who have contributed actively by sharing knowledge with the other licensees.

“We have experience from various parts of the NCS,” observes Augedal. “This gets transferred to other licences where, for example, only one of the companies is a partner.”

Lie explains that lessons learnt by Lundin on Volund have been applied to Alvheim, and that the company has shared its sub-surface knowledge even though a different partnership is involved.

Augedal adds that continuity has existed among the specialists working on Alvheim over the years despite the big operator and licensee changes which have occurred in the area.

In an early phase, a unitisation model was proposed which would have given all the Alvheim partners holdings in the surrounding satellite fields. But that has changed a little along the way, since the companies have set different priorities.

Lie and Augedal think it is advantageous for the operator, at least, to hold balanced interests across the area. Fortunately, this is how things have ended up.

ConocoPhillips has pulled out of some projects. It now retains only a holding in the Alvheim floating production, storage and offloading (FPSO) unit and not, for example, in Volund and Bøyla.

“This means we’ve had to negotiate a number of demanding commercial deals,” says Augedal. “Since part of Alvheim extends onto the UK continental shelf, agreements have also had to be reached with British interests.”

Lundin has been keen to explore, and supportive of trying new methods – something operator Aker BP confirms. Lie maintains this is a matter of daring to take risks.

As a company with an exploration image, Lundin is used to doing that. Drilling in the Alvheim area has been more or less continuous.

“Aker BP’s drilling team is very good at listening to the sub-surface and reservoir specialists,” affirms Lie. “It stretches itself in a positive way.”