Director Merete Vadla Madland at the National IOR Centre of Norway raised eyebrows among professionals when she declared on its opening in 2014: “70 per cent of the oil in Norwegian fields will be recovered”. The current recovery factor is just under 50 per cent, but Madland is sticking with her bold target. 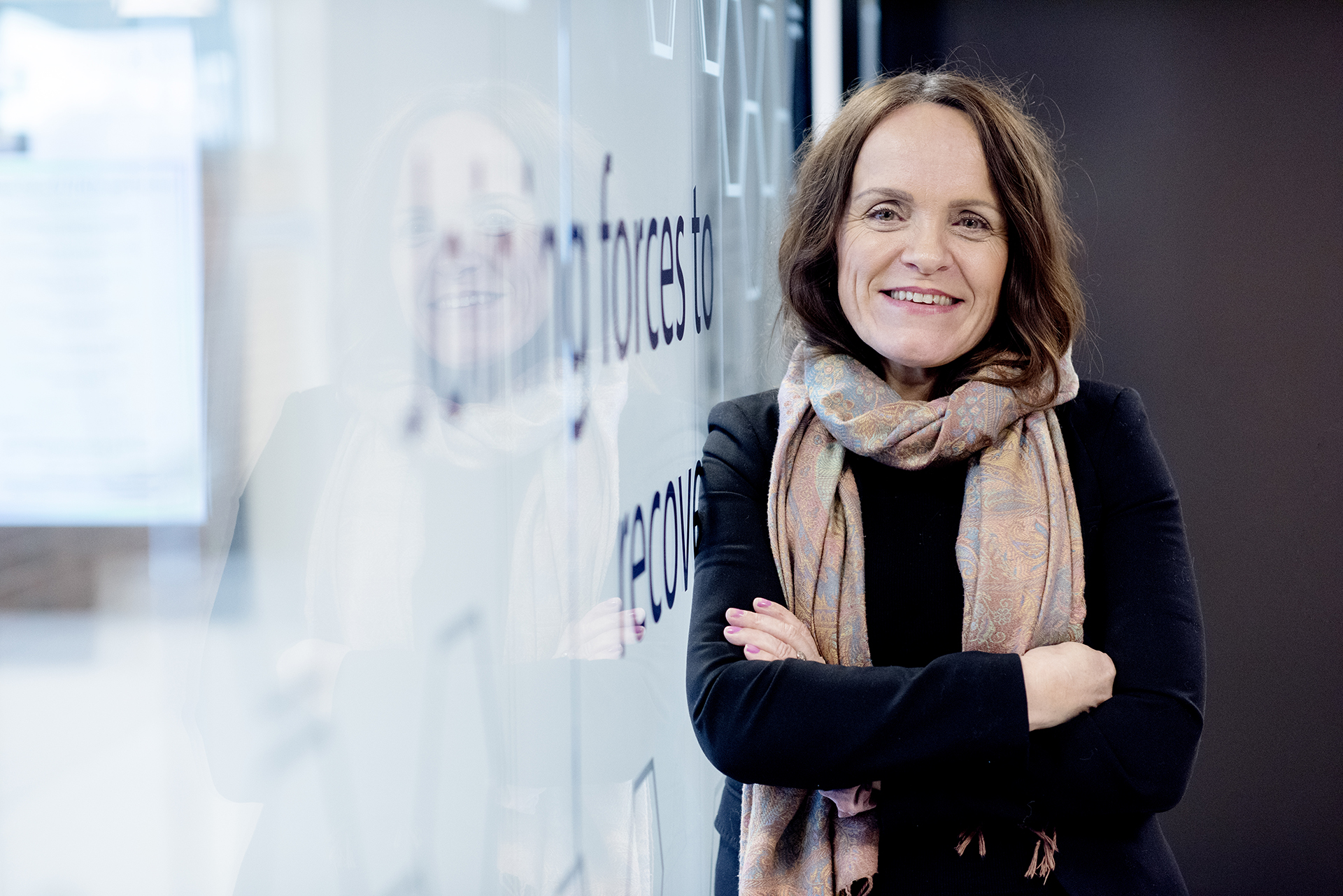 Reservoir sage.
Merete Vadla Madland is director of the IOR centre and a former professor of reservoir technology at the UiS. She is pleased with the positive feedback on the centre’s work and the major IOR conference in late April.

The improved oil recovery (IOR) centre was opened in the wake of a national competition over providing this facility, which was staged by the Research Council of Norway in 2013.

It is led by the University of Stavanger (UiS), with the International Research Institute of Stavanger (Iris) and the Norwegian Institute for Energy Technology (IFE) as partners.

In addition come 11 active industry partners, including both oil companies and suppliers, as well as an extensive network of leading scientists from all parts of the world.

“The special feature of this collaboration is that our industry partners do much more than simply pay for an entrance ticket,” explains Madland.

“Everybody here contributes ideas and constructive proposals – and human resources. Employees in the individual companies are part of the team.”

More than 100 researchers are affiliated with the centre, but she says the figure could equally be 300 “when we include everyone from research teams worldwide who makes a contribution”.

Leader.
Aksel Hiort is research director at the IOR centre, leads work on IOR at Iris and serves as professor of reservoir technology at the UiS. He represents Iris in the centre’s management, where the IFE is also represented.

Crude oil lurks in pores measured at a microscale level in reservoir rocks such as chalk or sandstone, and is recovered with the aid of formation pressure.

When the natural level of that force ceases to be high enough, however, water, gas or both are injected to boost reservoir pressure and thereby enhance recovery.

Even so, large volumes are left in the ground. This is where the IOR centre and its scientists have a job to do in getting even more oil out – perhaps as much as 70 per cent.

Why is that so important? Because it represents billions of kroner in value for Norwegian society and the petroleum industry – and the oil is known to be there.

So it does not have to be discovered first. But new methods or combinations of existing techniques have to be found which make its production possible.

The resource report for discoveries and fields published by the NPD in 2017 identified a big technical potential for IOR on the NCS from the application of advanced recovery methods.

Calculations indicate that commercial production of just 10 per cent of this technical potential would be worth almost NOK 150 billion at a crude price of USD 50 per barrel and an exchange rate of NOK 8 per dollar.

The IOR centre works along two main axes – injection and simulation. The latter makes it possible to see how a reservoir behaves when various types of chemicals and fluids are injected.

To start with injection, the centre’s goal is to identify the optimum methods in this area. Madland cites the North Sea Ekofisk field as an example.

Seawater has been used there since the mid-1980s to wash more oil from the chalk reservoir, and she explains that the centre is working to make this fluid more “intelligent”.

That can be done by adding or removing the natural salts it contains to improve its efficiency – in other words, to reduce the quantities required to recover more oil.

Among many benefits, this will require less energy for injection and ideally leave the injection water behind in the reservoir.

If part of the intelligent water does return to the surface, it can be incorporated as an ingredient in producing more of the fluid and thereby get re-injected.

Madland reports that the centre is also working on injecting polymers. These are chemical compounds which act to “thicken” water so that its viscosity increases.

Best suited for sandstone, polymer injection offers an effective approach and can displace more of the remaining oil than water alone.

That has been demonstrated in other places, but challenges also exist. The centre is seeking an efficient and degradable biopolymer which does not harm the marine environment.

Big financial value is usually at stake in the petroleum sector, so testing different injection methods to establish that they work before adoption offshore will be important.

One challenge with polymers, for example, is that they can be destroyed by a narrowing of the piping system used to direct the fluid down to the reservoir.

Valves could provide such pinch points. So testing the optimum valve configuration will be important to avoid polymer properties being damaged before they even reach the rocks where the oil lies.

The first full-scale test organised by the IOR centre was successful and produced high-quality data which have been presented both at conferences and in scientific journals.

Such large-scales trials are expensive and very difficult to stage. Testing in this format would have been impossible without collaboration between scientists and industry partners affiliated to the centre.

The next step will be to check out large oil-saturated sand packs to establish how much additional crude can be recovered with the aid of polymers.

Madland reports that the experiment could be done in two-three weeks. What takes time for the scientists is determining the setup which can answer the questions they and the industry have.

Large-scale testing could be the crucial step towards an offshore pilot project. The goal now is to launch one on a field within the next two years. 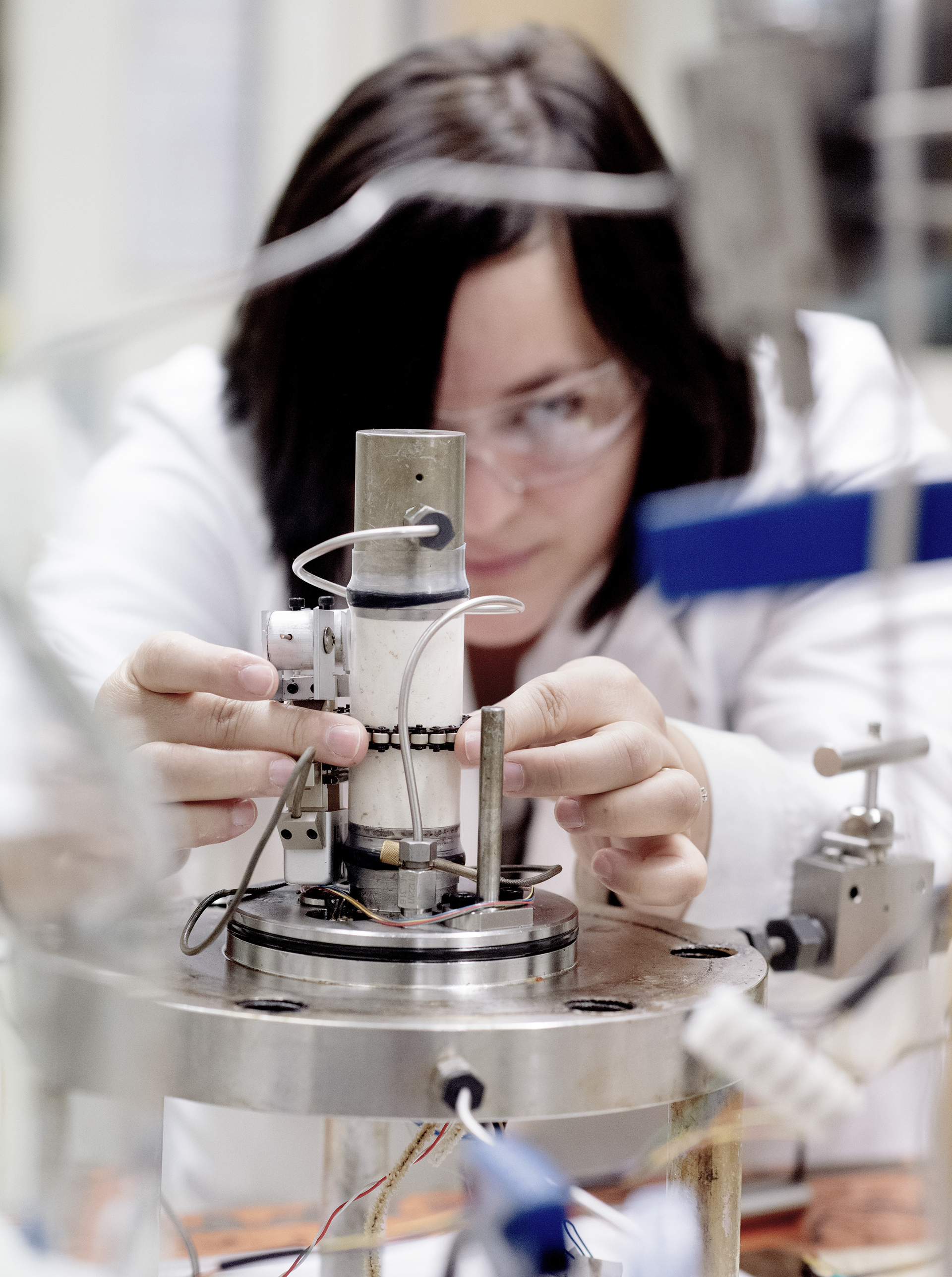 Simulator.
Emanuela Kallesten working with a triaxial cell which she uses to test cores under genuine reservoir conditions. These cells make it possible to simulate any reservoir history on the NCS. The geomechanics lab at the UiS has 12 of them.

One key to effective injection is knowing how the intelligent water or polymer behaves down in the reservoir. That must be simulated.

“Our scientists have developed a fantastic simulator known as IOR-sim,” explains Madland. “This is linked to data tools already used in the industry.

“Information entered in IOR-sim generates results which show how efficient the various injection fluids are in different types of reservoirs and their potential for improving recovery.

“A great deal of complex technology development underpins this simulator, but it doesn’t perhaps sound so difficult when it’s all assembled in a dedicated app.”

She emphasises that one particularly important prerequisite for the role envisaged for this solution is a commitment by the companies to share their data.

Although all petroleum fields possess their special characteristics, they also have many features in common. On a global basis, for example, 60 per cent lie in carbonate rocks.

Where the NCS is concerned, that applies particularly to the chalk fields at the southern end of the Norwegian North Sea sector.

The IOR centre accordingly balances its work between these two formation types.

A goal when establishing the centre was to offer places for 20 PhD students. “We already have 20 of them in position after just four years,” Madland says proudly.

The first of these publically defended their thesis just before last Christmas, she adds. “Our students are extremely able. We expect six-seven more theses to be defended in 2018.”

Efforts are also being made to establish more post-doctoral fellows. Nineteen are currently affiliated with the centre, and Madland wants at least five more for the next three years.

Openness and visibility are important goals for the centre, and represented a requirement when the national competition to establish it was advertised just over five years ago.

Madland is extremely concerned to share, quoting the Bible’s admonition to “give, and it shall be given unto you”.

“Sharing is ambitious,” she explains. “If we’re going to have something to share, we must be clever – we must ensure that we’re right in the forefront of our field.”

She emphasises that such sharing was a guiding principle in her academic education and was emphasised by her professor, Rasmus Risnes at the UiS.

“Getting hold of data is an incredibly energy-consuming process,” Madland notes. “A number of the companies want to keep their information to themselves.

“That challenge was overcome by ensuring that our partners don’t agree to general data-sharing, but contribute project-specific information.

“And when we get such data, we must show the companies that we’re able to utilise them. It’s important to demonstrate that we can deliver useful solutions which could be beneficial.”

Visibility is achieved in part through the annual IOR Norway conference and the roughly 550 journal articles and conference papers published so far.

Organised in Stavanger by the centre, the conference brings together the world’s leading specialists in this research field and has become an international event.

Speakers queue up to present papers there. This year’s programme took place on 24-25 April under the slogan of “smart solutions for future IOR”. 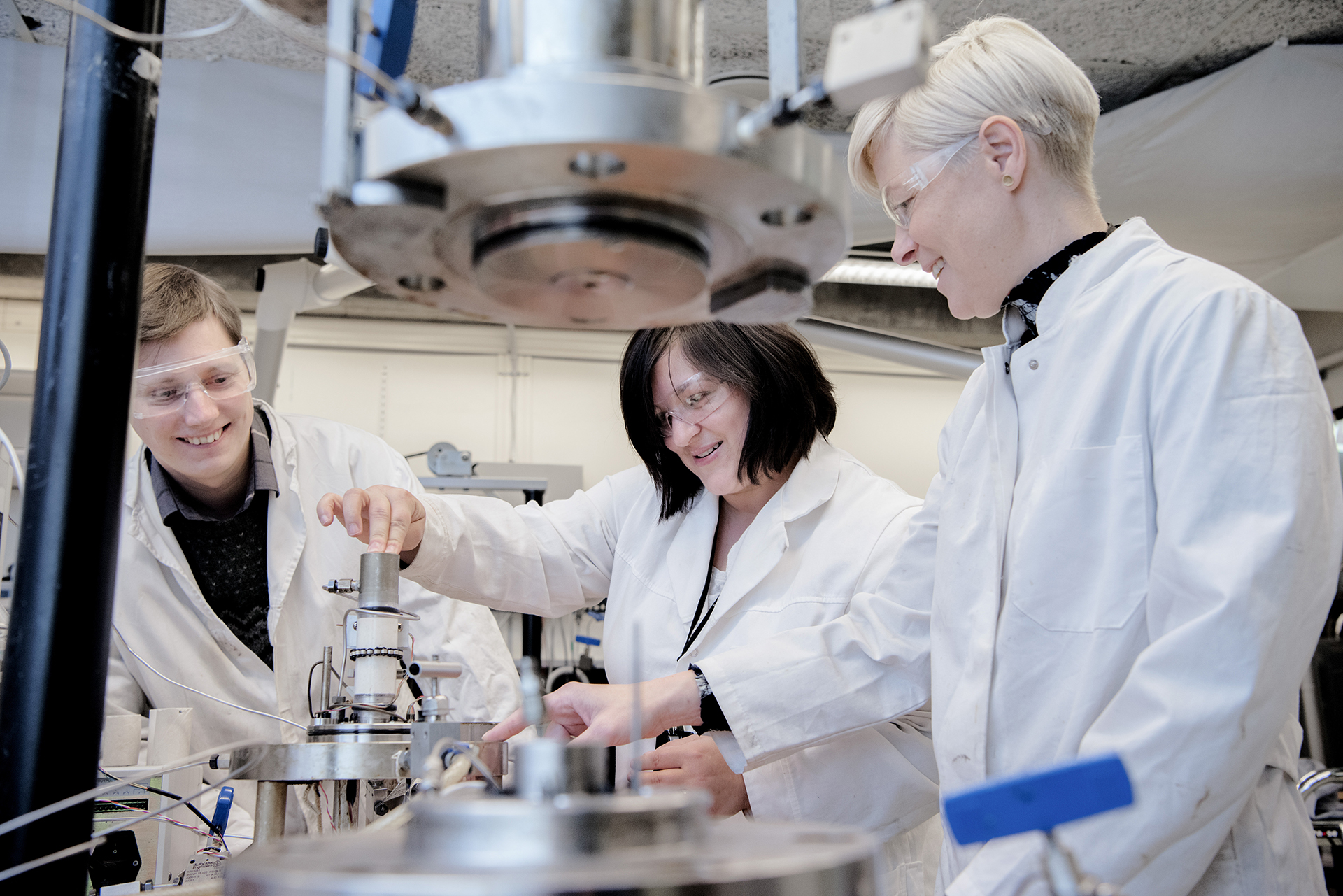 Doctorates.
Dmitry Shogin (left) has a PhD in mathematics and physics, while Emanuela Kallesten (centre) and PhD student Mona Wetrhus Minde each holds an MSc in petroleum geology.

The IOR centre was established in late 2013 on the basis of a government White Paper, initially for five years. This could be extended to eight years in all after a mid-term evaluation.

Immediately before the IOR conference ended, the research council confirmed that the centre would have its funding continued for the additional three years.

This followed the assessment carried out by a panel of experts, which reviewed a quantity of documents and interviewed both management and students. Its report concluded that the centre is a strong and well-managed facility.

“We’re ready for the final three years,” says Madland. “With the financial support from the council, we can continue to deliver outstanding research on IOR.”