Getting more gas through

The Aasta Hansteen platform has been towed out to the Norwegian Sea, and production is due to start flowing within months from this field to mid- Norway’s big new gas hub. 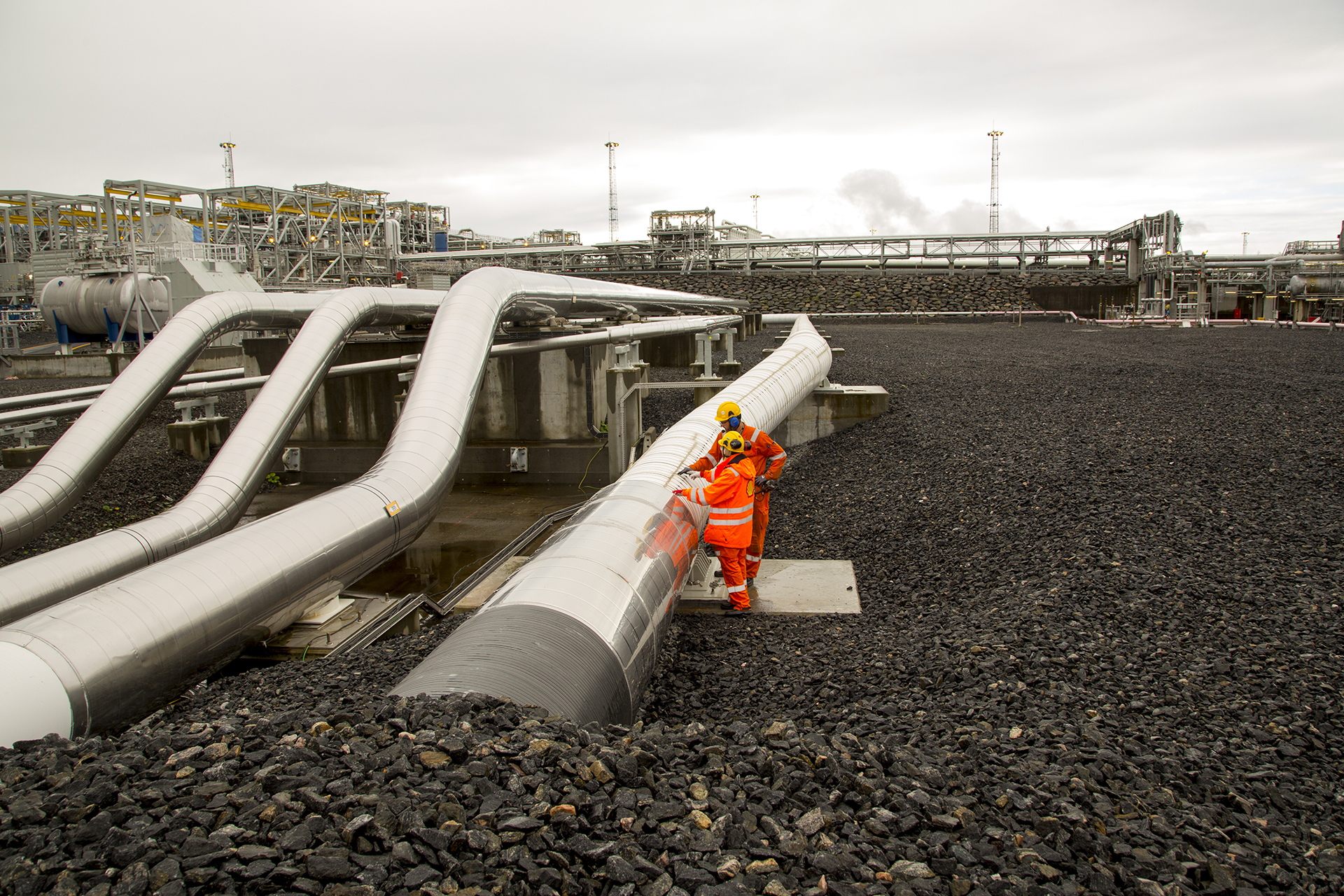 A flock of herons lurk among the big spruce trees which edge the beach by the Nyhamna processing plant in Aukra local authority on the west Norwegian coast, not far from Molde.

These stately birds can observe that a huge new pipeline has arrived at a facility whose recent expansion has been hailed as Norway’s largest landbased industrial project of the past decade.

The concrete-coated steel tube ascends from the seafloor and into a giant pile of rocks on land, where it joins three existing pipelines.

These have been serving the Ormen Lange field in the Norwegian Sea for a decade. The newcomer is also pressurised with Ormen Lange gas at present, but will soon be carrying output from Aasta Hansteen further to the north.

This brand-new Polarled facility runs for 482 kilometres from field to receiving terminal, where the gas will be processed before onward transmission through the Langeled pipeline.

The latter exports gas for 1 166 kilometres via the Sleipner fields in the North Sea to the UK, helping British consumers to enjoy "a nice cup of tea" and to warm their homes. Gas can also be sent from the Sleipner hub to other European consumers.

This timetable assumes that everything goes according to plan. That certainly looks like being the case, with the field coming on stream in the fourth quarter of 2018.

“Ormen Lange has delivered gas to the UK via Nyhamna and Langeled for a decade,” reports Kalmar Ildstad, assistant director for the Norwegian Sea in the NPD’s development and operations area.

“This field accounted for the largest proportion of gas produced from these waters in 2016, at 43 per cent, and will remain an important supplier.”

He adds that Langeled is an example of the way establishing new infrastructure in an area generates interest in and a willingness to pursue further exploration and development there.

“It also made the Aasta Hansteen project viable by providing an export opportunity. Polarled in turn allows further gas resources in the eastern Norwegian Sea to be tied in.”

A case in point is today’s Dvalin project, with its gas due to be exported via the new pipeline. “The NPD wants to see continued exploration and maturation of discoveries,” emphasises Ildstad.

“These can then take advantage of future spare capacity in the transport systems in a cost-effective manner, and thereby create added value.” 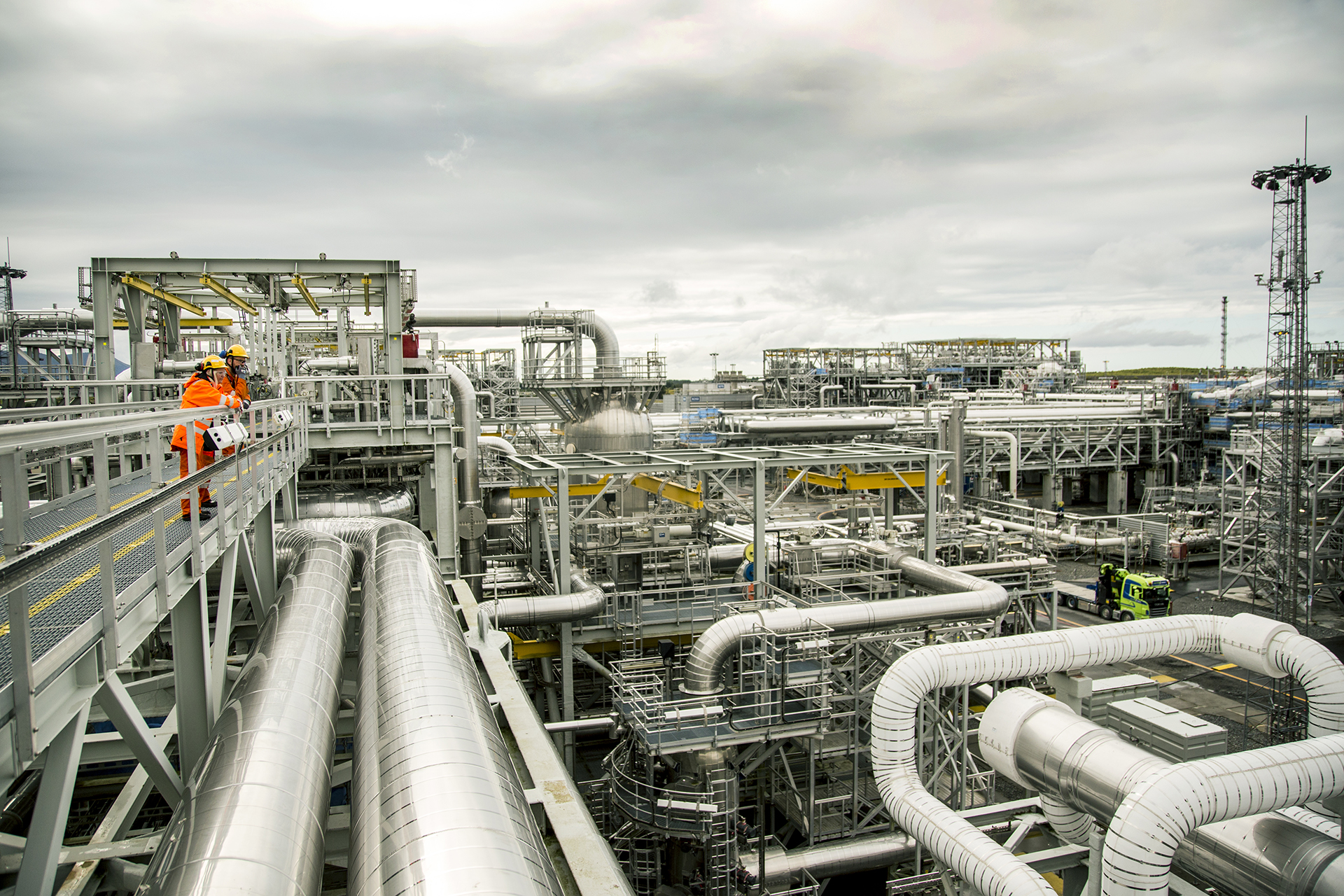 Anniversary.
The Nyhamna plant could celebrate a decade of operation in the autumn of 2017. To mark the occasion, all the residents in Aukra local authority were invited for a tour of the giant facility.

Ormen Lange and the Nyhamna plant reached their 10th anniversary last year, and then-operator Shell invited all 3 500 residents in the local authority to join the celebrations on 30 September.

Aukra doubled its population during the construction period, and numbers swelled markedly again when the expansion project began in 2014. At peak, this job engaged some 1 500 workers.

It is no secret that the gas plant was very welcome to Møre og Romsdal county, in which Aukra lies, and that many forces were mobilised to bring the pipeline landfall there.

Gassco took over on 1 October 2017 as Nyhamna operator from Shell, which continues to provide technical services at the plant and which has worked to maintain good relations with the locals.

Shell project director Mark I Wildon is proud of what has been achieved: “I’ve been running Norway’s biggest hotel at times – our own work camp, providing some 1 600 beds in single rooms with en suite facilities.”

He reports that the company has made a big investment in this accommodation, in order to create a pleasant living environment there.

Shell has also been very concerned to ensure local value creation and spin-offs, because it sees that this has a positive impact on the project.

Work was divided into small packages so that local companies could compete. More than 50 mid-Norwegian companies secured jobs worth a total of NOK 500 million. “That’s a substantial contribution to local industry,” Wildon observes. 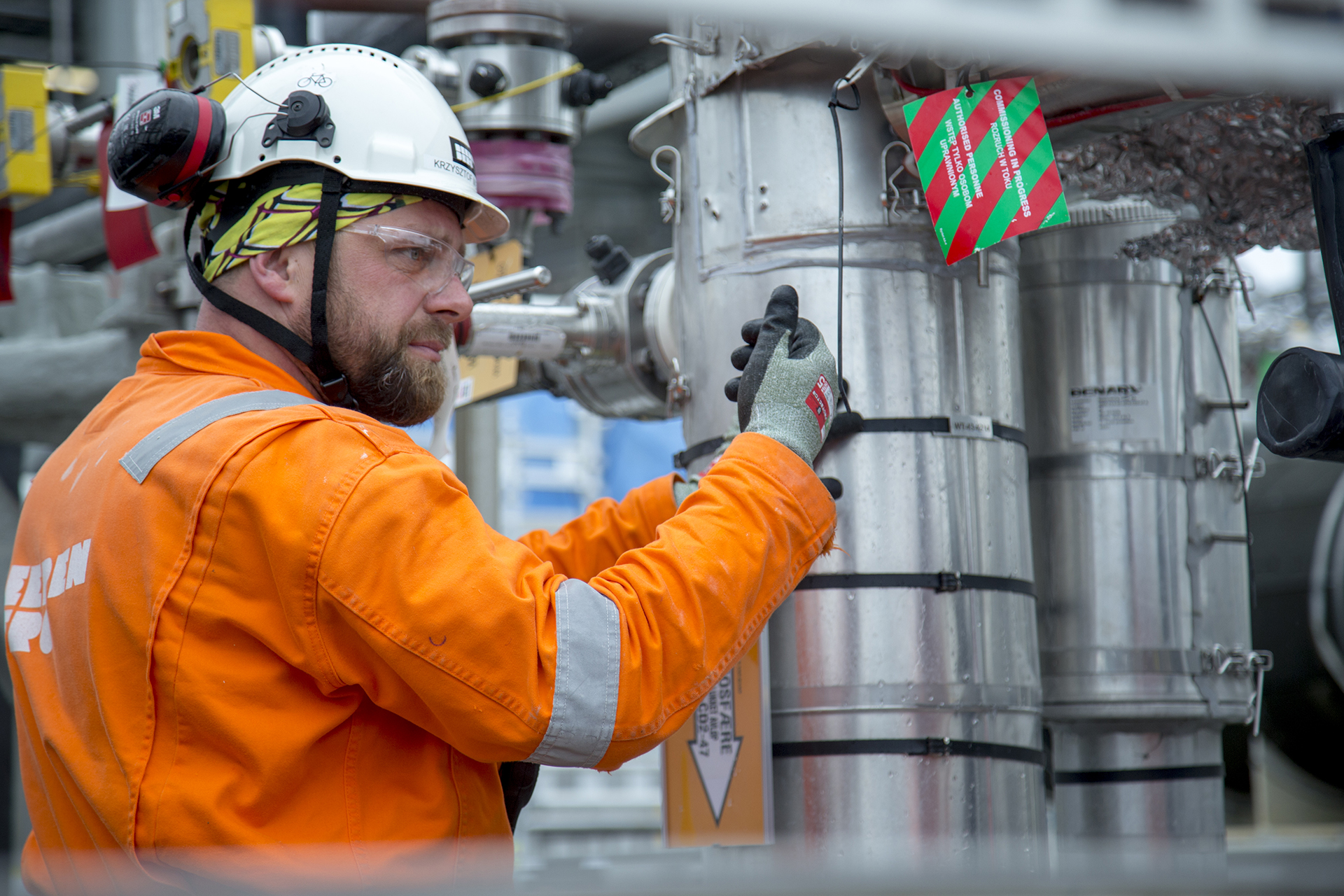 Insulation technician.
Krzysztof Mierzwinsky working for Beerenberg on insulating the new reception module for Polarled and Aasta Hansteen at the Nyhamna plant.

More than 700 people have gone through Shell’s safety training programme for the plant. While most have been Norwegians, a number of other nationalities are also represented.

“Most were highly skilled,” says Wildon. “Our job was to teach them how to work in a fully operational gas plant. Ensuring that they stayed safe has been one of our biggest challenges.”

Nyhamna has also made a solid contribution to skills acquisition, with some 80 apprentices doing the practical part of their training there.

The plant’s capacity is currently 70 million standard cubic metres per day (scm/d). To handle output from more sources, that figure must be raised for gas from Ormen Lange by compression.

“Increasing the pressure allows us to accept gas from additional fields, including Aasta Hansteen,” Wildon explains. “At the same time, we improve recovery from Ormen Lange.

“Thanks to the expansion project, processing capacity can rise to 84 million scm/d – the same amount Langeled is dimensioned to transport.” 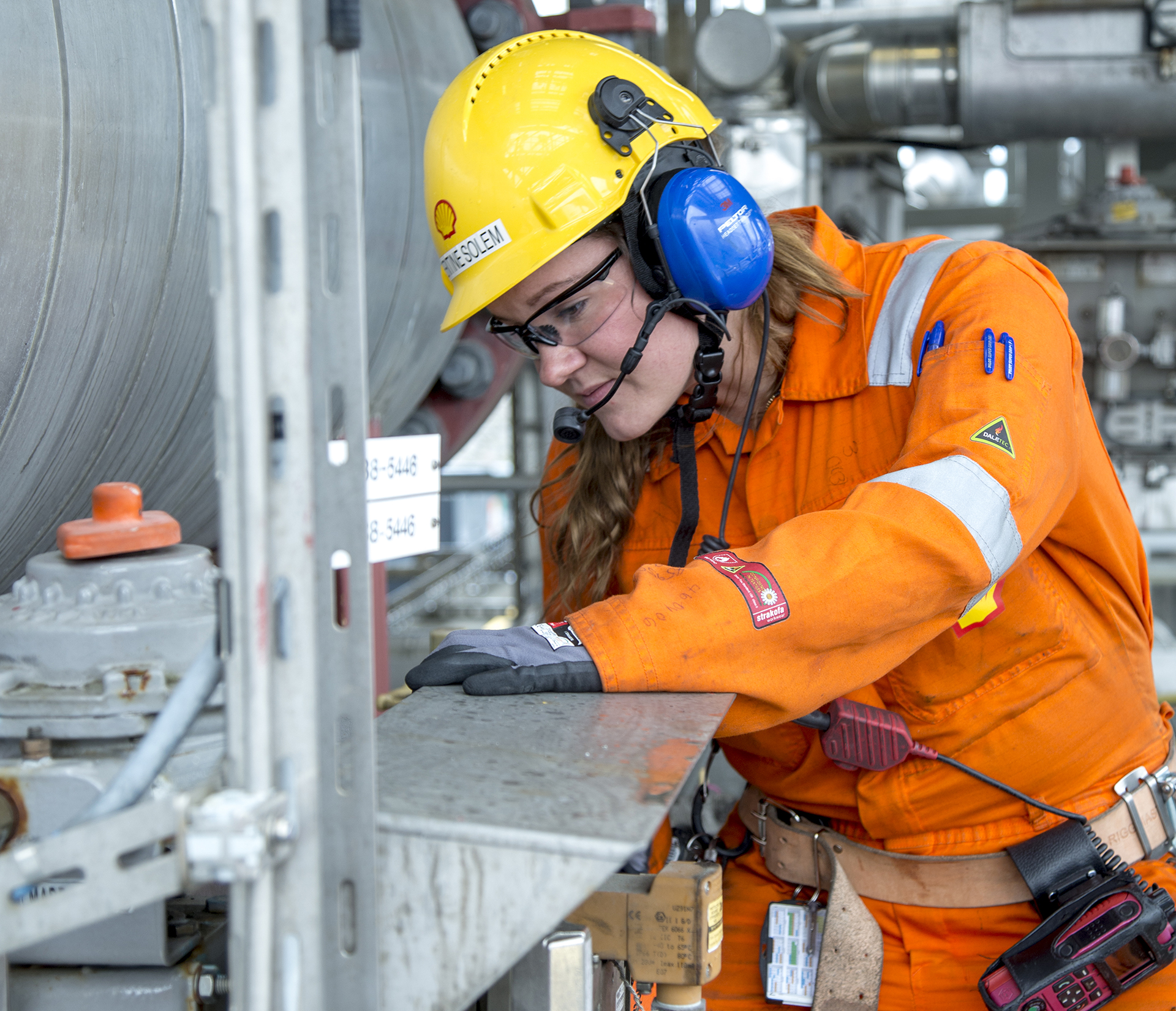 Apprentice.
Bertine Solem was the first apprentice at Nyhamna, and is happy working there now as a contract process technician. 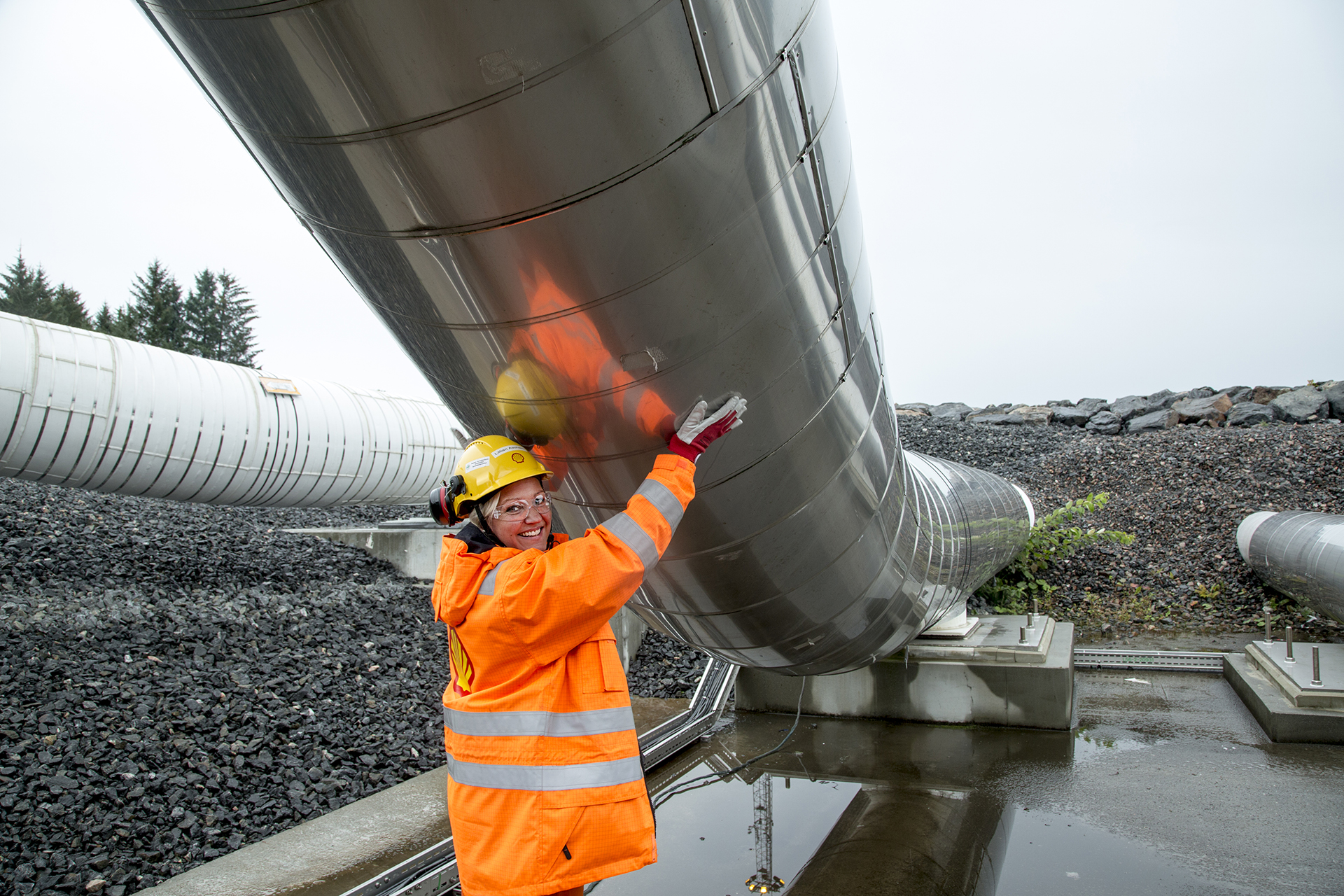 Proud.
Communications manager Lillian Aasheim is proud that Ormen Lange has been on stream for 10 years. Its gas enters Nyhamna in part through this pipeline. The new Polarled inlet pipe can be seen in the background.

Modifying the plant has involved a combination of large and small components, he says, including several big modules with a total weight of 22 500 tonnes. The largest came to 2 500 tonnes.

Total deliveries have almost doubled the weight of equipment at Nyhamna. In addition, a great many adjustments have been made to the existing facility.

Roughly 300 connections link old and new at the plant, calling for accurate work. As much as possible was completed at the fabricators, so the new units could just be slotted into place.

Technically speaking, challenges have been faced with building the foundations for new installations at a plant in full operation.

Polarled enters the plant only two metres from the nearest pre-existing pipeline. And more than 10 tonnes of explosives have been used without halting production.

“You have to be an experienced blaster to manage that,” Wildon says. “It calls for great understanding of the explosion created, the resulting vibrations and protecting the surroundings.”

He reports that 35 000 cubic metres of rock have been removed from Nyhamna with the plant still operational. Nor has welding work been entirely hazard-free in the heart of a gas facility.

“Our construction strategy was to minimise welding,” Wildon says. “We broke the project down into 54 modules assembled in the UK, Poland and China, and at Stord and Verdal in Norway. They were then moved here on huge lorries and installed.”

Asked whether he can confirm that this is Norway’s largest industrial project on land, Wildon says he lacks the relevant statistics. “But I can say it’s been very big.”

He reports that about 7 000 people have been involved at the plant. On its own, that makes this Shell’s largest project in an existing facility worldwide. Nobody has been able to tell him of a bigger one.

Wildon is very pleased about the collaboration with Kværner and the big deliveries from this Norwegian fabricator. Eighty per cent of the project value has gone to 150 suppliers in Norway.

Major challenges were faced in designing equipment and modules to fit an existing plant and satisfy the requirements set for the expansion.

Demanding design and construction methods have characterised the project. Many of the modules are 20-40 metres long, weigh several thousand tonnes and must nevertheless fit precisely. Dimensional control is very important in such a process.

“Shell’s been in Norway for 105 years, and has contributed to developing much new technology over this time,” says Wildon. “We helped to build Troll A, the tallest structure ever moved by humans, and we’re also very proud of what we’ve achieved at Nyhamna.”

The herons in the spruces outside take wing and fly off over the open sea. In April, if they are lucky, they might see a cylinder-shaped platform passing on its way to Aasta Hansteen.