Status of fields no longer on stream

At 1 January 2017, the Norwegian continental shelf had 80 fields on stream and 23 no longer in production. The NPD expects a further 10-20 to shut down towards 2020. Fields approaching cessation are primarily small, with simple development solutions and relatively short producing lives. Some large fields which have long been on stream and now produce small volumes are also expected to shut down by 2021.

The 23 fields which have shut down accounted for six per cent of total production up to 2016.

Viewed in isolation, it might seem dramatic that up to 25 per cent of the fields currently on stream could cease production over the coming five years. But their collective output is so small that it adds only marginally to the total.

Only two per cent of production derives from fields which have shut down or are likely to do so by 2021.

The figure below shows petroleum production from fields which have ceased production. Frigg, the biggest of them, ranks as the 20th largest field on the NCS. 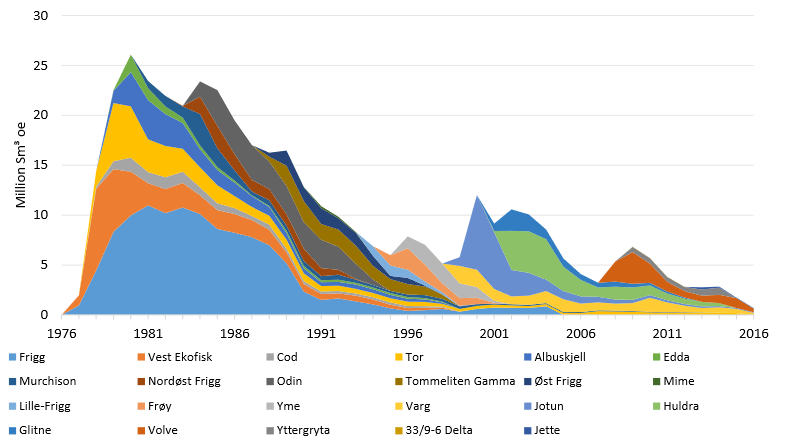 Production from fields is at its highest in their first few years on stream (Frigg and Murchison straddle the Norwegian-UK boundary – resources shown here are only Norway’s share).

Historical data clearly show that most of a field’s production occurs during its first few years on stream. Many fields then continue to produce at a substantially lower and declining rate until such output is no longer profitable.

The commercial life of facilities which are no longer producing themselves may be extended if they can function as host installations for other discoveries in the area. That makes it important to explore all opportunities for utilising such facilities before a final disposal decision.

The Ministry of Petroleum and Energy takes disposal decisions and sets deadlines for executing them.

When a facility shuts down, its production ceases, wells are plugged and preparations are made for disposal. It is then removed in one or more stages.

In some cases, parts of the facility have to be left in situ after being cleansed and marked. Large and extensive disposal projects take several years to implement.

Murchison and 33/9-6 Delta are not included in the overview above. While Murchison has been developed in the UK sector of the North Sea, 33/9-6 Delta is a discovery where test production took place and has now ceased.