Total petroleum resources on the NCS were estimated at 14 284 million scm oe at 31 December 2016. The NPD’s resource accounts provide an overview of total expected recoverable petroleum, including amounts yet to be discovered. They build on information reported to the NPD by the operators as well as the directorate’s own data.

Reserves are oil and gas resources sanctioned for development.

Resources are oil and gas proven and expected to be recovered, but not sanctioned for Development.

Undiscovered resources have not been proven and are not discussed in this report. See the resource report for 2016 for details about them.

Undiscovered resources in Norway’s Barents Sea sector have almost doubled after new mapping in the eastern part of Barents Sea North. The results of this work were published on 25 April 2017, and will first be incorporated in the resource accounts for 2017 due to be published in February 2018.

Possible additions to the resource accounts

Large quantities of petroleum are excluded from the resource accounts because they are either non-commercial or not technically recoverable today. Maturing and adopting technology could also make part of these resources profitable. This is referred to here as the technical potential.

Estimated resources up 40 per cent since 1990

Greater knowledge and new solutions have increased estimated resources on the NCS by 40 per cent since 1990. A number of fields have more than doubled their resources since the first production estimates were made. 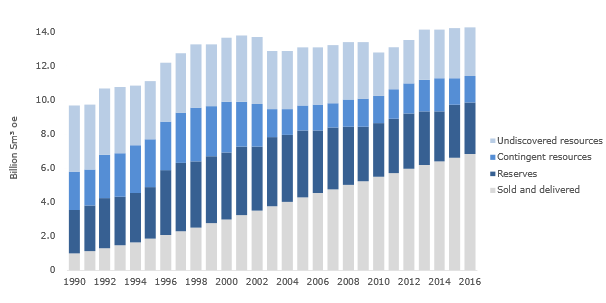 The NPD has established an ambition for increasing reserves in 2014-23 by 1 200 million scm of oil. This is intended to ensure that attention is focused on expanding reserves while making it possible to follow up developments systematically.