The Norwegian Petroleum Directorate’s production forecast up to 2023 shows an increase from 2020. Start-up of new fields, including Johan Sverdrup, will more than offset the natural reduction from operating fields. Total production of oil and gas is projected to approach the record year of 2004, with gas accounting for about half. It will be challenging to maintain such a production level up to 2030. 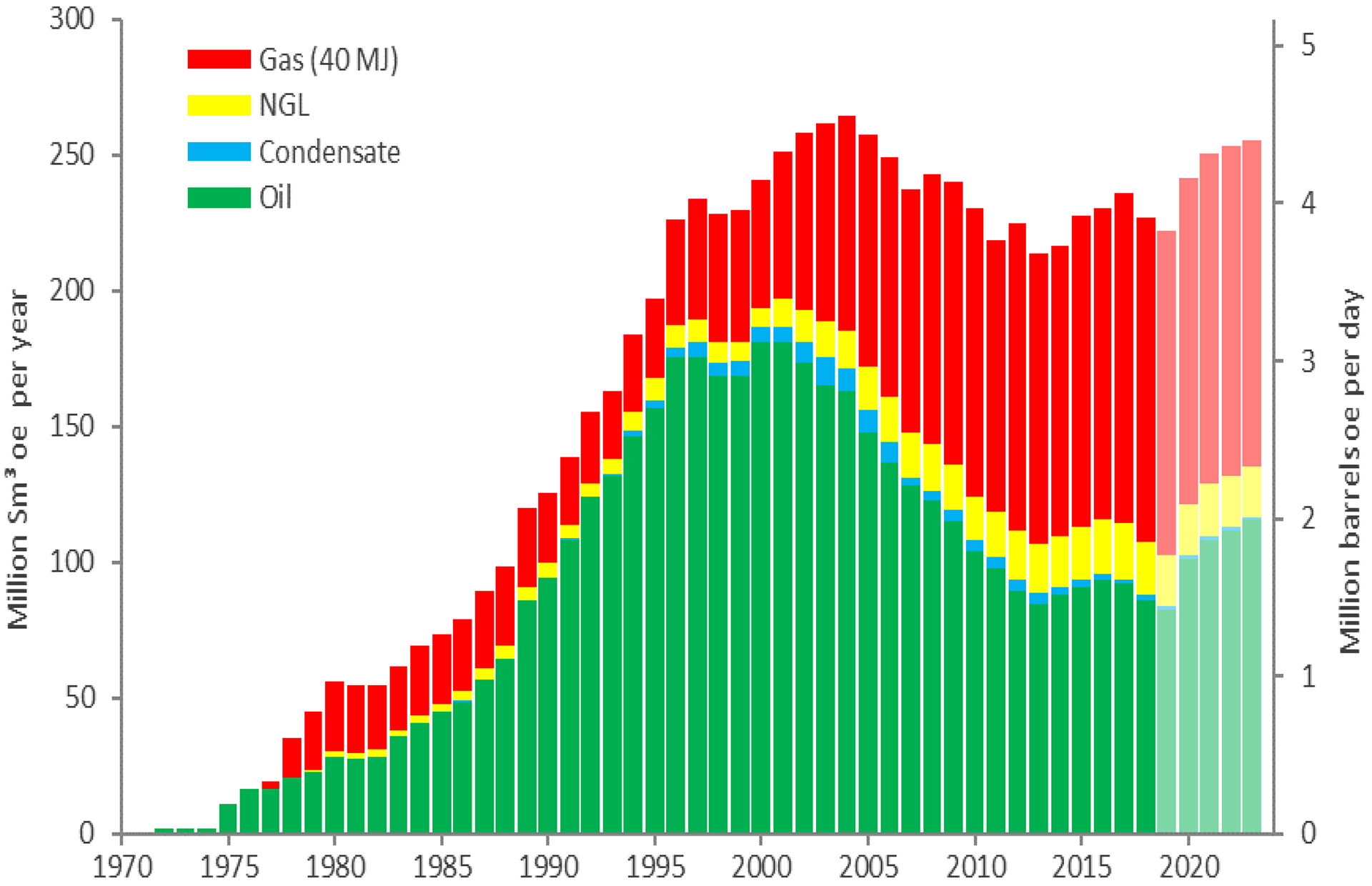 Preliminary figures show that 226.7 million standard cubic metres oil equivalents (Sm³ o.e.) were sold in 2018. This is 9.5 million Sm³ o.e. or 4 per cent less than in 2017. Gas sales are somewhat reduced and certain oil fields have produced less than expected. Total production of petroleum in 2019 is expected to be 222 million Sm³ o.e.

In 2018, 121.7 billion Sm³ gas (119.3 billion Sm³ 40 megajoule gas) was sold. This is a slight reduction from the record level in 2017. The forecast for short-term gas sales (Figure 2-2) shows an expected high and stable level with a slight increase over the next few years. 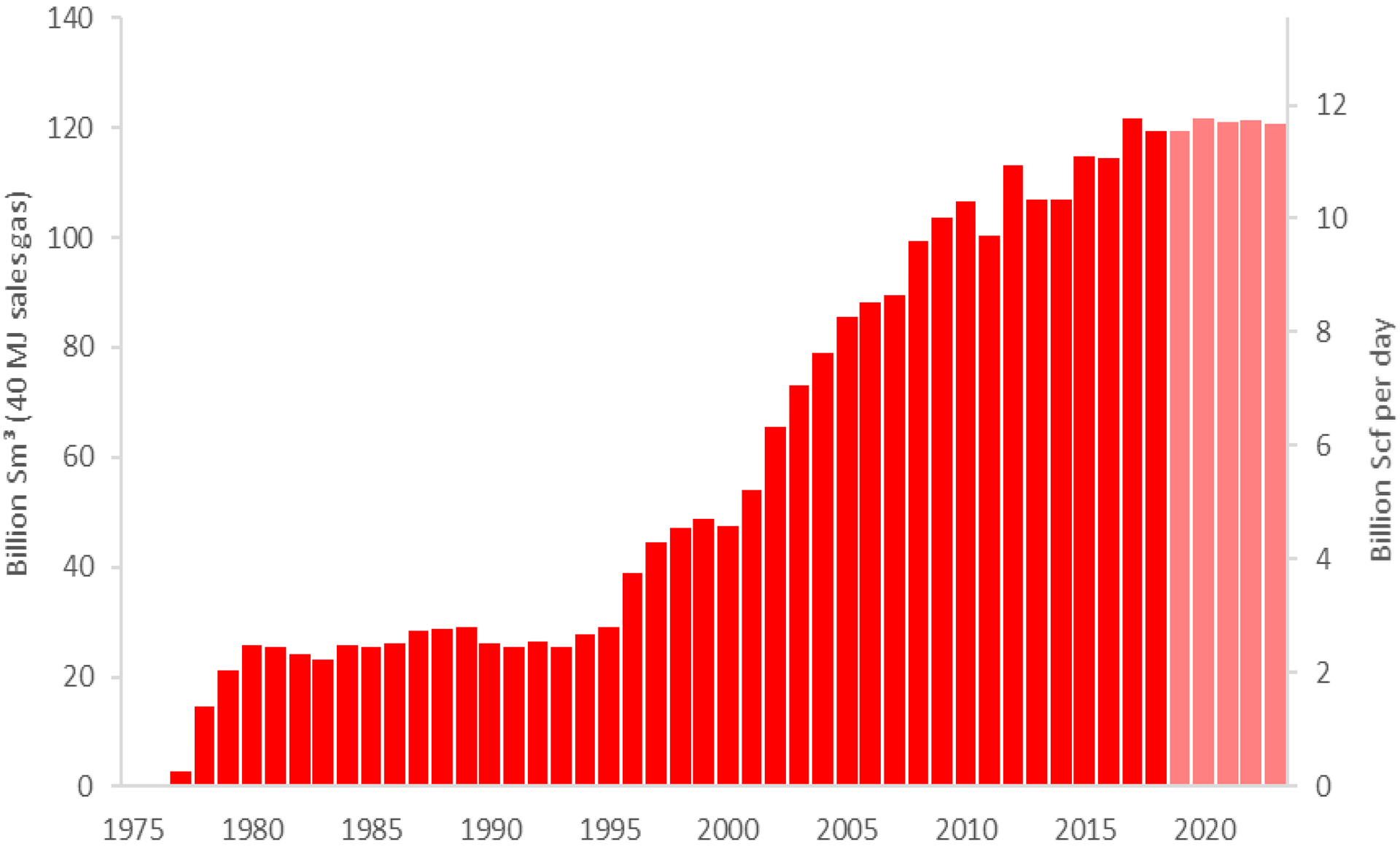 For 2019, we estimate that oil production will be reduced by an additional 4.7 per cent, to 82.2 million Sm³ (1.42 million barrels per day). Production is expected to show a substantial increase in 2020, e.g. as a consequence of Johan Sverdrup. The uncertainty in the production forecasts is mainly linked to the drilling of new wells, start-up of new fields, the ability of the reservoirs to deliver and regularity for producing fields.

Production from operating fields and approved projects accounts for 90 per cent of expected production in the five-year period 2019-2023 (Figure 2-3). The remaining ten per cent are primarily expected to come from improved recovery measures on the fields. Wells that have not yet been approved and optimisation of recovery strategies are the main contributing factors. Towards the end of the five year period, production is also expected from discoveries which do not yet have a firm development decision. 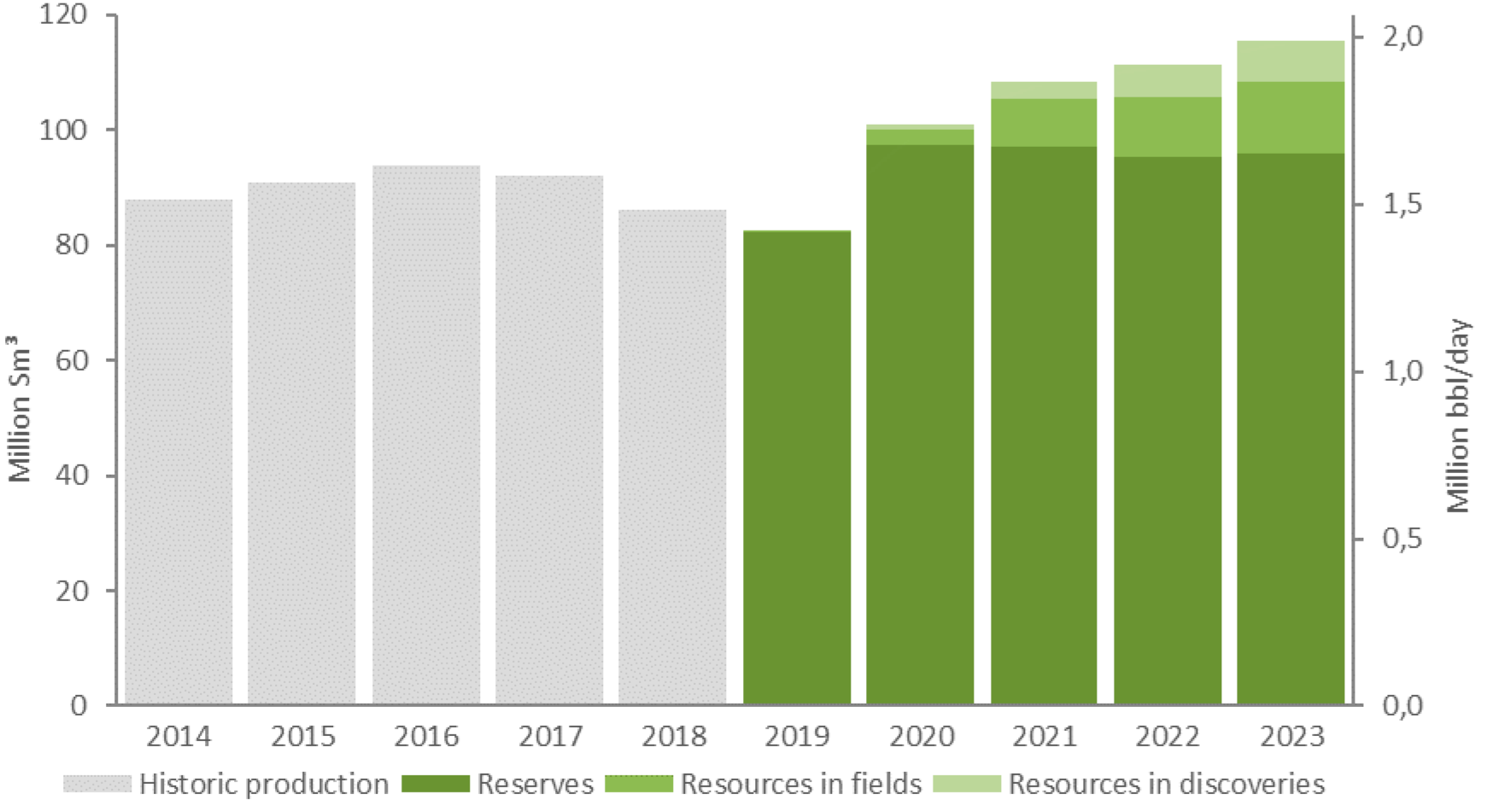 Production will remain relatively high over the next decade and going forward to 2030, production from undiscovered resources is expected to have increasing significance.

Figure 2-4 shows the most recent production forecast compared with what was presented one year ago, in The Shelf in 2017. The forecast reveals a relatively flat production development up to 2020. As from that time, it is assumed that all projects currently under development will contribute to a considerable production increase up to 2023.

The production level is somewhat lower in 2019, compared with the previous forecast; approximately unchanged in the period from 2020-2025 and somewhat higher going forward to 2030. The increase in the estimate up to 2030 compared with last year’s forecast, is due in part to the fact that more new measures have been identified on the fields; mainly more wells included in the forecasts.