The NPD has used both new and older data sets in mapping eastern parts of Barents Sea North. It acquired some 70 000 kilometres of 2D seismic lines in Barents Sea North during 1973-96. While the quality of many older data sets is poor, they can provide useful and complementary information when combined with new surveys. The NPD acquired 32 600 kilometres of new 2D seismic data in the area during 2012, 2013 and 2014, primarily in the eastern part (figure 5). It also acquired some 6 000 kilometres of 2D seismic in 2016. Processing of these data had not been completed at the time of writing, but they will be incorporated in the continued evaluation.

While the quality of the new data sets is considerably better than the previously, limitations remain with the seismic resolution in the deeper parts of the sedimentary basins. Seismic multiples from the seabed and other noticeably hard reflectors in the sedimentary succession also present mapping challenges. Data quality is generally poorer towards the west, often related to water depth and to which geological strata outcrop at the seabed. The mapped area in relation to data coverage is shown in figure 5. The area is bounded towards the west by poorer data quality, and towards the north where the sedimentary basins thin out.

The line coverage of the new data sets varies, but generally decreases towards the west.

Coverage is about 4 by 10 kilometres east of the 32nd meridian, and averages roughly 15 by 20 kilometres in the remainder of the mapped area after the 2016 survey. In the western parts of Barents Sea North, currently excluded from the resource calculation, line coverage of the new seismic data is roughly 45 by 45 kilometres.

Uncertainty exists over the dating of the various seismic reflectors. Many geological strata are significantly eroded, and wells in Barents Sea South are a considerable distance away. The nearest is 7325/1 (Atlantis). The age of the interpreted reflectors largely builds on cores obtained by shallow stratigraphic drilling (see the fact box) in Barents Sea North (during certain seasons from 1990 to 2015). Coring is conducted where seismic reflectors crop out at the seabed. Shallow cores have been acquired from large parts of the succession from the Middle Triassic to the Lower Cretaceous in Barents Sea North. These have been used to correlate with Mesozoic deposits in other parts of the Arctic, and have contributed to increased understanding of regional geological development. Accurate dating of the cores provides significantly more control for dating the various seismic reflectors than before.

Table 1. Overview of more recent seismic surveying in the area.

Shallow drilling is used to acquire data on the sedimentary strata. Measuring five to seven centimetres in diameter, cores provide information on rock type and sedimentary structures. They can also provide a basis for indicating the potential of the strata to work as source, reservoir or cap rocks. The cores provide a good basis for regional correlation and increased understanding of geological developments. The length of this type of well is limited to 200 metres beneath the seabed. 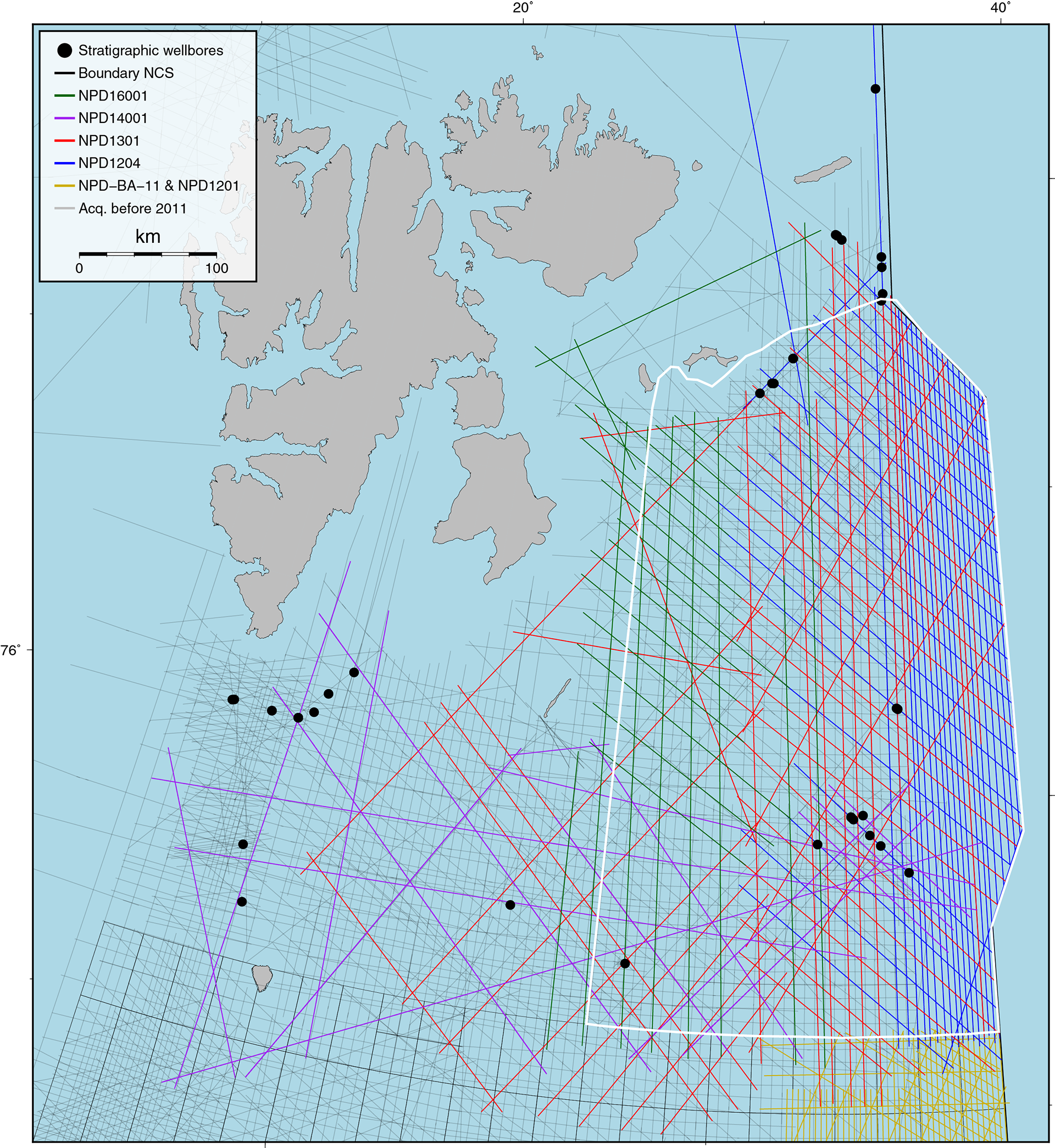 Shallow boreholes are defined in Section 2 of the Resource Management Regulations: Holes drilled in order to acquire information on the properties of the rock and/or to conduct geotechnical surveysto determine the location of facilities, and which are not drilled to prove or delimit a petroleum deposit or to produce or inject petroleum, water or other medium.

In reality, the definition includes two types of boreholes that are regulated by different provisions: