The most important measure for securing future oil and gas output is the drilling of new production wells.

The number of such wells has been maintained at a high level despite the marked fall in oil prices during 2014. Drilling and well costs have gone down. Accounting for a large share of overall spending, the expense of drilling is an important area to concentrate on

A large number of wells are drilled in the start-up phase on big fields in order to reach plateau production. This is often followed by a drilling pause until spare production capacity again becomes available. It will then be relevant to drill more wells, both on the field itself and in surrounding discoveries and prospects. Additional production wells are often drilled in the form of campaigns to benefit mobilisation and experience transfer along the way. As the field ages, finding profitable new drilling targets becomes an increasing challenge.

Many of the discoveries in the development portfolio depend on a tie-back to existing infrastructure to become commercial. This type of smaller project involves a different pattern to development then the big fields with their own drilling facilities. The tie-back fields production wells are normally drilled in the start-up phase, wells are more seldom added later.

The figure below shows that production wells are constantly being drilled on fields which have been on stream for a number of years. This activity appears to have increased over the past four years after a period of rather lower drilling. The biggest contribution to the growth comes from large old fields such as Troll, Ekofisk, Statfjord and Oseberg 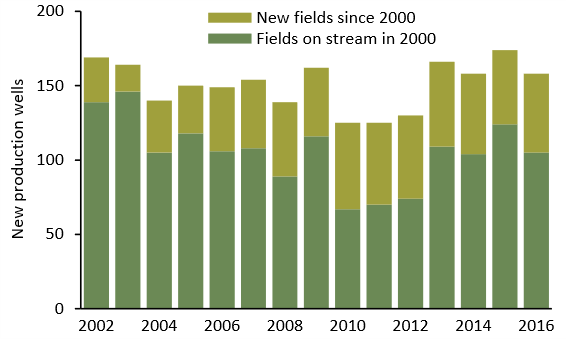 The number of new production wells has risen over the past four years.

The great majority of current wells are drilled by mobile units. This is a natural development, since most new fields are being brought on stream without a fixed drilling rig.

The marked decline in drilling by fixed rigs from 2009 to 2010 reflects reduced activity with such facilities on several large fields, such as Statfjord, Gullfaks, Ekofisk and Valhall 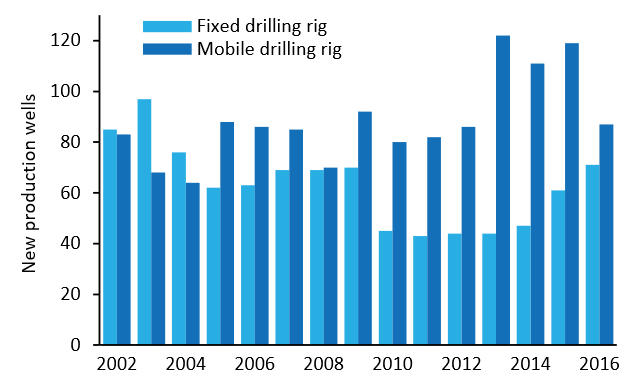 Most new fields are developed without a fixed drilling rig.

Developments in drilling and well technology

Drilling on many of the large old fields set to continue producing for many years can be challenging because substantial pressure differences are often found in the reservoir. At the same time, a great need still exists for new wells to optimise recovery. Adopting and further developing technology which can make it easier to drill in such conditions is therefore important.

Resources in tight reservoirs are difficult to recover commercially with traditional wells and completion solutions. Solutions which can increase the area drained by the production wells are among the requirements for producing such reservoirs.

It is important that experience with technologies already in use on some fields – such as advanced wells and managed pressure drilling and cementing – is shared and made available so that these solutions can be adopted more widely. That also applies to drilling technologies at the testing stage, such as new methods for drilling in shallow reservoirs and tight reservoirs.

Wells account for a large part of development spending on oil and gas fields. Drilling costs rose in 2002-12, with wells drilled by mobile units up from about NOK 200 million each to roughly NOK 700 million over this period. The most important reason for this growth was the increase in prices for goods and services required to drill a well. Costs have been falling since 2013, and were roughly at the 2010 level by 2016. Wells drilled from fixed rigs were also significantly more expensive in 2010-14.

Development in average drilling costs for production wells drilled by fixed and mobile rigs, 2000-16 (2016 figure is a forecast).

Most production wells are drilled by mobile units, where the most important cost elements are rig hire (45 per cent) and various types of well service (30 per cent). Changes in market conditions, rig rates, service costs and product prices could therefore have considerable influence on company criteria for drilling a well.

While the number of new production wells rose from 2012-16, costs per well declined. A rise in drilling efficiency could be one reason for this trend, but a number of other factors may have contributed.

The industry has pointed to the introduction of new processes to boost operational efficiency and greater attention paid to reducing unproductive time. Standardisation and optimising logistics are also important for faster drilling execution.

Selecting well targets plays a key role in efficient drilling. It can pay to pick easy objectives – in other words, relatively short wells with a simple geometry. Greater drilling efficiency is positive, but continuing to prioritise more challenging targets which could contain substantial resources ­– perhaps with a critical window of opportunity – will also be important

More information: see pages 13-23 in the article from Statistics Norway on Borekostnadene på sokkelen: Knask eller knep? (in Norwegian only) for a detailed review of drilling cost developments over time.

FMC Technologies won the NPD’s prize for improved oil recovery (IOR) in 2009. This award recognised the well control system developed by the company together with Statoil for safe and managed pressure drilling of sidetracks through existing subsea wells. 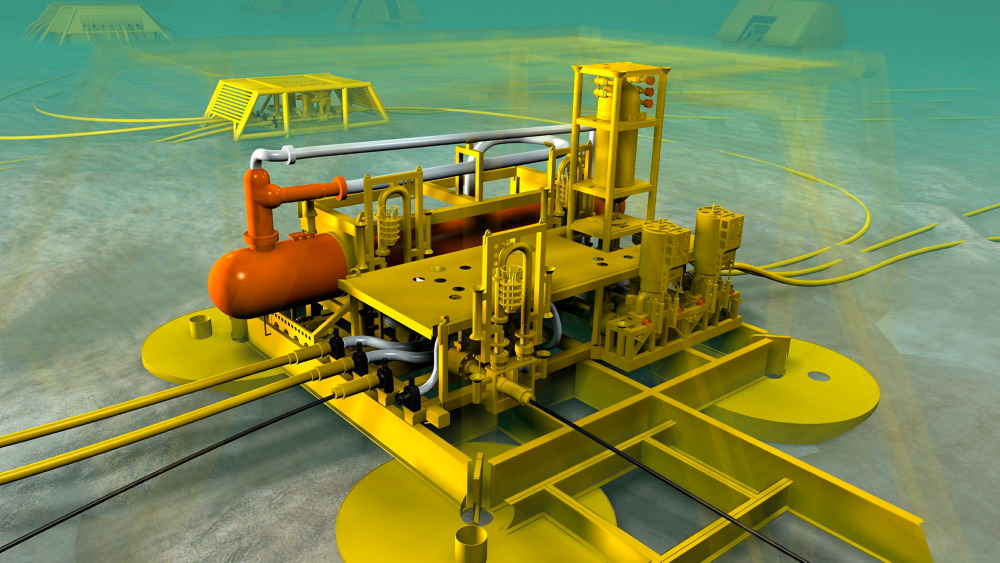