Players on the NCS

Activity on the NCS was dominated by large companies until 2000. Since then, different measures have opened the doors to various types of players and have greatly increased their number. A player picture which reflects the challenges facing the industry is positive in helping to realise the potential for resources and value on the Norwegian continental shelf (NCS).

Many of the new players are seeking other kinds of business opportunities than the big international oil companies – through exploration for smaller deposits in more challenging areas, for example. Players with different perspectives strengthen preconditions for value creation in both mature and less explored areas of the NCS.

The biggest changes in the player picture occurred in 2002-07, when the number involved almost doubled. Participation has been more stable over the past decade. Nevertheless, market conditions appear to have influenced developments. High oil prices and considerable activity steadily attracted new companies in 2010-13. This increase has reversed to some extent in recent years.

As in earlier periods with big price falls, the present downturn appears to have resulted in some company consolidation. While 55 licensees held interest in active production licences in 2013, that number was down to 46 by 31 December 2016. With the exception of large Norwegian companies, this decline has affected all company categories during the period.

As in earlier periods with big price falls, the present downturn appears to have resulted in some company consolidation. While 55 licensees held interest in active production licences in 2013, that number was down to 46 by 31 December 2016. With the exception of large Norwegian companies, this decline has affected all company categories during the period.

The classification of company types is presented below, with operators for producing fields in boldface. Allocation to the various categories is based on a combination of size, nationality and phase (strategy). Size is defined by the enterprise’s market value on the stock exchange. The transfer of companies between different categories has been preserved historically, since they mainly change type as a result of mergers.

Operator companies for fields on stream

Substantial growth has also taken place with companies operating fields on stream. This increase occurred primarily in 2010-13. Several of the companies became production operators by developing discoveries they operated, as when Eni took Marulk through to start-up in 2012. Others acquired operator status by farming into fields on stream. Examples include Wintershall, which took over Statoil’s operatorship of Brage in 2013, and Faroe Petroleum through its acquisition of the Trym and Oselvar operatorships in 2016. Most of the rise in the number of operators reflected an increase in medium-sized and European gas/power Companies.

After a period when a number of new production operators emerged, the picture has been more stable in recent years.

After a period of substantial growth, the overall trend for the composition of production operators has been one of limited change over the past couple of years. A slight reduction in the number of operators for fields on stream nevertheless occurred in 2016, which supports the impression that some consolidation of companies in the production phase is under way. Examples were seen when Shell acquired BG and when Det Norske and BP merged to form Aker BP. Despite the relative stability in the number of production operators, constant revisions are taking place in the composition of company types. The purchase of ExxonMobil’s operated interests by Point Resources provides a recent example of a player picture in constant change. This transaction is currently under consideration by the government

Although a number of new players have entered the NCS, the big companies still account for the bulk of output. However, production is breaking down ever more evenly between the various company categories. The share of medium-sized companies, in particularly, has increased sharply over the past decade.

A clear trend has existed towards a growing variety of companies over time (distribution of annual production, based on company holdings in operated and partner-operated production licences).

Players in the exploration phase

The growth in new companies has been particularly marked in the exploration phase. This has yielded a high level of activity, increased competition and a greater diversity of ideas. The 2016 resource report for exploration shows that the new players have generated activity, competition and different ideas, and thereby contributed to new discoveries and substantial value for society. This development emerges clearly when resources in the discovery portfolio are broken down by the various company categories:

Medium-sized companies hold about a third of the resources in today’s discovery portfolio. In light of that development, a further increase in their share of output is likely as more discoveries are matured to Production.

The overview below is based on company interests in operated and partner-operated production licences. 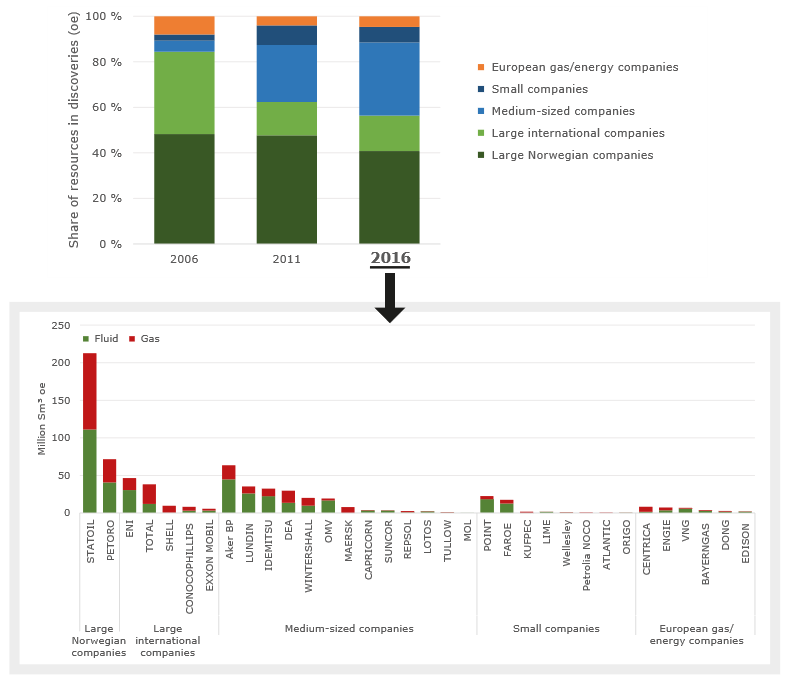 Resources in the discovery portfolio have become ever more evenly divided between the various company categories over the past decade.

In addition to Statoil and Petoro, licensees with the biggest interests in resources in discoveries include Aker BP, Eni, Total and Lundin

As new players account for a steadily growing share of activity on the NCS, it is important that they show the ability and willingness to develop projects which secure long-term value creation. Many cases exist of new players who succeed in maturing development projects to production.

Maria, Oda and Dvalin are examples which demonstrate that new field operators are important contributors to value creation on the NCS.

Players learn from each other

As further companies enter the NCS, experience transfer between the players becomes steadily more important. New players can learn from companies with a long history in Norway’s petroleum sector, while many are also able to contribute valuable experience and expertise from other oil and gas provinces.

The NPD’s role as a driving force and supervisor establishes parameters for contributing to experience transfer between players. Close follow-up provides insights which can also be utilised in the dialogue with others.