Large oil resources on the Norwegian continental shelf (NCS) cannot be produced with current plans and technology. About half of these call for enhanced oil recovery (EOR) techniques. Testing, qualifying and applying new improved recovery methods within a reasonable time is important if substantial oil volumes on the NCS are not to be lost.

Water and/or gas injection is used on most Norwegian oil fields to improve recovery. This maintains pressure and sweeps the reservoirs, but nevertheless leaves a sizable quantity of oil behind. That applies to both mobile and immobile oil. 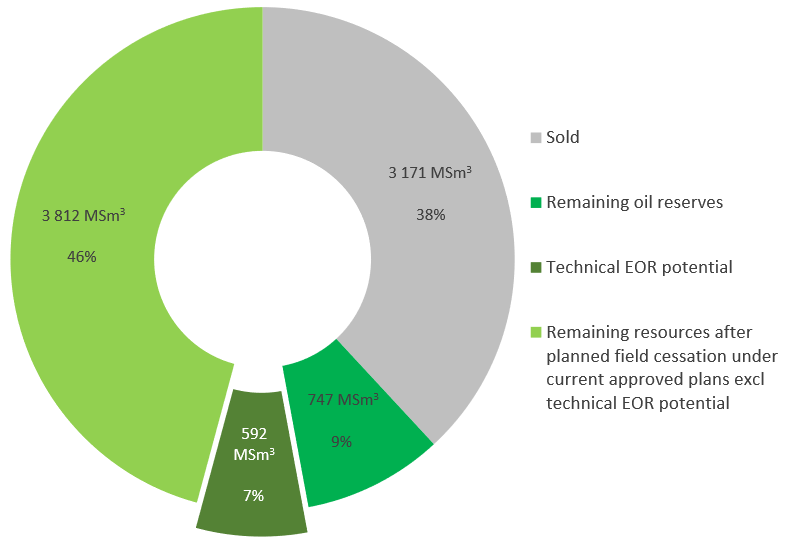 In cooperation with C Smalley and A Muggeridge from Imperial College in London, the NPD has conducted a screening study which aimed in part to provide an estimate for the technical recovery potential offered by various EOR Methods.

This work covered 27 of the largest fields on the NCS, which contain about two billion scm of immobile oil. The results show an overall technical EOR potential of 320-860 million scm for both mobile and immobile oil.

It is important to emphasise that this is a technical EOR potential. No account has been taken of financial, environmental and operational conditions. Even if only about 10 per cent of the technical potential, for example, yields profitable production, it would represent almost NOK 150 billion in gross sales revenues at an oil price of USD 50 per barrel and an exchange rate of NOK 8 to the USD.Resource overview for the 27 fields included in the study. 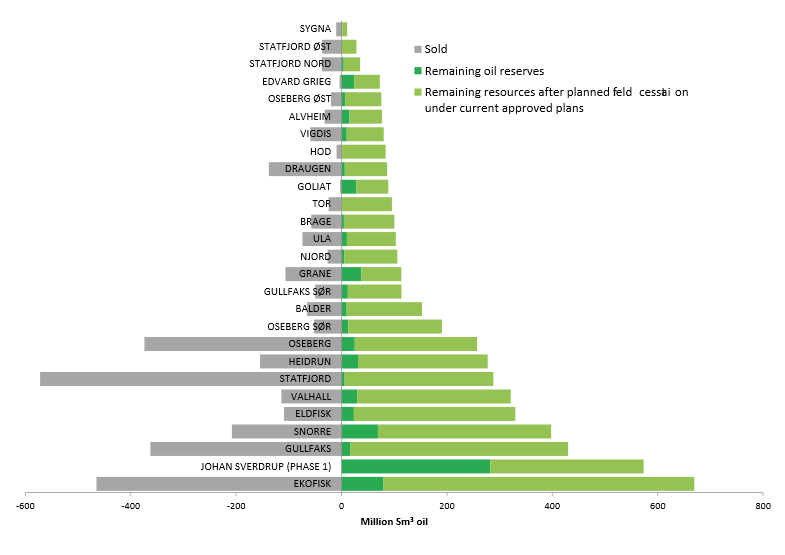 Resource overview for the 27 fields included in the study.

Areas which stand out

A geographical analysis of the technical EOR potential has been carried out to identify defined areas where specific methods could be applied. This work shows clear geographical trends for applying the same EOR solution. 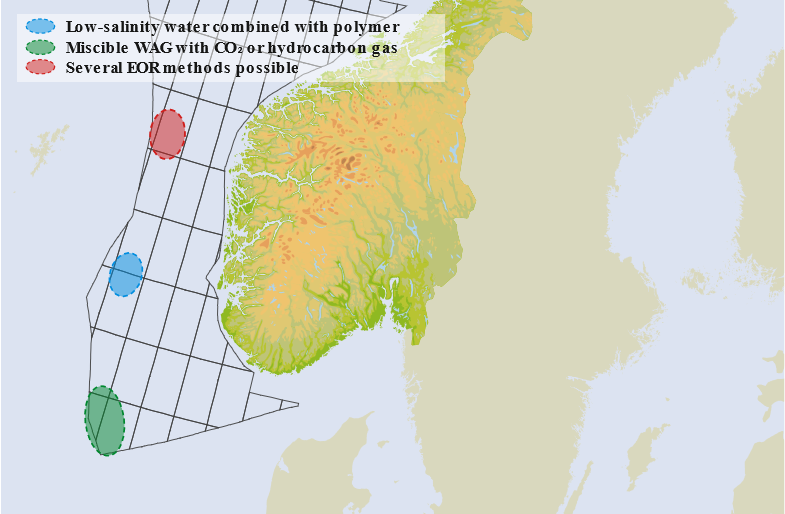 Miscible water alternating gas (WAG) injection with CO2 or hydrocarbon gas has the largest potential on the chalk fields at the southern part of Norway’s North Sea sector.

Several different methods have a large potential in the Tampen area of the northern North Sea. Miscible WAG injection would be best for some, while others are likely to benefit most from water-based EOR solutions.

Collaborating over EOR projects across production licences could be appropriate – with joint supply of injectant (chemicals or gas), for example, covering several fields in the same area.

Offshore EOR projects generally require substantial investment, and extra oil recovery could be achieved later than with conventional methods. Pilots are also required to clarify uncertainties associated with the recovery potential and technical feasibility. In most cases, pilot tests are essential for large-scale implementation of new technology.

An EOR project could comprise pilot and evaluation phases before possible full-scale adoption. From a company perspective, the cost of a pilot must often be incorporated in the financial assessment of the EOR project. The same applies to probability calculations for a successful pilot and possible successful field implementation.

Total costs and their breakdown between investment and operation for the various EOR methods depend on several factors.

It can generally be assumed that EOR methods such as CO2 and low-salinity injection are the most capital-intensive, while operating costs form a larger part of the overall bill for injecting polymers, surfactants, gels and alkalines.

An example of a financially sound EOR project is the low-salinity scheme on the BP-operated Clair Ridge field on the UK continental shelf. Due to come on stream in 2018, it is estimated to have a breakeven oil price of USD 3 per barrel.

The government considers pilots to play an important role in data acquisition. Their purpose is to narrow the uncertainty range for the potential and to verify feasibility.

Several EOR methods have been tested and applied on a large scale on land, with a positive outcome. But these solutions have hardly been tested where the Norwegian continental shelf (NCS) and the offshore sector in general are concerned. Factors which make their implementation more demanding offshore include wide well spacing, weight, space and power constraints on existing platforms, and environmental restrictions on discharges to the sea.

As a result, great uncertainty prevails about the recovery potential and whether it is technically and operationally possible to verify feasibility, reduce risk/uncertainty, provide knowledge of possible environmental challenges, and demonstrate an increased recovery potential from adopting the various EOR methods. This is necessary for such technologies to be adopted for improved recovery from the NCS.

A polymer test was conducted on Heidrun in the autumn of 2016. Biopolymer was injected and produced back from the same well. The purpose of the test was to verify the properties of biopolymer, which had previously been measured in the laboratory. Good injectivity was verified, with no biodegrading of the polymer recorded. The conclusion was that the test had been successful, including in operational terms.

Polymer flooding on Johan Sverdrup could improve recovery. In connection with approval of the plan for development and operation (PDO), the government required a two-well polymer pilot to be implemented no later than two years after the field comes on stream. Its purpose will be to confirm a possible improved recovery potential on Johan Sverdrup and to gain experience with the use of polymers on NCS Fields.

SEE ALSO: Government instruments for following up the petroleum industry

A successful pilot on Johan Sverdrup would form a better basis for assessing whether to apply the method on a large scale on the field. Results from the pilot will also provide valuable information on opportunities for using polymers on other NCS fields

Both the companies and the NPD have conducted a number of studies to see how recovery from producing fields on the NCS could be improved by injecting CO2 as an EOR method. This work has shown positive results.