Resources for the future: Seabed minerals and gas hydrates

The Norwegian continental shelf – more than oil and gas

The increased attention being paid to producing energy with a low carbon footprint is expected to boost demand for gas and renewables. Developments with renewable energy sources and battery technology call for access to substantial quantities of minerals with rare-earth elements (REEs). Mapping has shown that such resources could also be present on Norwegian territory. The NPD is due to launch its own investigations in the summer of 2018 to improve understanding of the resource potential on the Norwegian continental shelf (NCS).

Energy production with a low carbon footprint could mean rising demand for gas and minerals with REEs. Renewable energy output and the associated need for battery storage is expected to grow (fact box 8.1). It has long been known that big deposits of minerals with REEs could exist in the deep oceans.

On 1 April 2017, the Ministry of Petroleum and Energy (MPE) was given administrative responsibility related to prospecting for and recovering mineral deposits on the NCS. Administrative authority for seabed minerals has been delegated to the NPD. That includes mapping resources, compiling resource accounts and following up the industry’s activities, as well as providing technical and economic advice to the MPE. Little exploration for mineral deposits has so far taken place in Norwegian sea areas, and the applicable legislation is not designed for such activity. The MPE is therefore working on a new Act covering mineral recovery from the NCS.

Where the NCS is concerned, seabed minerals are known to exist in the deep parts of the Norwegian Sea (figure 8.3). The University of Bergen (UiB) made the first discoveries of “black smokers” there more than a decade ago (fact box 8.2). Drawing in part on the NPD’s large multibeam bathymetric data set from these waters, the UiB identified a number of sulphide deposits (both smokers and mounds) along the volcanic Mohn Ridge between Jan Mayen and Bjørnøya and further north. Samples have since been taken from a number of sulphide deposits and crusts while mapping the Norwegian Sea in a multi-year research partnership between the UiB and the NPD. 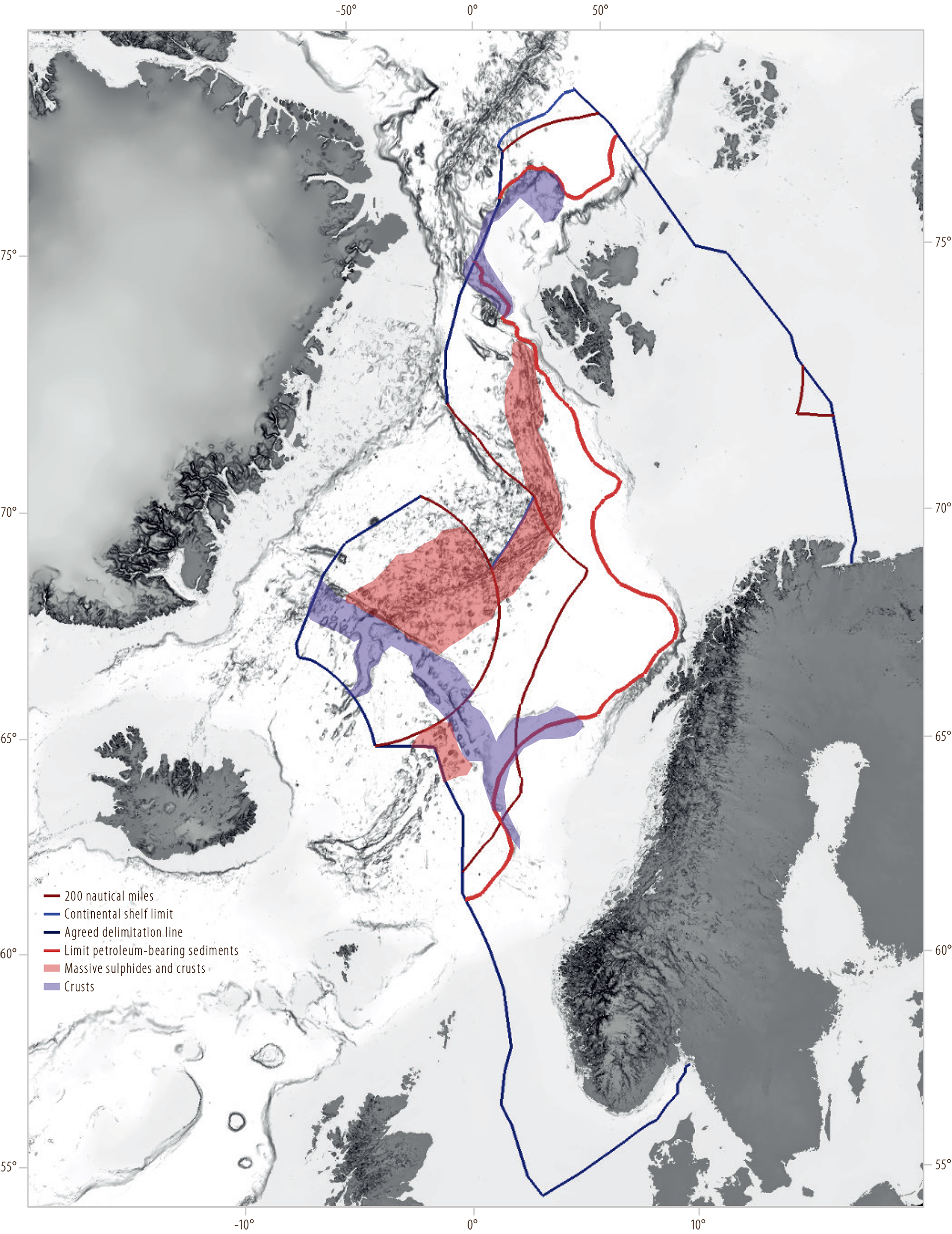 Figure 8.3
Areas of the NCS with possible deposits of seabed minerals.

In addition to the Norwegian Sea deposits, manganese crusts could be present around the Yermak Plateau in the Arctic Ocean north of Svalbard.

The NPD has carried out chemical analyses of thick manganese crusts on the steep slopes of the Jan Mayen Ridge and the Vøring Spur. These have revealed that manganese crusts in the Norwegian Sea fall into two groups in terms of their lanthanide content. One has twice the amount found in Pacific and other Atlantic sources, the other has less. Both groups contain substantially more lithium (20-80 times as much) and scandium (four-seven times) than similar crusts in the Pacific and the rest of the Atlantic. These two metals are both expected to be in demand.

A data acquisition expedition focused on sulphides was conducted during 2017 by the NPD in collaboration with the UiB on the Mohn Ridge. Plans for 2018 include a large survey concentrated on massive sulphide deposits from inactive hydrothermal systems and a separate mission focusing on iron-manganese crusts.

Natural-gas hydrates could become a future energy source. They are present in large quantities immediately beneath the seabed in some parts of the Norwegian and Barents Seas. Their extent is likely to be greatest in the Barents Sea, where deposits appear to extend over large areas.

Water depths on the Barents Sea’s continental shelf go down to 500 metres. Seabed temperatures can be 0°C or lower. That means the thickness of the GHSZ may be anything from a few tens of metres to 400 metres, depending on gas composition and geothermal gradient (figure 8.5, based on Chand et al, 2012).17 18

Figure 8.5 presents the thickness of the GHSZ. Its thickest extent in the south-western Barents Sea coincides with the deepest part of the continental shelf there. In this area, gas hydrates could act as a cap over hydrocarbons in shallow reservoirs. They have been found on the Vestnes Ridge west of Spitsbergen, and good indications of methane hydrates exist in the Bjørnøya Basin.

The NPD is involved in a number of projects related to research on gas hydrates, in collaboration with the Centre for Arctic Gas Hydrate, Environment and Climate (Cage) at the University of Tromsø – the Arctic University of Norway (UiT). Attention in recent years has concentrated on understanding how gas hydrates affect petroleum systems and pressure.

No commercial method has so far been found for producing gas hydrates, but research into such solutions is being pursued internationally. 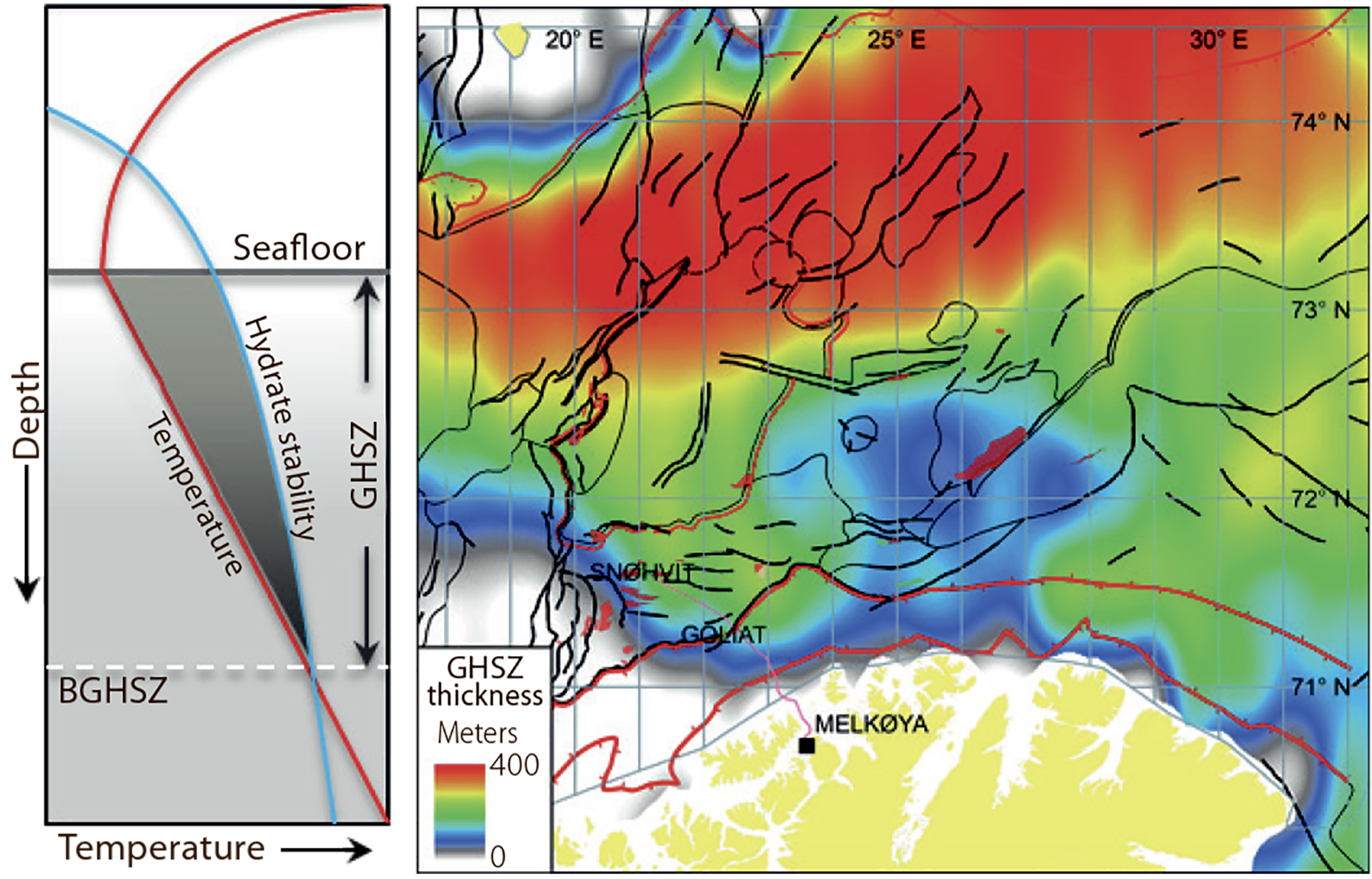 Figure 8.5
Thickness of the gas hydrate stability zone in the Barents Sea.
Based on Chand et al, 2012