Emissions, discharges and the environment

Concern for the natural environment has always been an integral part of ­managing Norway’s oil and gas resources, and is taken into account in every phase – from exploration, development and operation to field cessation. The industry is subject to strict regulations covering both emissions to the air and discharges to the sea.

The main instruments for restricting greenhouse gas (GHG) emissions are economic – emission trading and the CO₂ tax. This gives companies a permanent self-interest in implementing reduction measures. Norway’s reporting to the UN framework convention on climate change estimates that these two instruments contributed to measures which will cut CO₂ emissions from the NCS by almost seven million tonnes in 2020.

CO₂ emissions from the petroleum sector have been covered by the EU emission trading system (ETS) for GHGs since 2008. The oil companies on the NCS are thereby helping to reduce total emissions within the ETS by 43 per cent from 2005 to 2030. In addition, they pay a high CO₂ tax. Introduced in 1991, this has contributed in combination with the ETS to the implementation of many measures on facilities and at land plants.

Substantial resources are devoted to such measures as more efficient gas turbines, enhanced energy efficiency, power-from-shore solutions and carbon storage. This has helped to ensure that Norwegian emissions per unit produced are significantly lower than the average for petroleum-producing countries.

Scientific assessments indicate that petroleum operations have no significant impact on the environmental status of Norway’s sea areas. Since operations began on the NCS more than 50 years ago, no acute oil spills have led to beaching or measureable effects on the marine environment. Because major acute spills could nevertheless have an impact, avoiding them is important. Work on zero discharges aims to ensure that no harmful substances are released to the sea on the NCS.

To achieve this, discharges are regulated by the government. Releasing produced water containing more than 30 parts per million (ppm) of oil is prohibited. However, most companies on the NCS operate with even more stringent treatment standards, and several inject produced water back into the sub-surface.

The NPD prepares annual emission/discharge forecasts covering all activity on the NCS subject to the petroleum tax regime. Predictions for emissions/discharges from future activities are based on decided plans, projects in the planning phase, expected exploration and potential development of undiscovered resources. 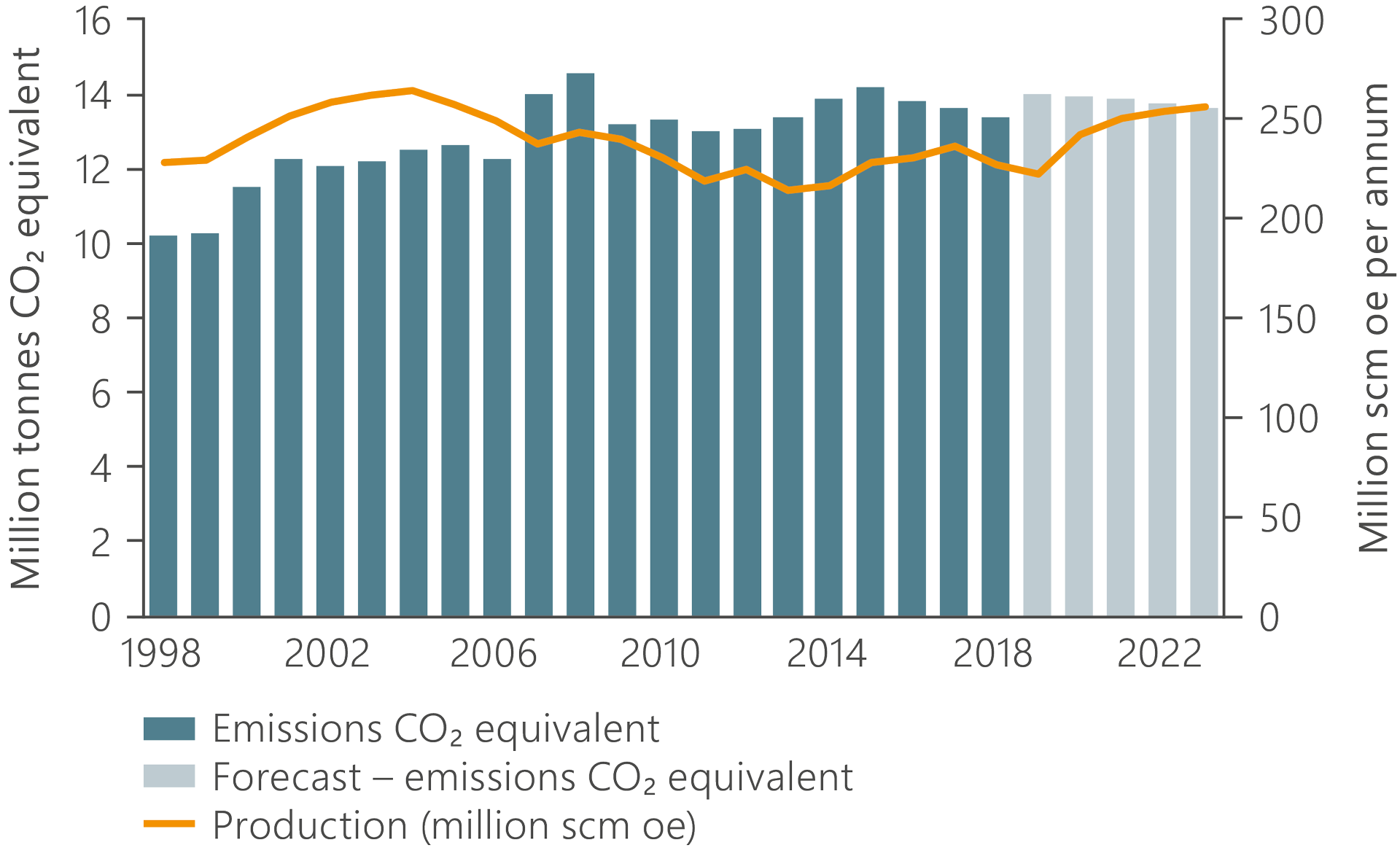 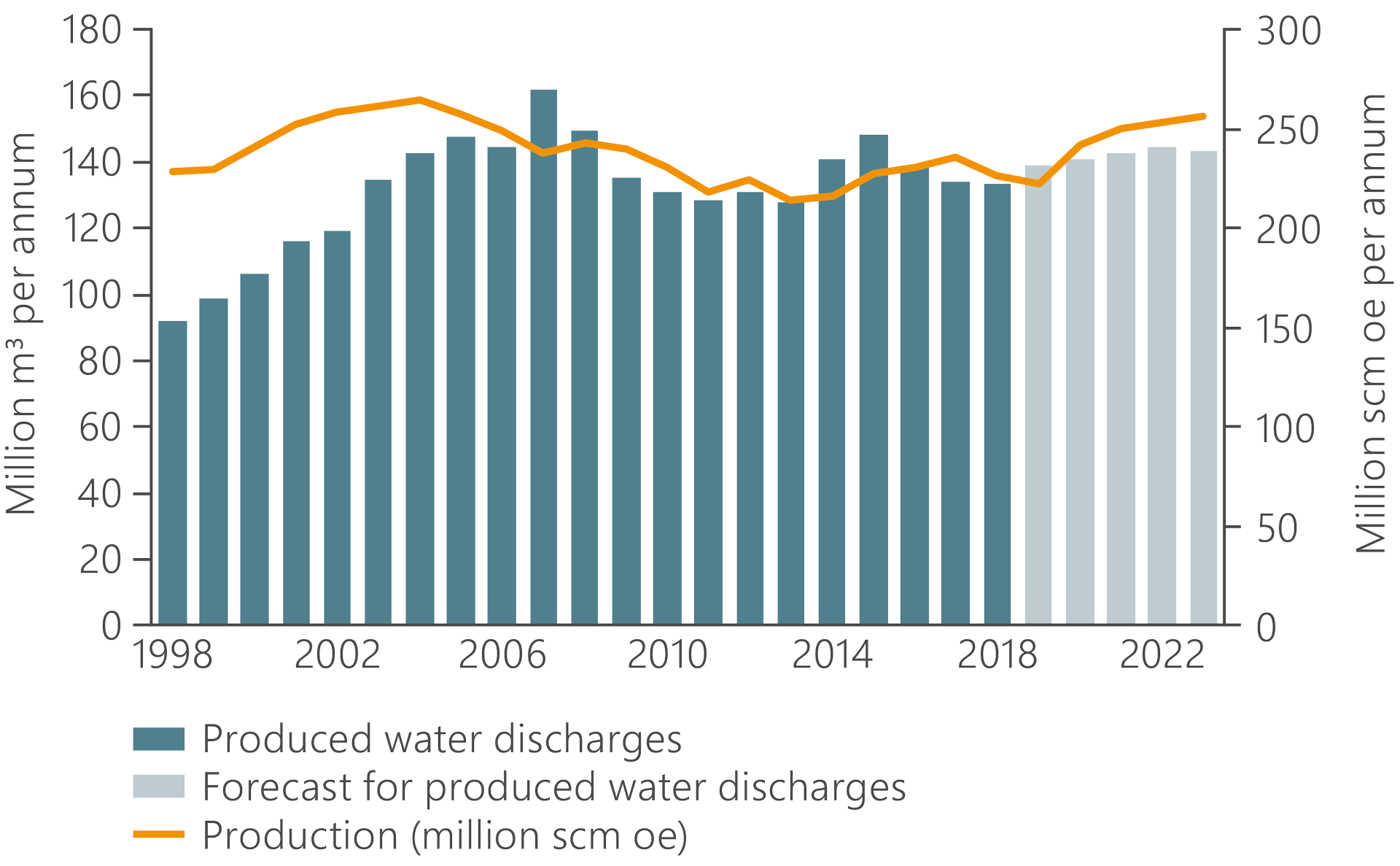 Discharges to the sea primarily comprise produced water, drill cuttings, and chemical and cement residues from drilling operations. Mitigating measures cover pre-discharge treatment, injection back to the reservoir for pressure support, deposition in the sub-surface or shipment to land for treatment as hazardous waste.

Substantial research has been pursued over the past 10-15 years to establish the effect of discharging produced water and the components found in it. This work has shown that the components can harm marine organisms, but generally only at concentrations found close to the discharge point.

On many fields, produced water is injected back into the reservoir as part of the pressure maintenance needed to keep oil production going. Compared with seawater or desalinated water, however, injecting produced water may reduce permeability and complicate reservoir drainage.

The goal of the government and the companies on the NCS is no harmful discharges to the sea. Injection and pre-discharge treatment have substantially reduced the amount of oil released. Billions of kroner have been invested on some fields to treat or inject produced water.

Just under 14 million tonnes of CO₂ equivalent were emitted from the NCS in 2018, about a quarter of Norway’s total emissions. Most of the amount released from the NCS derives from gas turbines used to either generate electricity or drive pumps and compressors on the platforms. The biggest potential for emission reduction is therefore offered by efficient turbine operation or introducing alternative power sources. Technologies also exist which can help to cut emissions from other operational areas. 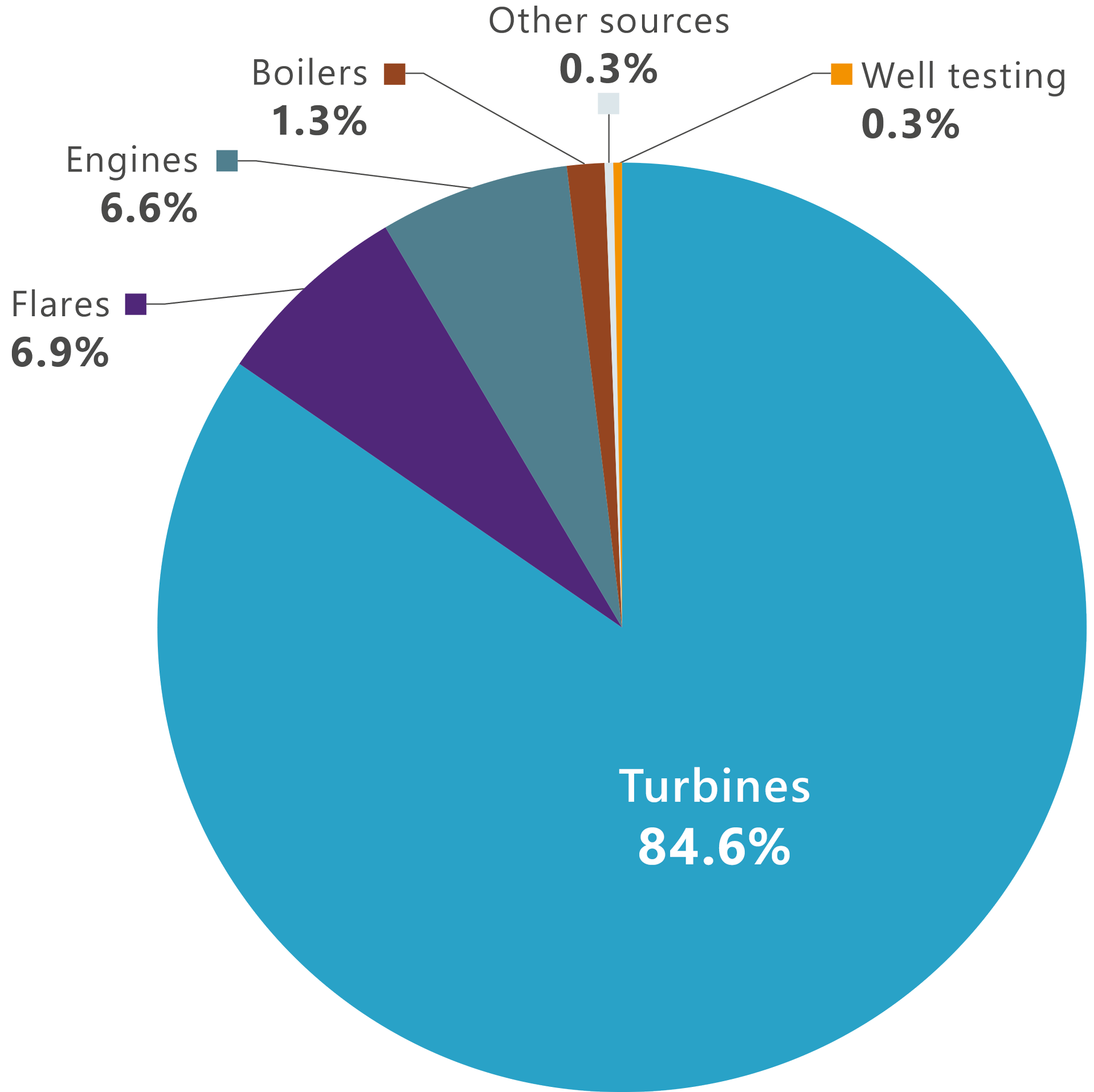 The NPD has identified several types of measures for reducing CO₂ released from petroleum production facilities. These fall into the following categories:

Each field is unique. Both the cost of and the potential for emission cuts must always be based on the design, size, production level and remaining producing life of each facility, and be assessed against ETS prices and tax rates.

Energy efficiency can also be enhanced through reducing the time taken by energy-intensive activities. Drilling and well operations are particularly relevant. The main purpose of shortening execution time is to cut costs. This also reduces energy consumption and CO₂ emissions.

Flaring is only permitted for safety reasons. The flare system forms part of a facility’s safety system, and must only be used in connection with safe start-up, shutdown and pressure blowdown. Flaring solely for producing oil has been prohibited since production began on the NCS. Norway has been a pioneer in this respect. It has contributed to lower CO₂ emissions and better utilisation of gas resources from the fields.

Reduced flaring must always be viewed in relation to the safety system on a facility. It is expected to be attainable through various technical and operational measures, including improved production regularity, better procedures and flaring strategies, personnel training and reduced blowdown.

Operators have been required since 1996 to assess power supplied from shore in all new developments and for major conversions to existing fields. In most cases, powering an offshore facility in this way will substantially reduce CO₂ emissions from production. Since the NCS is also subject to the EU ETS, such cuts will probably be offset to a great extent by increased emissions in other parts of Europe.

Power from shore means that gas which would otherwise fuel turbines is freed up. Several fields and facilities, such as Valhall, Troll A and Gjøa, have been powered from shore for many years with good results.

Figure 4.4 presents the share of total NCS production powered from shore now or due to be so under current plans. More than 40 per cent of Norwegian output is expected to utilise power from shore in 2023.

The Utsira High fields account for much of the production increase covered by power from shore. Although Edvard Grieg, Ivar Aasen and Gina Krogh run today on gas turbines, they are due to switch to supplies from land when the second stage of Johan Sverdrup comes on stream in 2022. This means the total quantity of oil and gas produced with power from shore is rising, and emissions per unit produced from the NCS are declining.

At the same time, the effect of the area solution for power from shore on the Utsira High does not emerge clearly from the emission forecasts in figure 4.1. This is because the Utsira High fields converting from gas turbines have relatively low emissions in an NCS perspective, and because Johan Sverdrup will be powered from shore when it comes on stream.

Power from shore often involves such substantial investment that it becomes uneconomic. This can apply both to new facilities and, not least, to the modification of existing installations. Electricity supplies from the onshore grid must also be adequate.

The scope of modification work and the cost of converting a facility to power from shore depends on such factors as whether it is fixed or floating, and the amount of electricity required. Where most facilities are concerned, it is less demanding and expensive simply to replace turbines driving generators with power from shore than to convert completely to the latter. This electricity source is most appropriate for existing facilities in areas which can be supplied with alternating current – in other words, located relatively close to land.

Installing power from shore on new fields and facilities costs less than converting fields already in production to this form of electricity supply.

Where wind turbines able to supply electricity to oil and gas facilities are concerned, a distinction is made between fixed and floating installations. Fields on the NCS lie in areas of relatively deep water (70-1 000 metres), so turbines installed on floating units close to the facilities represent the most relevant option.

A challenge with wind turbines is that they cannot operate when conditions are too calm or excessively stormy. This means they cannot meet a facility’s power requirements on their own. Wind power is generally better suited as part of a larger grid with other generating units, so that local variations can be evened out.

Supplying oil and gas facilities with offshore wind power is very expensive using current technology. Equinor has now secured NOK 2.3 billion in support from Enova to build a floating wind farm which can deliver electricity to facilities on the NCS.

Hot exhaust fumes from gas turbines can be used to drive a turbine for power generation, exploiting thermal energy which would otherwise have been wasted. This represents a way of improving energy efficiency.

However, thermal power depends on heavy and bulky equipment, and finding sufficient spare space and weight capacity on existing facilities can be difficult. Such installations exist today on Oseberg, Eldfisk and Snorre.

New facilities can be tailored more easily to a heavy and bulky thermal power plant than to existing structures. As a rule, their turbines also have greater installed output. That makes it possible to specify a larger thermal power plant with a higher electricity output and an associated reduction in CO₂ emissions.

The cost of installing thermal power is substantial. Access to turbine exhaust heat is also restricted by the fact that a proportion of it is required by the process.

Based on input from ConocoPhillips: Reduced emissions in the Ekofisk area