The Norwegian Petroleum Directorate’s production forecast up to 2022 shows an increase from 2020, when Johan Sverdrup has come on stream. Total production of oil and gas in 2022 is estimated to be close to the record‐breaking year 2004. Gas will then account for about one‐half of the production.

In 2017, total sales of gas amounted to 124.2 billion Sm³ (122.0 billion Sm³ 40 megajoules of gas). This is a new Norwegian gas sales record. It is difficult to predict gas sales levels, even in the short term. Sales in 2017 ended 6.6 per cent higher than our estimates at the same time last year. This is due, in part, to consistently high demand for gas from Europe. Several fields in operation have increased the gas production. The forecast for short‐term gas sales (Figure 1-2) shows that a stable high level with a minor increase over the next five years is expected. 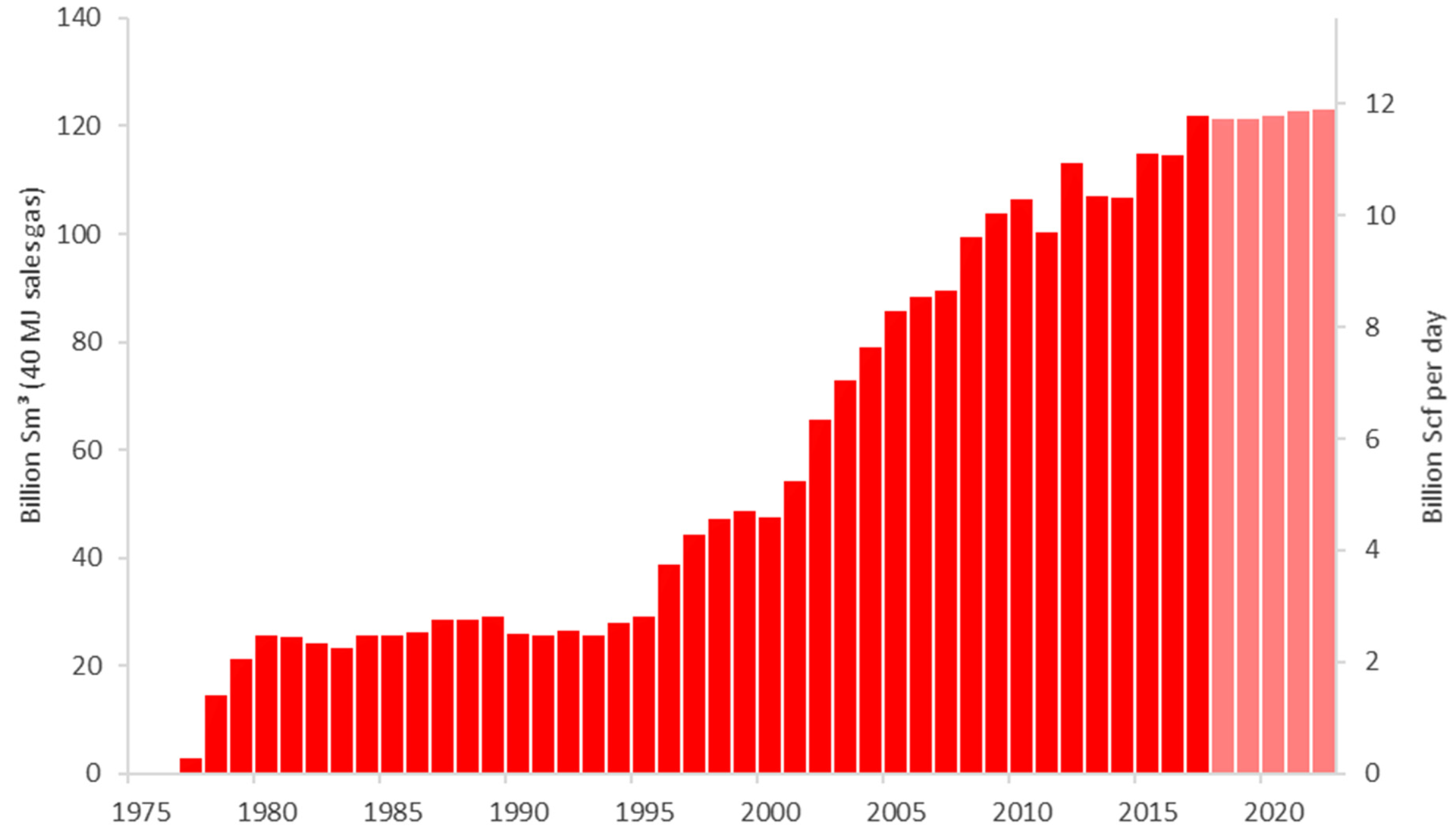 The Norwegian Petroleum Directorate’s forecast for 2017 did not predict a decline in production compared with the previous year. Most of the decline is the result of an unplanned maintenance shutdown on the Goliat field.

For 2018, the Norwegian Petroleum Directorate estimates that oil production will be reduced by an additional 2 per cent, to 90.2 million Sm³ (1.55 million barrels per day). The reduction in oil production is expected to continue towards 2020, while after this, Johan Sverdrup will contribute to a new upswing in production. Uncertainty in production forecasts is particularly linked to the drilling of new wells, start‐up of new fields, the ability of the reservoirs to deliver, and regularity on the fields in operation.

Production from approved developments accounts for 90 per cent of the volume expected in the five‐year period 2018‐2022 (Figure 1‐3). The remaining ten per cent is expected to come mainly from additional measures to improve recovery from the fields. Wells that have not yet been decided and optimisation of production strategies are the main contributors to this. In the last years of the period, production is also expected from discoveries where no development decision has yet been made. 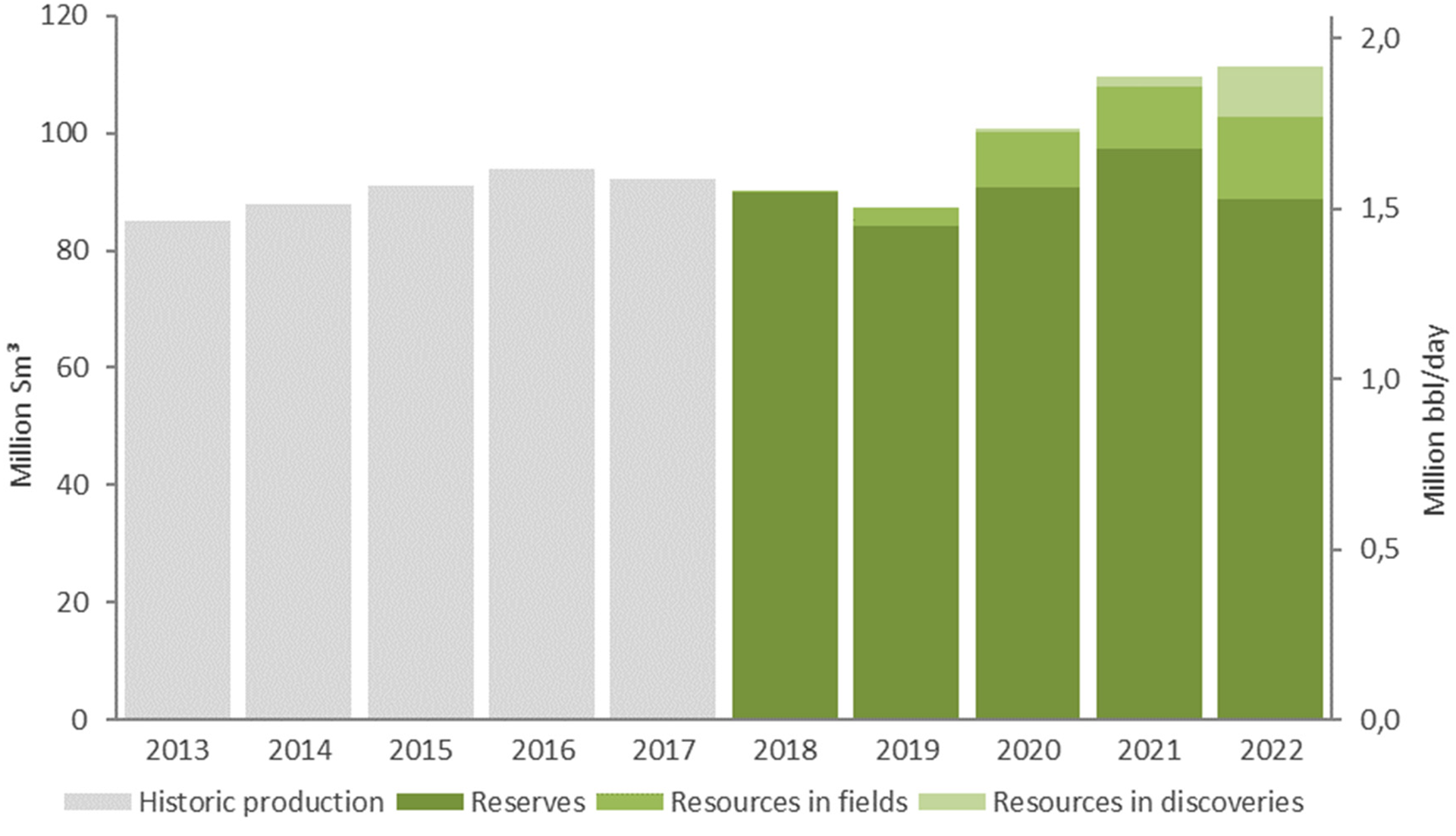 Production development in recent years shows that the fields are producing more than previously assumed. This is the result of efficiency measures, particularly within the drilling of wells and regularity on the facilities. More development wells and an assumption of higher gas sales have now been included in the forecast. Several development plans were submitted in late 2017. The Norwegian Petroleum Directorate expects this trend to continue with additional new projects in the time ahead, so that production will come on stream faster than previously thought.

Figure 1‐4 shows the latest production forecast compared with the forecast presented one year ago, in connection with The Shelf in 2016. This prognosis reveals relatively flat production development up to 2020. From that point in time, it is presumed that all projects currently under development will contribute to an increase in production. The production level is higher throughout the entire period, compared with the previous forecast. This is due, in part, to the fact that more new measures have been identified on the fields. This mainly relates to the inclusion of more wells in the forecasts.

The contribution from approved petroleum production will remain at a stable, high level for the next five‐year period. In the subsequent five years, the production level will rise during the first years of the period due to new measures on the fields. Later on, the contribution from discoveries without a current development decision will increase. Production from undiscovered resources will take on greater significance going towards 2030.

The production level in the years to come is uncertain. It will depend on which measures are implemented on the fields, which discoveries are approved for development, and when they come on stream. New discoveries during the period, their size and how and when they are developed will also have an impact on the production level. Given these assumptions, total production from the Norwegian shelf will reach a new peak in 2023. 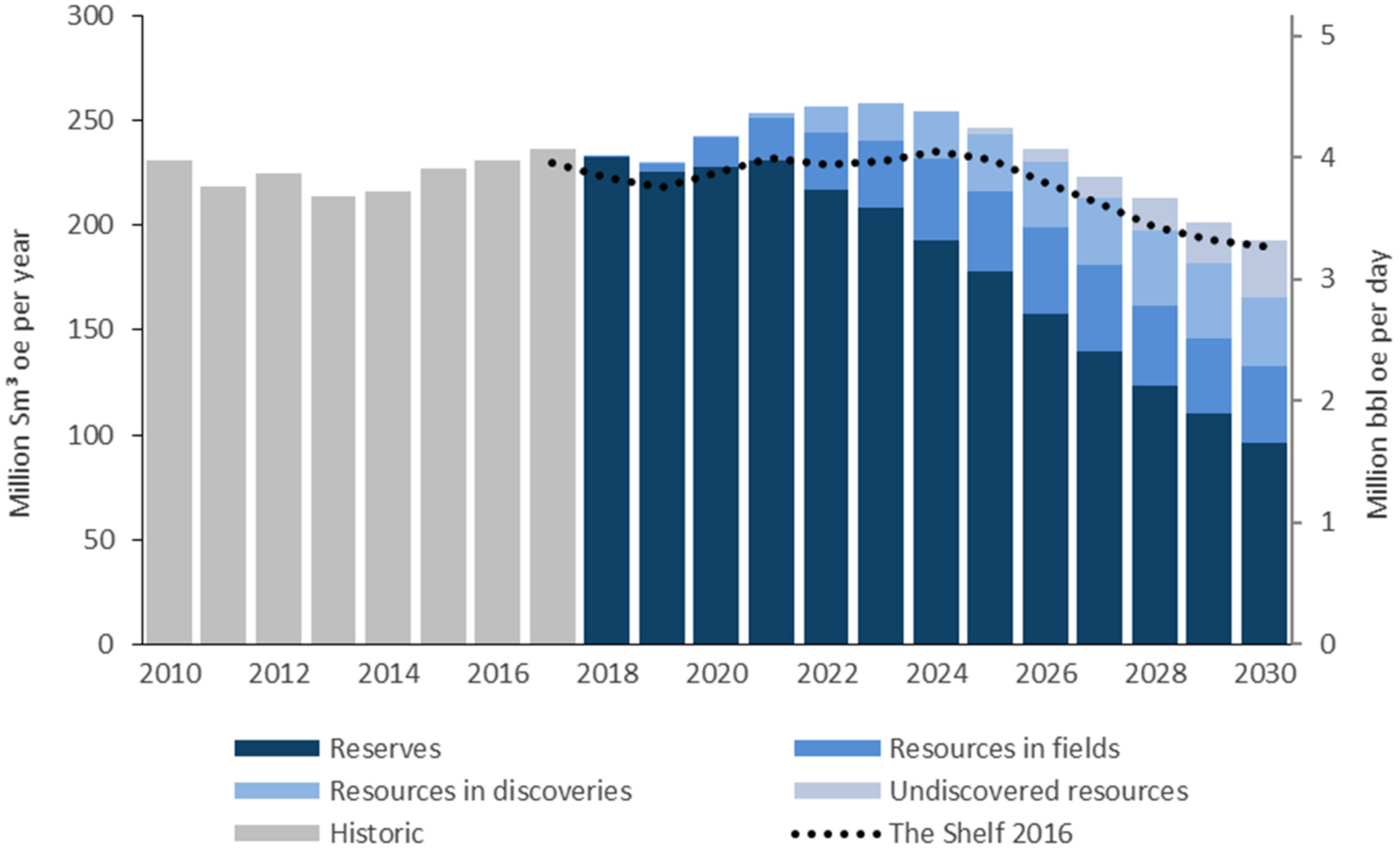