The petroleum industry has made a considerable effort to reduce its cost level, which has resulted in substantial savings. The cost level for field developments has declined and there has also been a substantial reduction in both operating and exploration costs.

A combination of many different measures has yielded benefits in the form of increased efficiency, simpler solutions and more use of standardised solutions. All of this contributes to improved profitability. It is important to continue work in this area.

The estimated investment level in 2018 is marginally higher than in 2017. Further growth in investments is expected from 2018 to 2019. As regards exploration activity, we are anticipating moderate growth over the next few years.

Resource growth from new discoveries has been low in recent years. If no new, major discoveries are made, this will result in reduced investment activity over the medium to long term. At the same time, it will be important to mature new projects on operating fields in order to counteract the declining activity level.

Since 2014, the industry has implemented multiple initiatives to reduce costs, following low profitability over time. The need to reduce costs was amplified by the declining oil price. Oil companies have worked alongside the supplier industry to put in a considerable effort. A broad spectrum of measures have been initiated in both the planning, implementation and operations phases. Individual measures with a relatively modest isolated impact, yield substantial reductions overall.

The decline in development costs is significant; for certain projects, the investments have been cut in half. The common denominator for the projects that are currently being approved, is solid value creation and break‐even prices of 30‐40 USD/bbl. The overall picture is that new development projects are robust at substantially lower prices than the current level.

Operating costs have also been reduced by about 30 per cent (Figure 2‐1) from 2013/2014. The reductions are mainly due to efficiency measures, streamlining and reduced supplier prices.

The NPD's forecasts presume a gradual growth in supplier prices as a consequence of the higher activity level. It is furthermore presumed that some postponed operations activities will have to be carried out. Costs are expected to rise somewhat as a result of this. At the same time, a considerable effort is being made to map and prepare new measures for additional improvements and cost reductions. 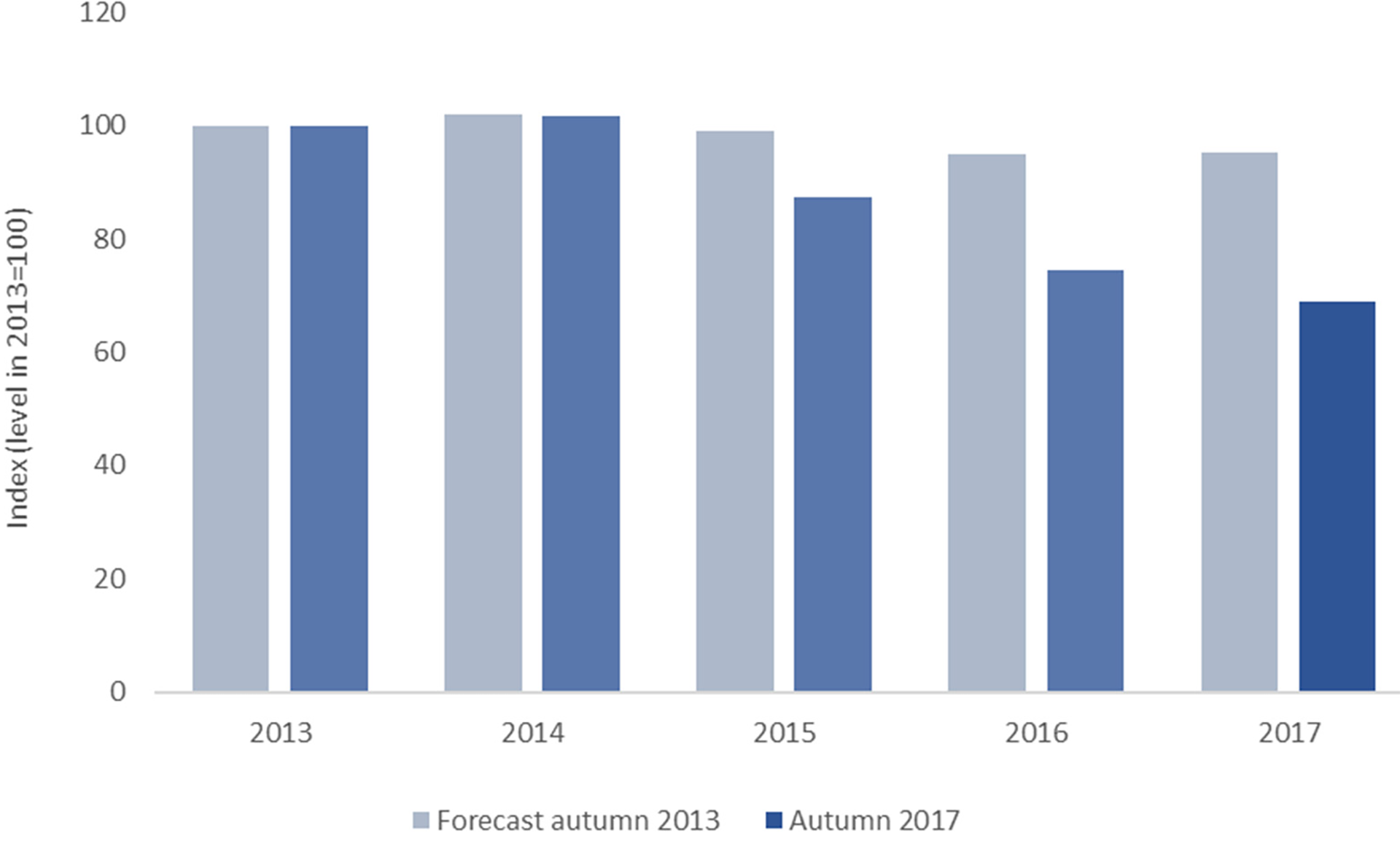 Investments have now levelled off. In 2018, we are expecting investments to total approx. NOK 122 billion, which is marginally higher than in 2017, (Figure 2‐2). Due in particular to the fact that a number of new development projects are scheduled to start in 2018, there is uncertainty with regard to the overall investment level. The forecast has taken into account that project progress may be somewhat slower during the first investment year than what the companies have presumed in their investment estimates. 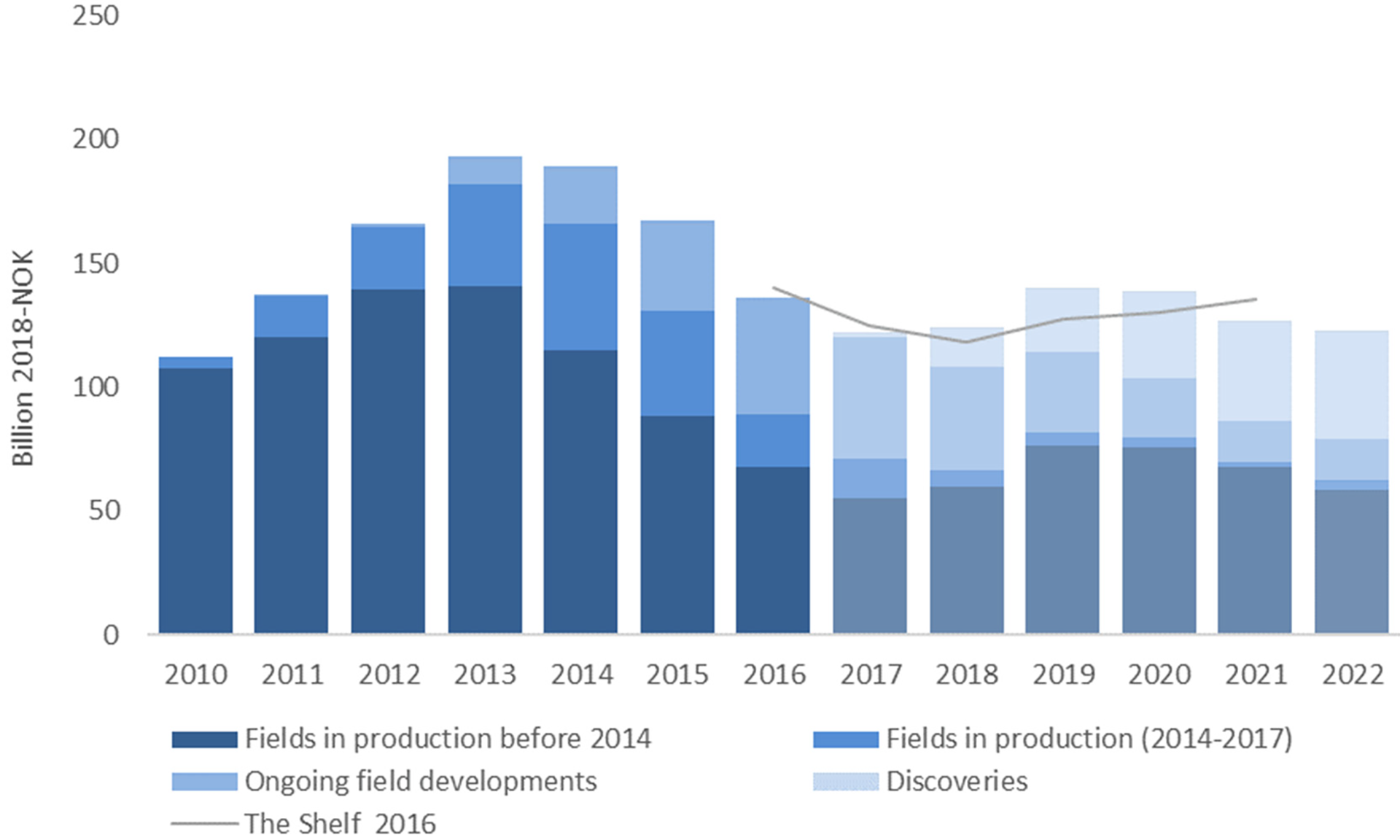 * Fields in operation are divided into two categories in order to clarify that parts of the investments are linked to completion of field development for fields that have recently started producing (fields that came on stream 2014‐2017).

Several ongoing field developments will also contribute significant investments over the next few years; this particularly applies for Johan Sverdrup construction phases I and II. A number of new field developments are also expected to start in 2018 and 2019 (labelled as discoveries in Figure 1‐2), the largest of which is Johan Castberg. These will also contribute substantial investments.

Investments in 2018 and beyond are somewhat higher than the estimate presented in the Shelf in 2016, because of several new projects starting somewhat earlier than what was presumed in 2016. 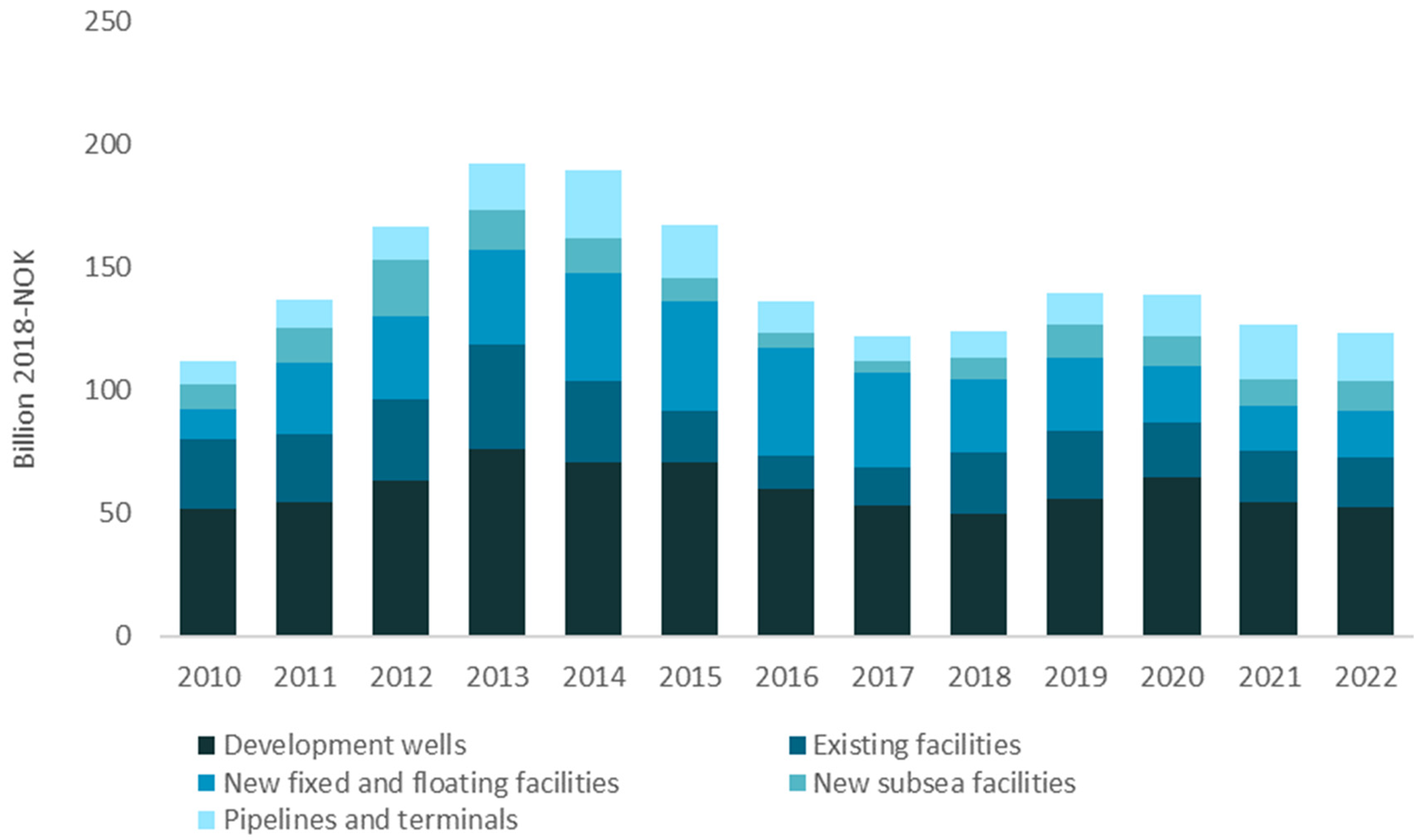 * Development plans were submitted earlier in 2017 for the the Bauge, Njord and Ekofisk 2/4 VC projects.

A number of projects are also expected to be decided over the next few years. This e.g. includes Johan Sverdup construction phase II, Troll phase III and new field developments such as 35/9‐7 (Skarfjell/Nova), 36/7‐4 (Cara), 6407/6‐6 Mikkel South and several discoveries in the area between the Oseberg and Alvheim fields in the North Sea.

The plans submitted to the authorities in the autumn of 2017 and the development projects expected to be submitted in 2018 and 2019 have a total projected investment level of about NOK 240 billion. New facilities and wells constitute the majority of these investments (Figure 2‐4). 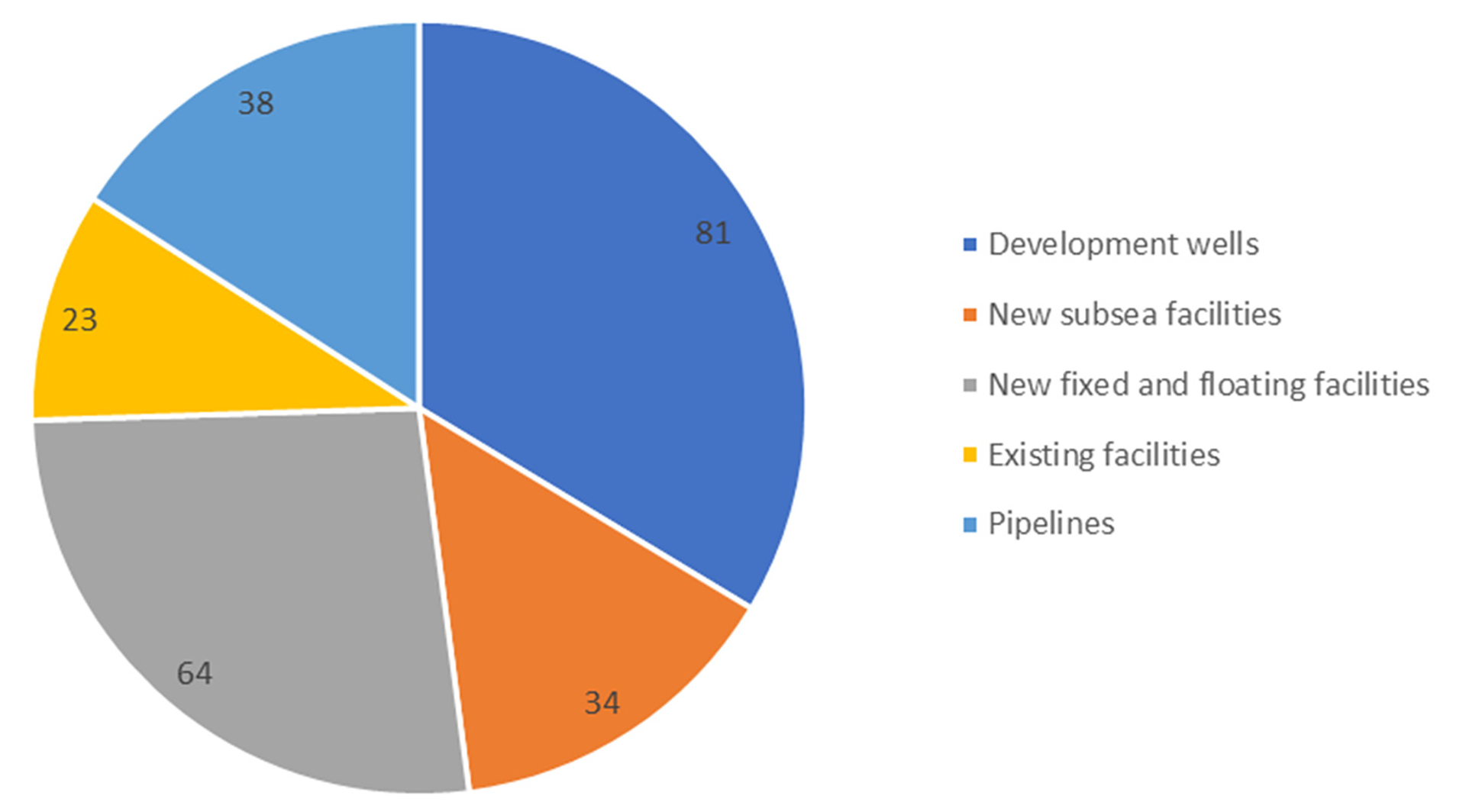 Figure 2‐4
Total investment in new field development projects (NOK billion). Includes projects with submitted plans for development and operations (PDOs) or exceptions from this in December 2017 and anticipated plans for 2018 and 2019.

Development decisions were made for multiple discoveries between 2010 and 2014, including older discoveries. The number of new discoveries has also declined in recent years. If new, major discoveries are not made relatively quickly in mature areas, where the lead time from discovery to development decision can be short, the lack of new developments will eventually result in falling investments over time. This also applies to operating fields. A number of major field projects will be carried out over the next few years, but there are few new, major projects being considered. With a study phase lasting several years from feasibility study to investment decision, this could mean less development activity on operating fields. 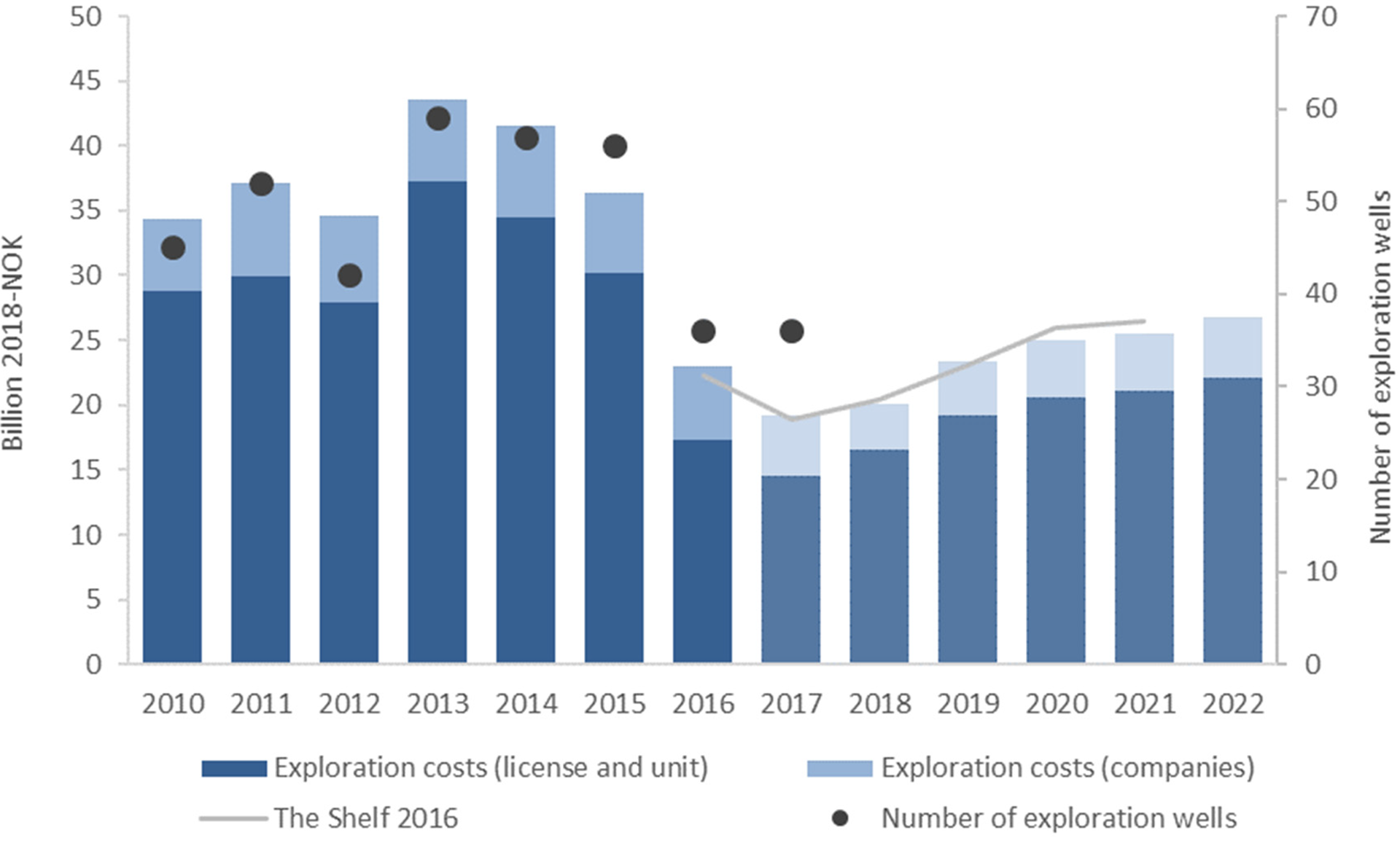 85 fields were in production at the end of 2017. This is in addition to the operation of pipelines and onshore facilities. The total operating costs were NOK 52 billion in 2017. After a period of reduction, operating costs are now expected to level off and then gradually increase. This is primarily due to new fields starting production. 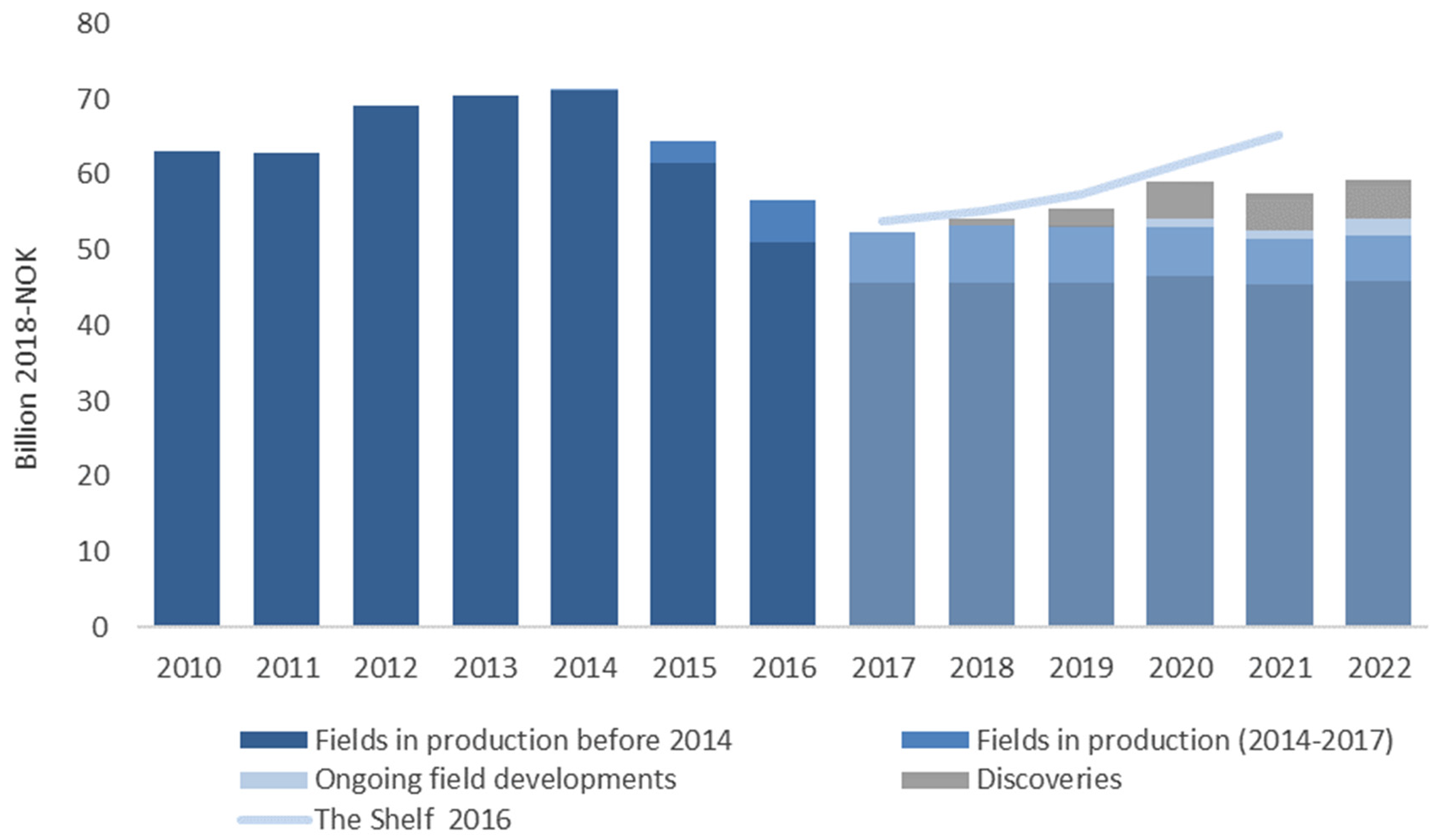 Figure 2‐7 shows the overall estimate for operating costs, investments, exploration costs, shutdown and disposal costs, as well as other costs. The Other costs category includes certain smaller items, such as concept studies and preparing for operations. 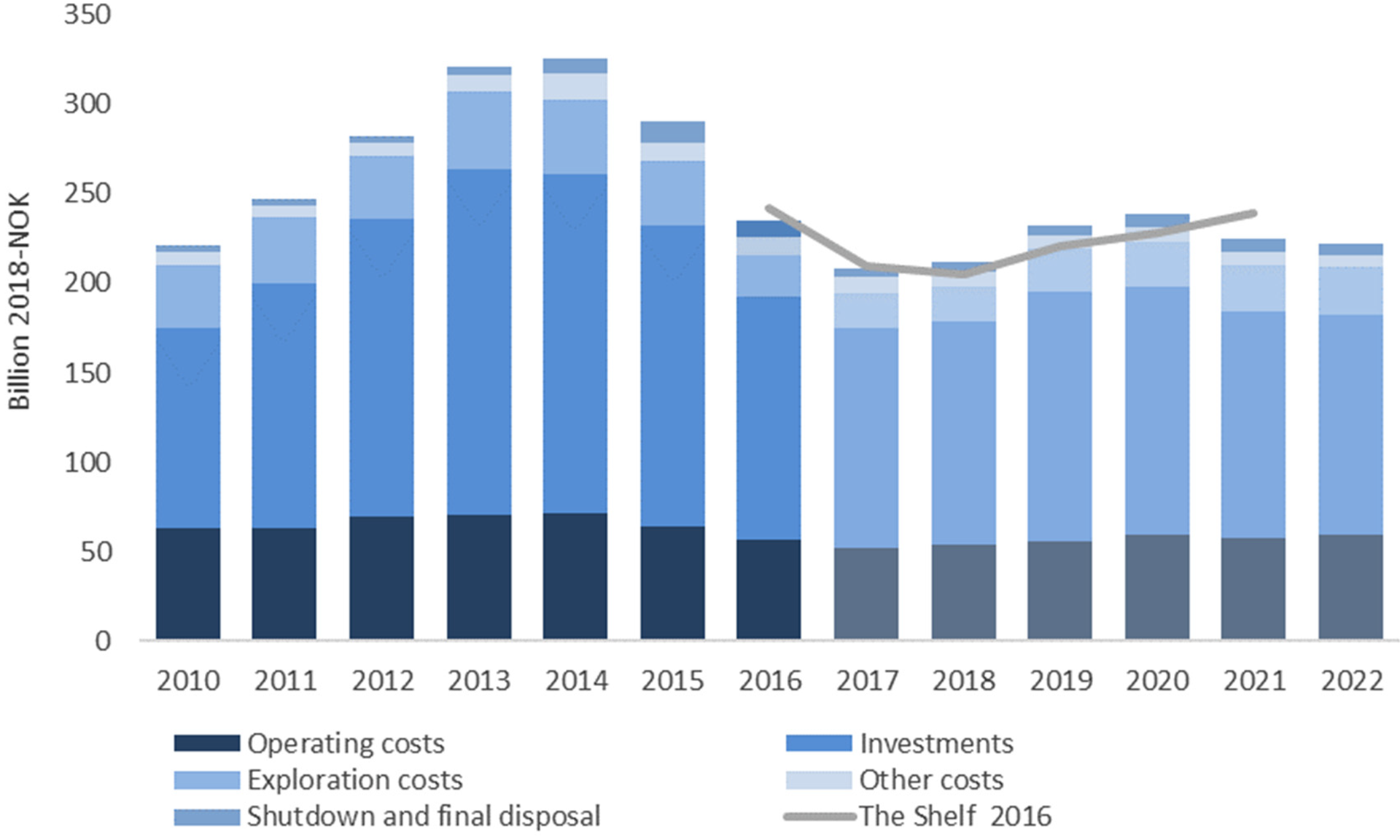 The reason that cost projections for the next few years are somewhat higher than the projections given last year, is quicker start‐up of new development projects and thus higher investments than presumed in the Shelf in 2016.