For 2019, investments are expected to reach over 140 billion kroner (excluding exploration), an increase of 13 per cent compared with 2018. Many ongoing projects, both new field developments and on operating fields, contribute to a relatively stable activity level. After 2019, a decline in investments is expected towards 2022. The investment level in new fields through the 2020 decade is largely also dependent on new, major discoveries. Exploration costs are expected to increase by 10 per cent from 2018 to 2019, after which we see a moderate reduction for the next few years.

The portfolio of new major development projects is reduced, and the addition of new discoveries in recent years has been less than before. This is an important reason for reduced investment activity after 2019. Resource growth from new discoveries and maturing of new projects on producing fields will be important to maintain the activity level over the longer term.

The industry has completed comprehensive work on cost control and efficiency, which has led to a considerable reduction in both exploration, development and operating costs. This is an important measure to ensure that the Norwegian Shelf is competitive, and has good resource management. The development in well costs is one example of this. Average costs per development well have fallen by more than 40 per cent from 2014 to 2018, cf. Figure 1-1.

A lower cost level is also reflected in the profitability of new projects that are approved. These are projects with good profitability for both the companies and the Norwegian society. The general scenario is that new development projects have good profitability and will be robust with significantly lower oil prices than the current level. 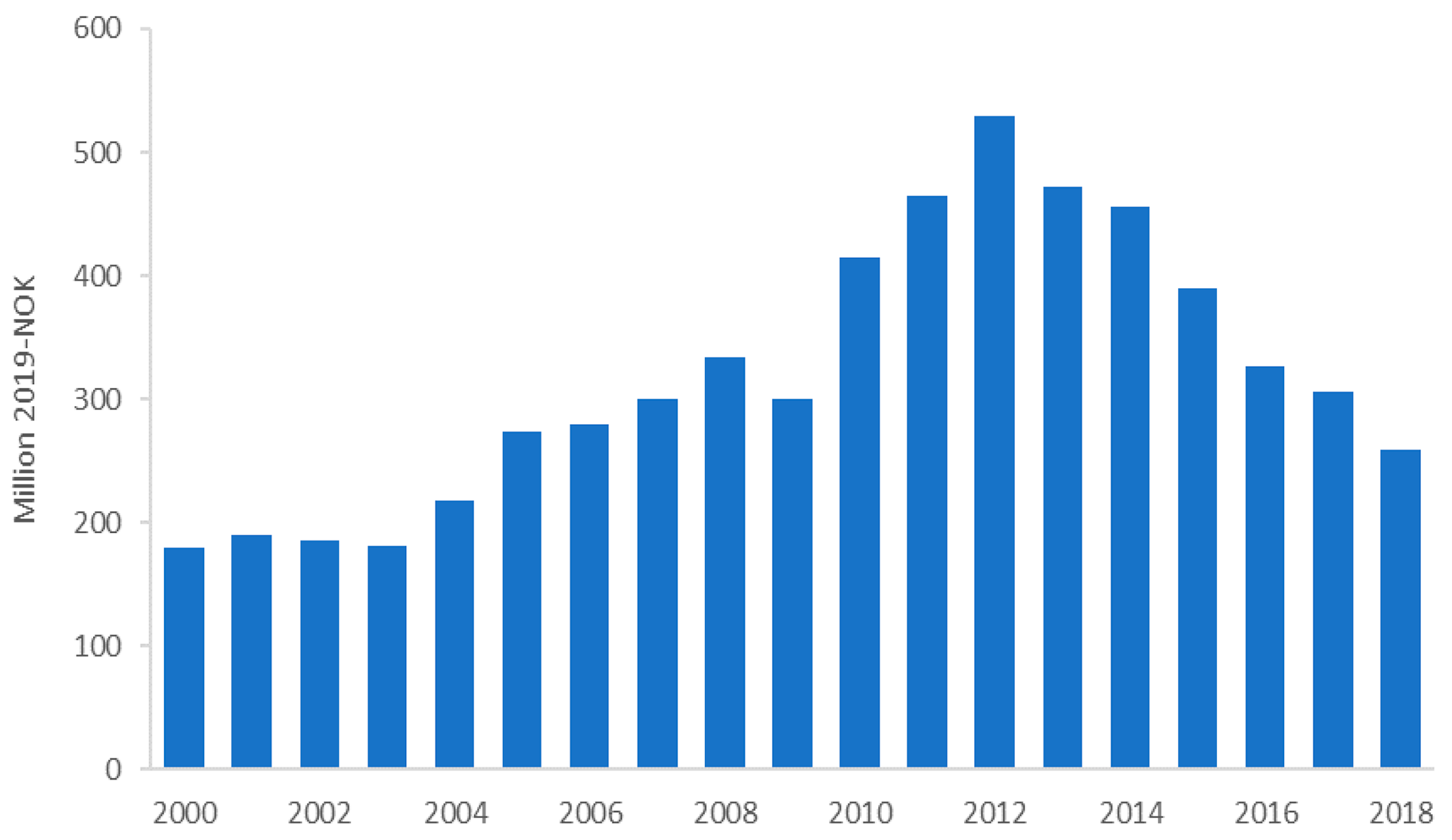 The NPD’s forecasts assume a weak real growth in the cost level in the time ahead. It is important that the companies maintain focus on cost control in order to realise new projects, both new field developments and projects on operating fields. This is underlined not least by oil price fluctuations in recent months. The industry itself has pointed to a number of sources for further cost reduction. A moderate cost level is a precondition for developing profitable projects in the years to come.

Investments levelled out in 2018 at around 125 billion kroner (Figure 1-2). Several ongoing field developments, led by Johan Sverdrup and Johan Castberg, will contribute to substantial growth in investments in 2019. In 2019, investments are expected to be in excess of 140 billion kroner, a growth of 13 per cent from 2018. 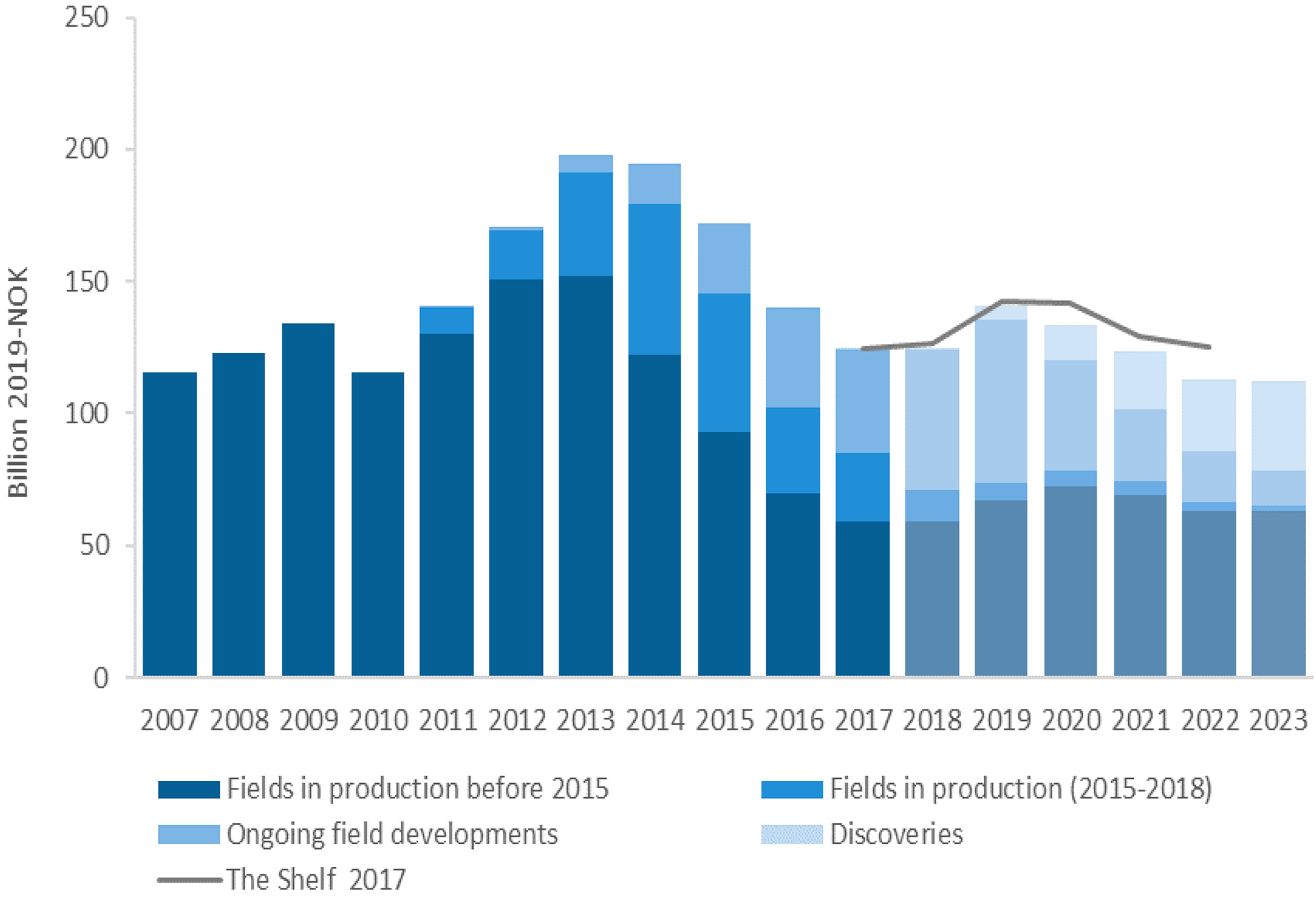 1 Operating fields are divided into two categories in order to highlight the fact that parts of the investments are linked to commissioning of field developments for fields that have recently come on stream (fields that came on stream 2015-2018).

There is considerable activity on operating fields, and several development projects and upgrades contribute to investment growth in 2019. The platform on Njord is being upgraded, and recovery from the Snorre field will be increased through the Snorre Expansion subsea development. Other major projects to improve recovery on operating fields include Valhall West Flank where a new wellhead platform will be installed, and investments in new wells and subsea facilities on Troll (Phase III). In addition to these projects, generally high drilling activity on operating fields is expected in the next few years.

Investments of between 110-115 billion kroner are expected in 2022 and 2023. After the commissioning of major projects such as Johan Sverdrup and Johan Castberg, the NPD sees limited new major development projects that can help to lift the investment level in the years after 2019.

Figure 1-3 shows overall investments in ongoing and new field development projects, and illustrates the significance of Johan Sverdrup and Johan Castberg, both for the high investment level in 2019, but also for the reduction in investments in the 2020-2022 period. 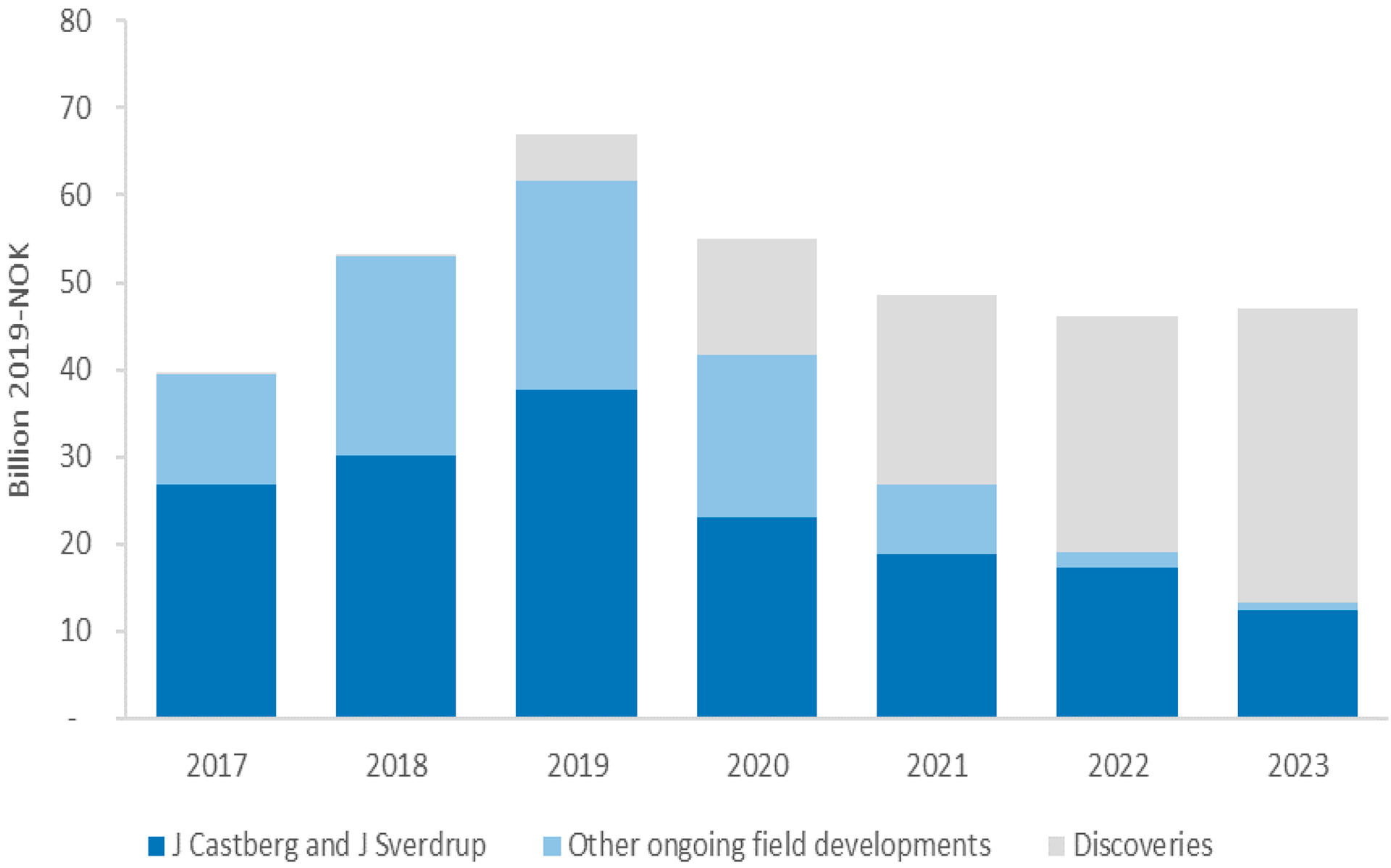 Other ongoing developments that will contribute significant investments in the next few years are commissioning of Martin Linge and the subsea developments Fenja (to Njord) and Nova (to Gjøa).

The investments from 2020 and forward are somewhat lower than the estimate presented in The Shelf in 2017. This is due e.g. to postponement of certain new field development projects and lower investment estimates for specific developments. 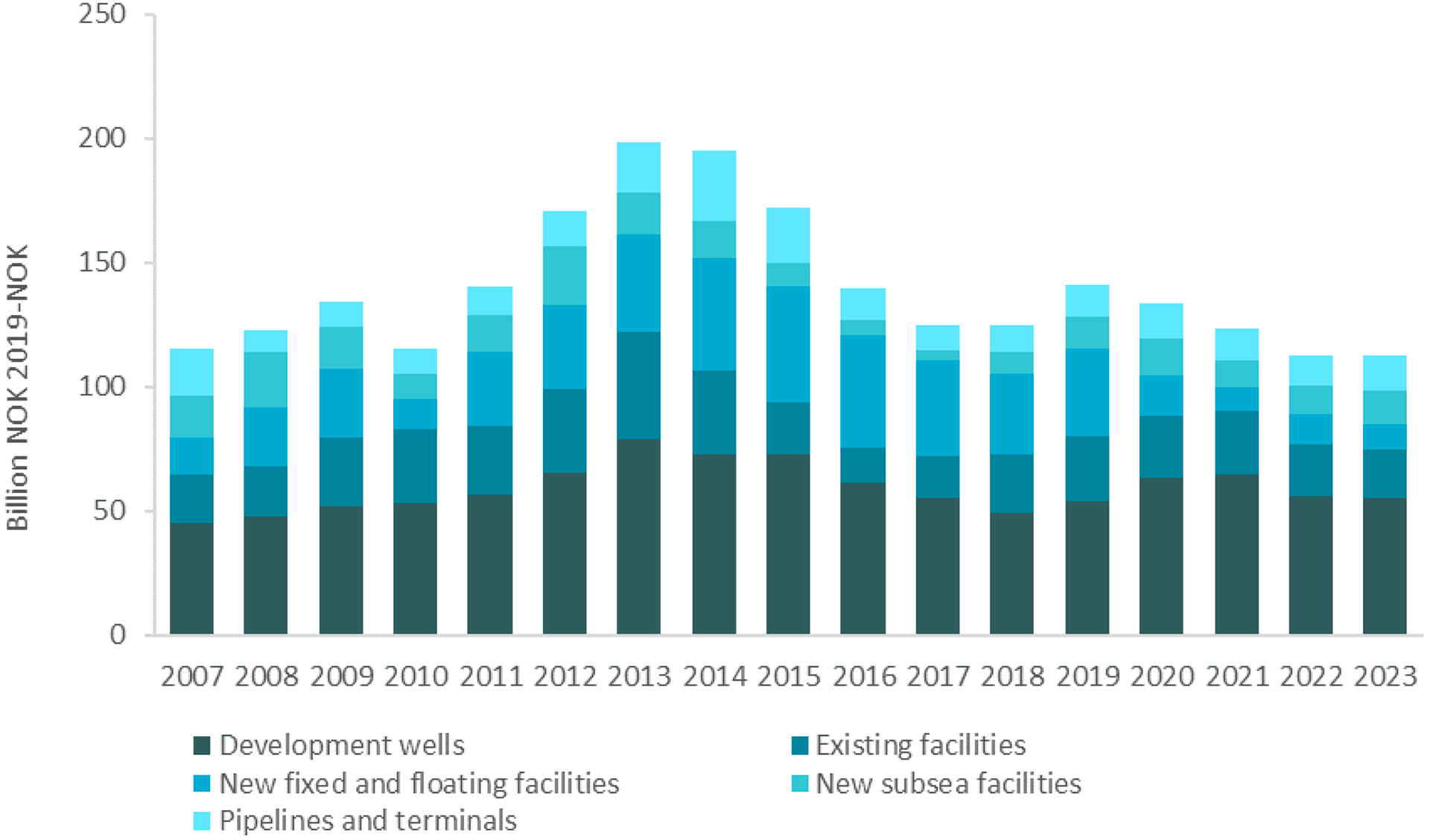 Three development plans were submitted for approval by the authorities in 2018: Nova, Troll Phase 3 and Johan Sverdrup construction phase 2.

It is expected that several projects will be approved in the next couple of years. This applies, for example, to new field developments such as 16/4-6 S (Luno II), 30/11-8 S (Krafla) and 36/7-4 (Cara). The NPD also expects investment decisions for redevelopment of older fields such as Tor and Hod.

At year-end, the discovery portfolio contains 85 discoveries. Despite the fact that most of these discoveries are expected to be profitable from an economic standpoint, there are a number of factors that could result in it taking some time before development decisions are made. Among other things, that most of the discoveries are expected to be developed as subsea fields tied in to existing infrastructure. These discoveries therefore depend on available process capacity on the relevant host facilities before development can be approved. Many of the discoveries have recoverable gas resources. Access to available capacity in the gas infrastructure can also entail that licensees will wait to make development decisions. 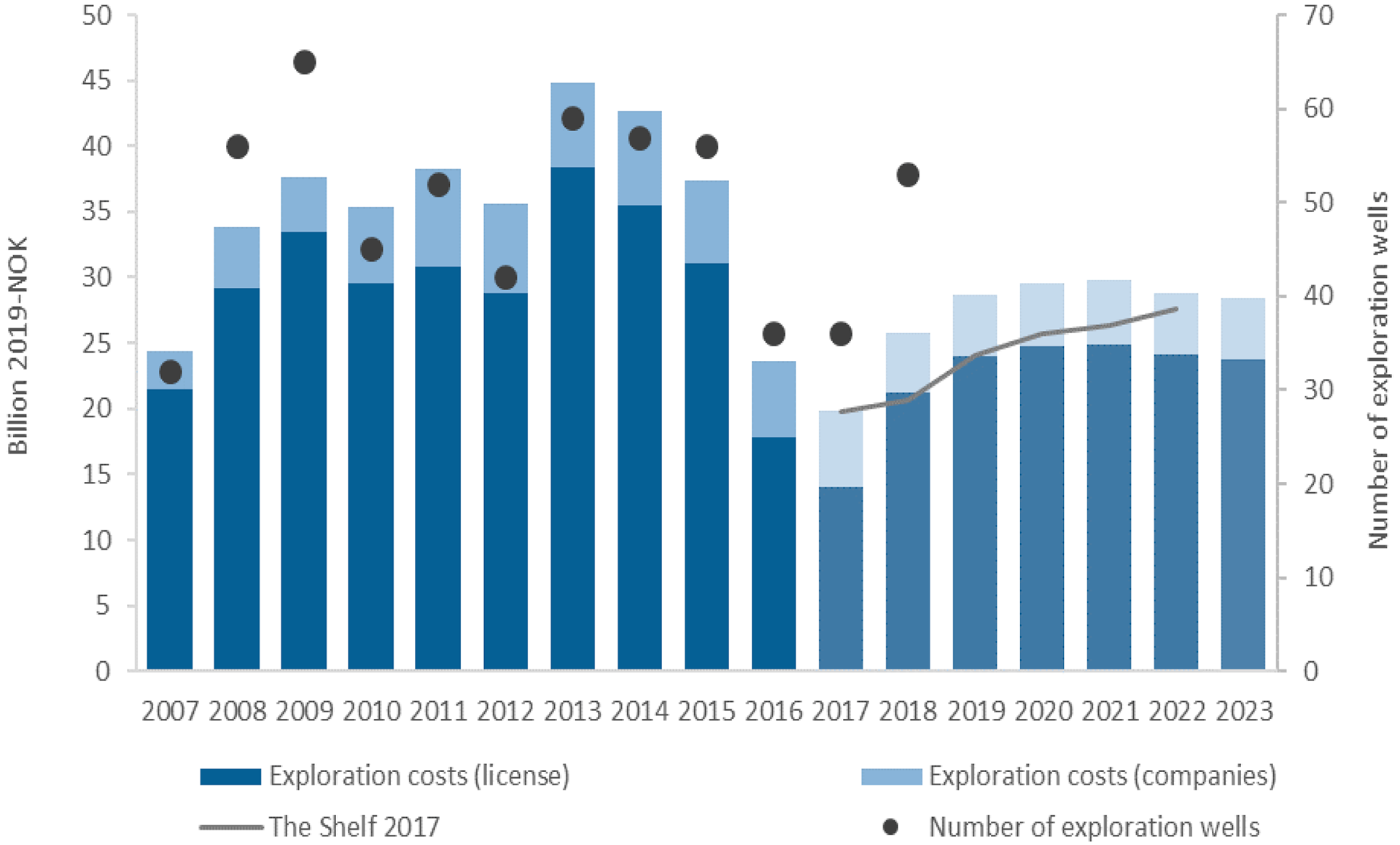 83 fields were producing at the end of 2018, in addition to operation of pipelines and land facilities. The total costs associated with operation of the infrastructure amounted to 58 billion kroner in 2017 (Figure 1-6). Following a period of reduction, operating costs are now expected to level off. In isolated cases, the start-up of new fields, particularly Johan Sverdrup, Johan Castberg, Martin Linge and Yme (with leased production facility) will contribute to increased operating costs. The increase from these fields will be partially offset by fields that are shut down. 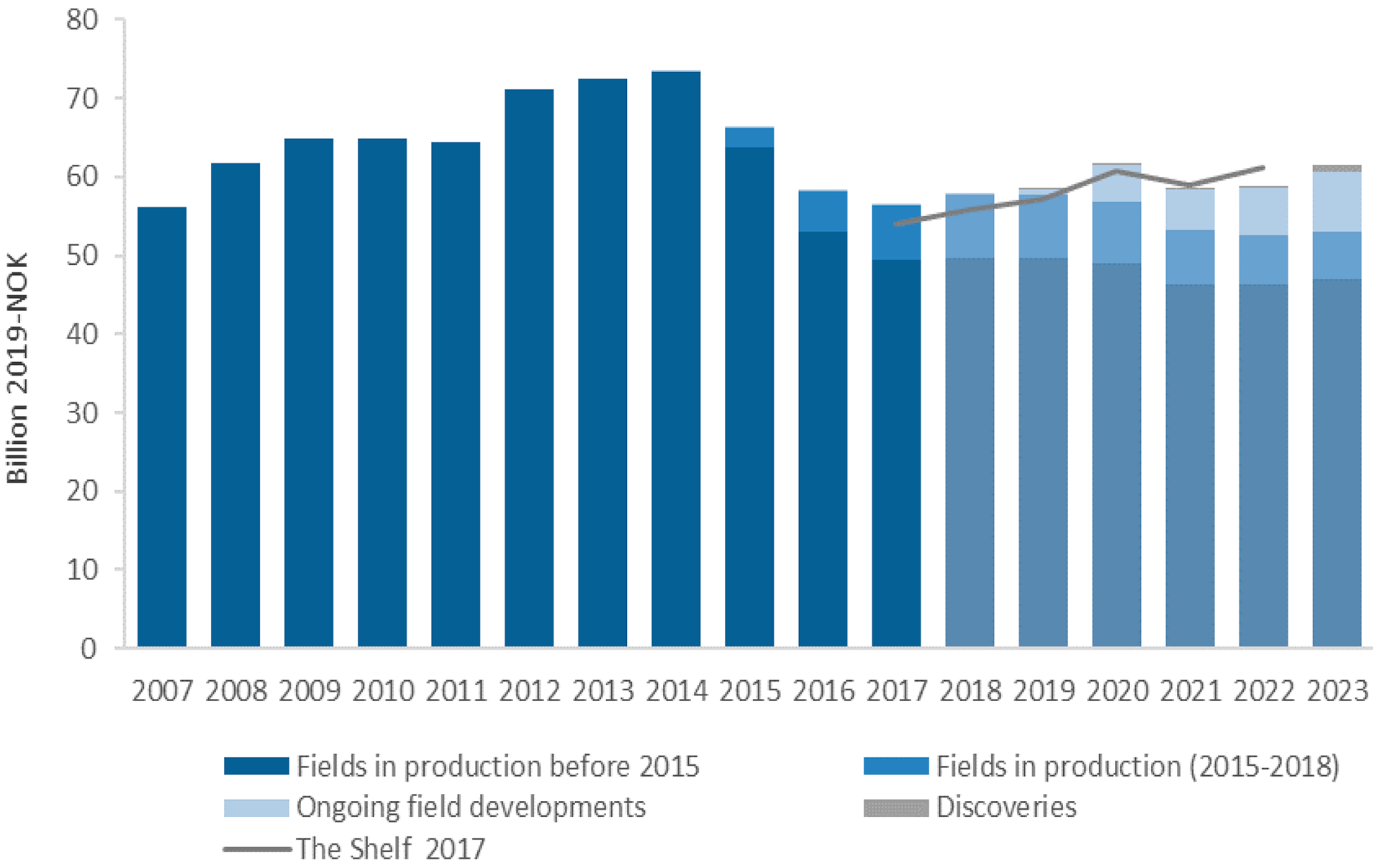 Figure 1-7 shows the overall forecast for operating costs, investments, exploration costs, shutdown and disposal costs, and other costs. The ‘other costs’ category includes certain minor items, such as concept studies and preparations for operation.

The costs associated with shutdown and disposal are expected to be low in the next few years. Some fields plan to cease production within a timeframe of five years. These are largely subsea fields where this type of cost is limited. Costs will also accrue in connection with shutdown and removal of certain facilities on fields that will remain in operation.

Total costs in 2018 were around 220 billion kroner. As a consequence of higher investments and exploration costs, total costs will increase from 2018 to 2019. Despite a decline in investments from 2019, the activity level will remain high, viewed in a historical perspective. 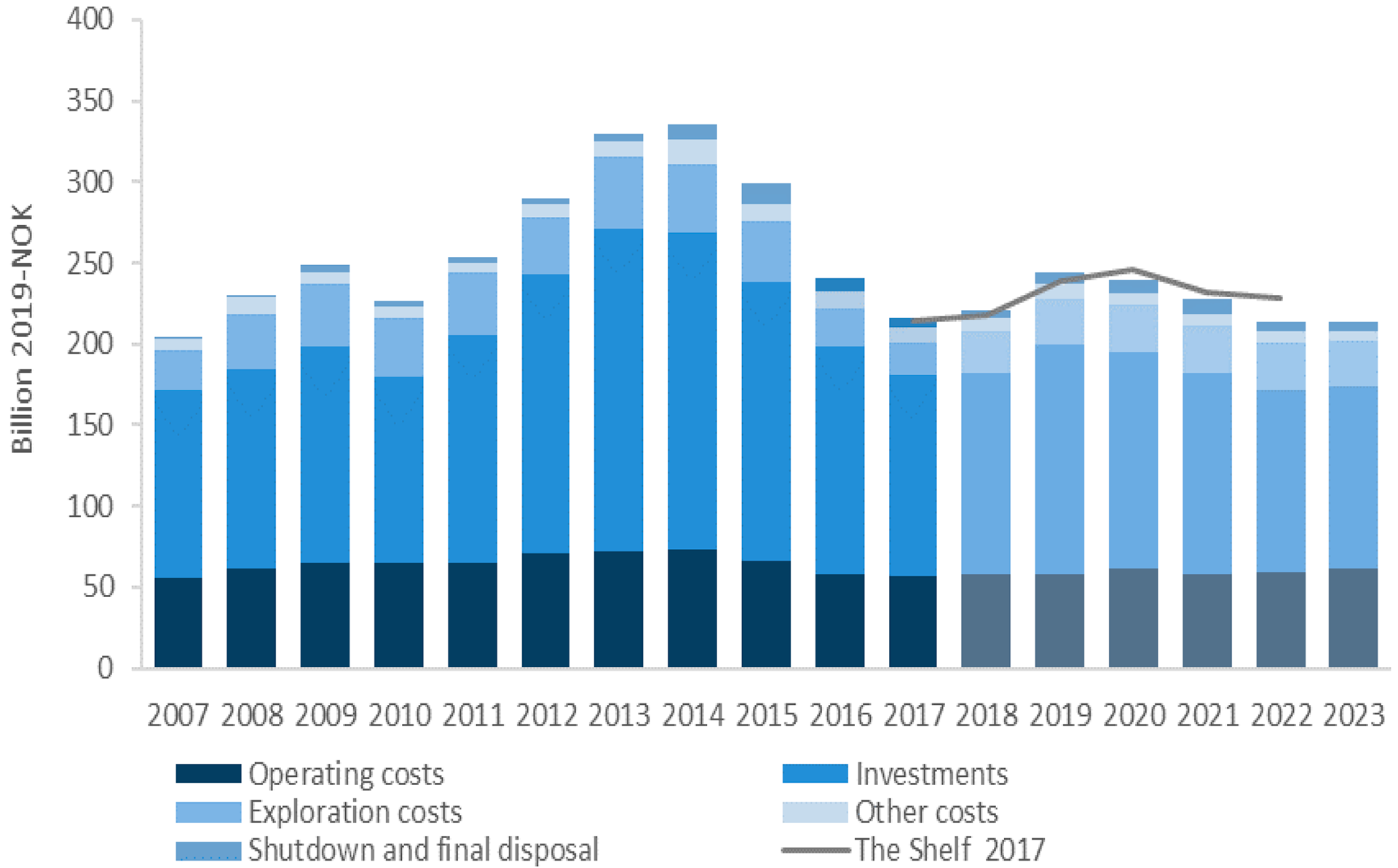