3 - Further development of a mature shelf

At year-end, there were 83 producing fields on the Shelf. One new field came on stream during 2018, three new plans for development and operation were submitted and nine plans were approved. Two projects also secured PDO exemptions and three fields were shut down. The figure below shows that the number of fields in production remains high. 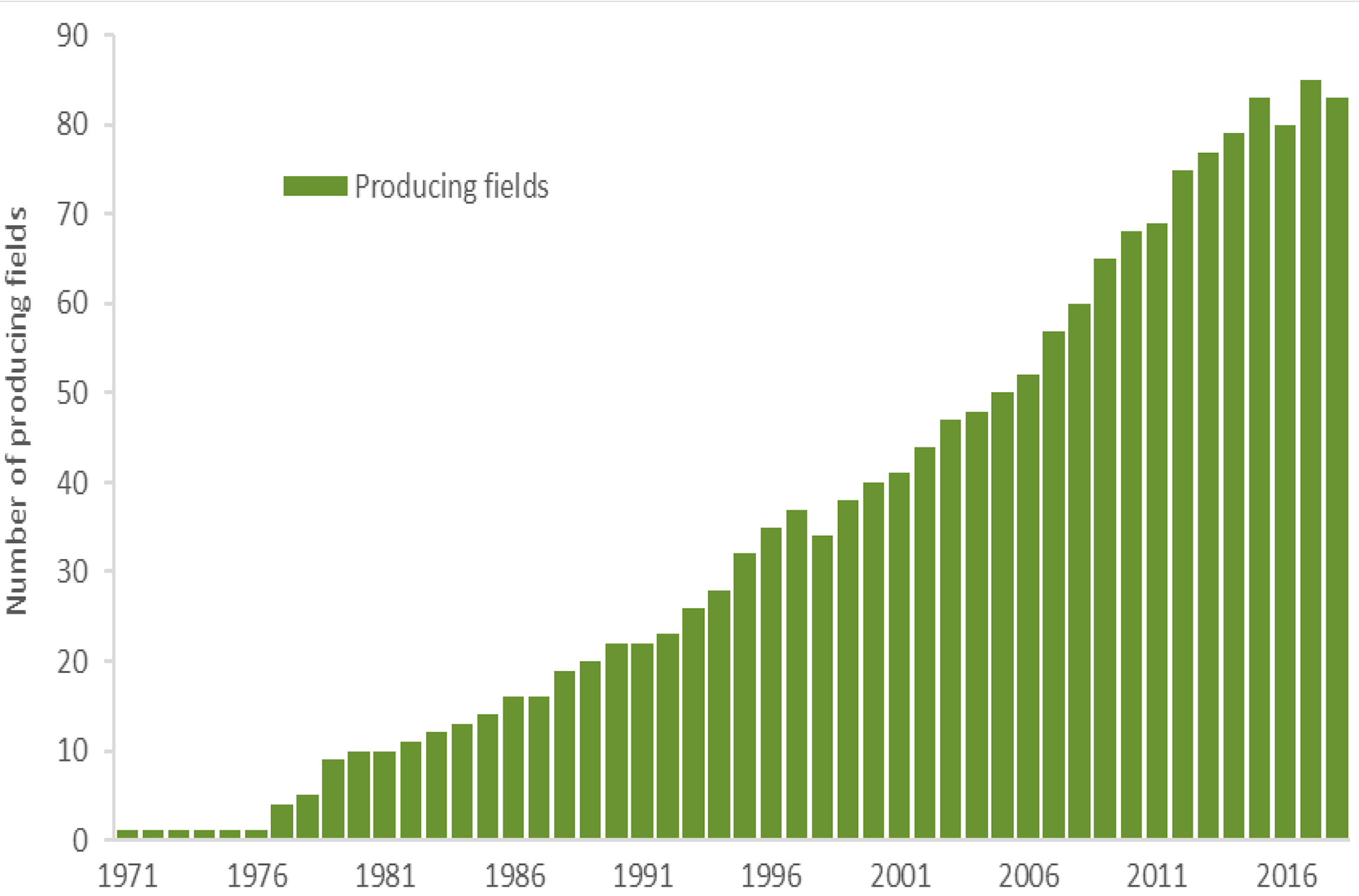 Figure 3-1
Number of fields in production through the years

The Aasta Hansteen gas field started producing in 2018 as the first development in the northern part of the Norwegian Sea. The field is situated about 320 kilometres west of Bodø. The water depth in the area is 1270 metres. Never before has a field been developed in such deep water on the Norwegian Shelf.

Simultaneously with start-up of Aasta Hansteen, the Polarled pipeline commenced operation to route gas from the field to the process facility at Nyhamna in Møre og Romsdal county, before it is sent on to Europe. Aasta Hansteen and Polarled provide new infrastructure in the northern part of the Norwegian Sea, thus opening up new opportunities in this part of the Shelf.

The development solution, which involves a floating cylindrical Spar platform, is the first of its kind in Norway, and the world’s largest. Investment costs for the development are about 37.5 billion kroner. 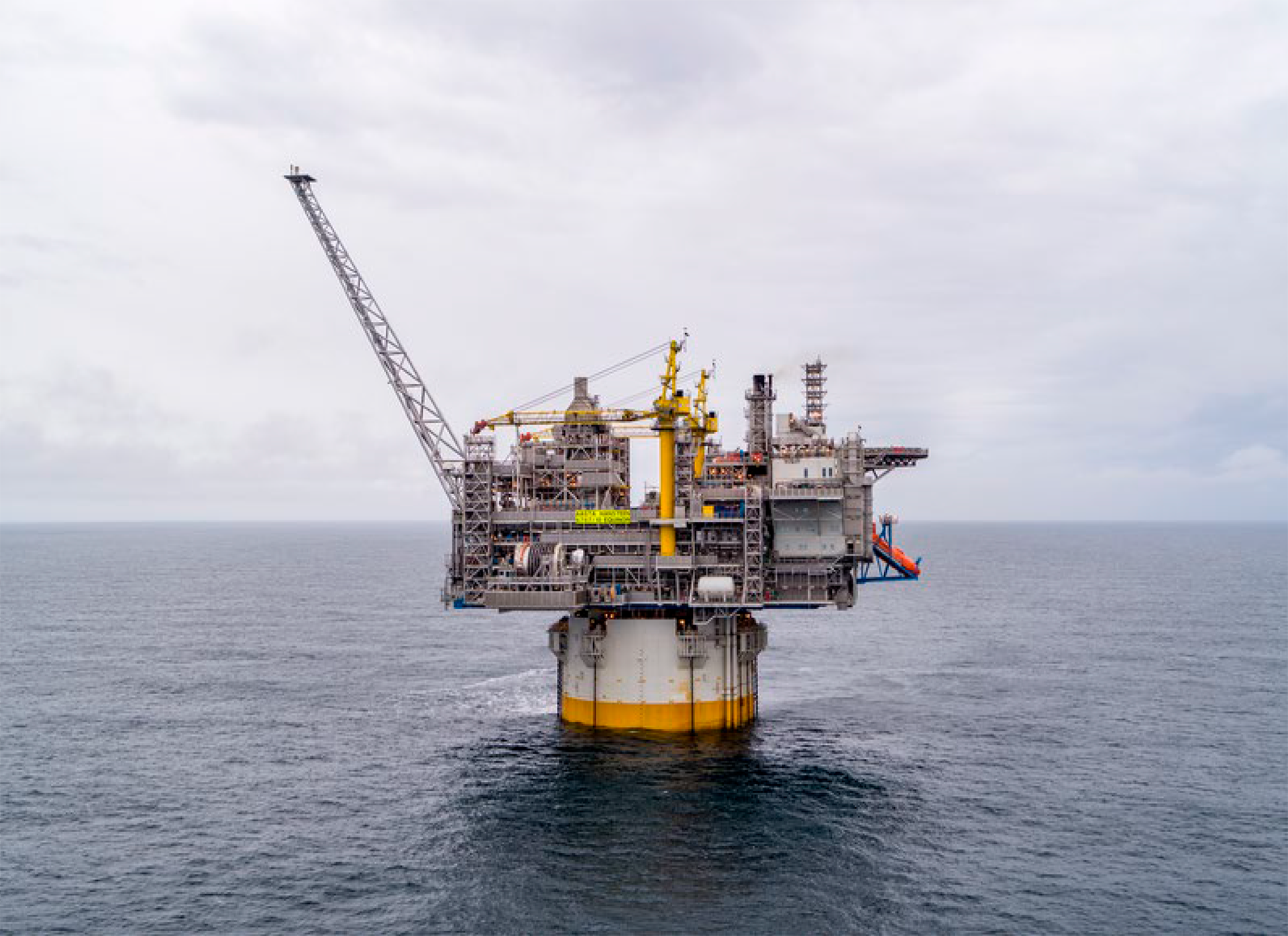 Johan Sverdrup construction phase 2 is one of the three development plans submitted in 2018. The overall development of this field is the largest industrial project in Norway in a decade. The investments and revenues to the licensees, suppliers and the State will have a major positive impact for society. The plan that is now awaiting approval in the Storting describes the second stage of construction for the field, including expansion of the field centre with a new process platform and installation of five new subsea templates. An area solution for power from land to Johan Sverdrup, Edvard Grieg, Ivar Aasen and Gina Krog will be established as part of the second construction phase. 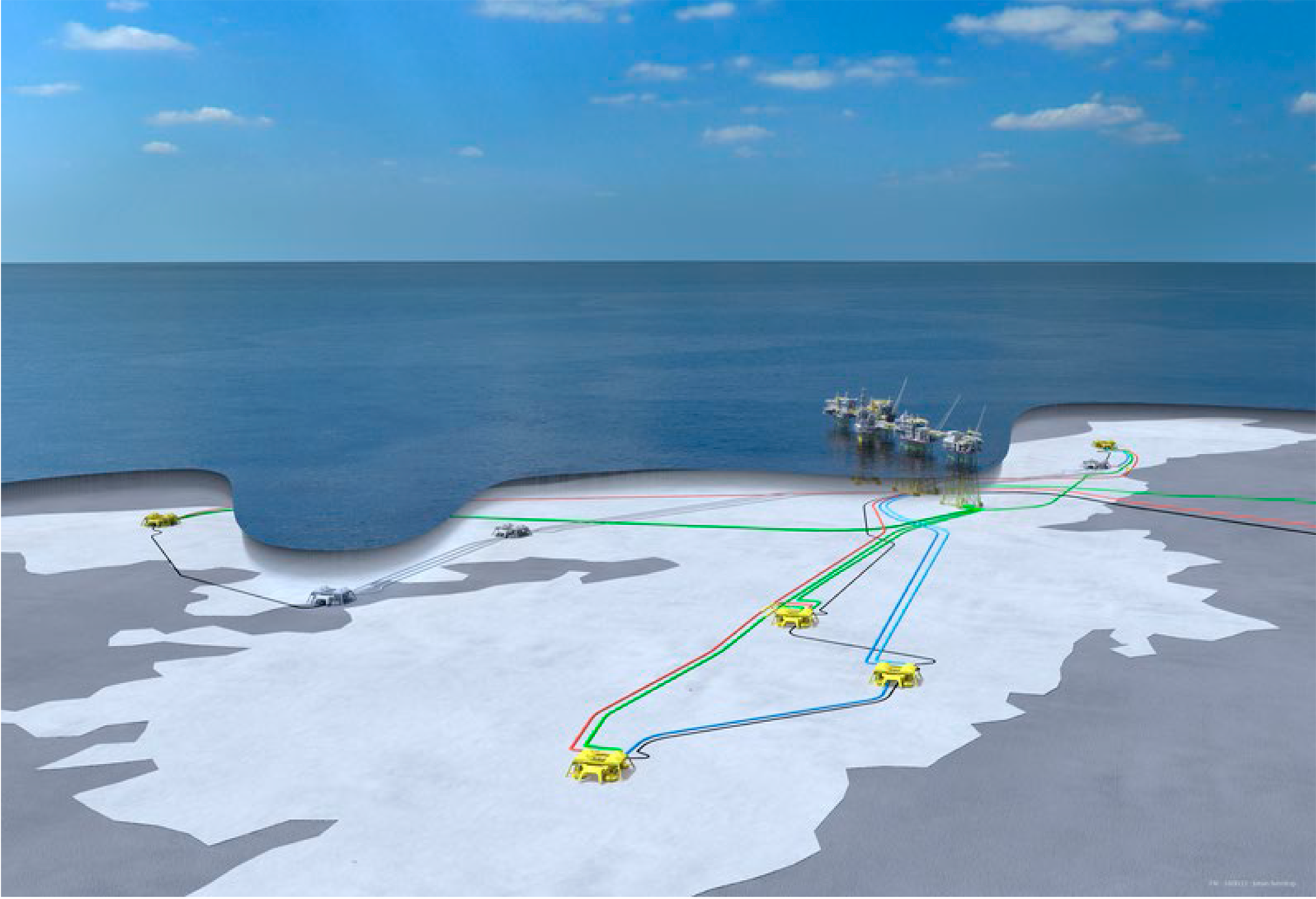 Troll Phase 3 is the last phase of the Troll development, so far, and it relates to production of gas from the gas cap over the oil zone on the western part of the field – Troll Vest. The development plan was submitted and approved in 2018. In addition to being Norway’s largest gas producer, Troll has also been the largest oil producer in recent years. Therefore, it has been important for both the authorities and the licensees to identify the right time and the right level of gas production from Troll Vest, without adversely affecting oil recovery. The gas reserves in Troll Phase 3 amount to about 360 billion Sm3 of a total of around 1425 billion Sm3 recoverable gas reserves in the entire field.

Troll Phase 3 will be developed in several stages, of which only the first stage was included when the development plan was submitted. In the first phase, two subsea templates will be installed and eight production wells will be drilled. The gas will be sent to Troll A for processing and compression before further transport to the process facility at Kolsnes. Investments for the first stage of Troll Phase 3 are nearly 8 billion kroner. The project is very profitable and will generate significant values. 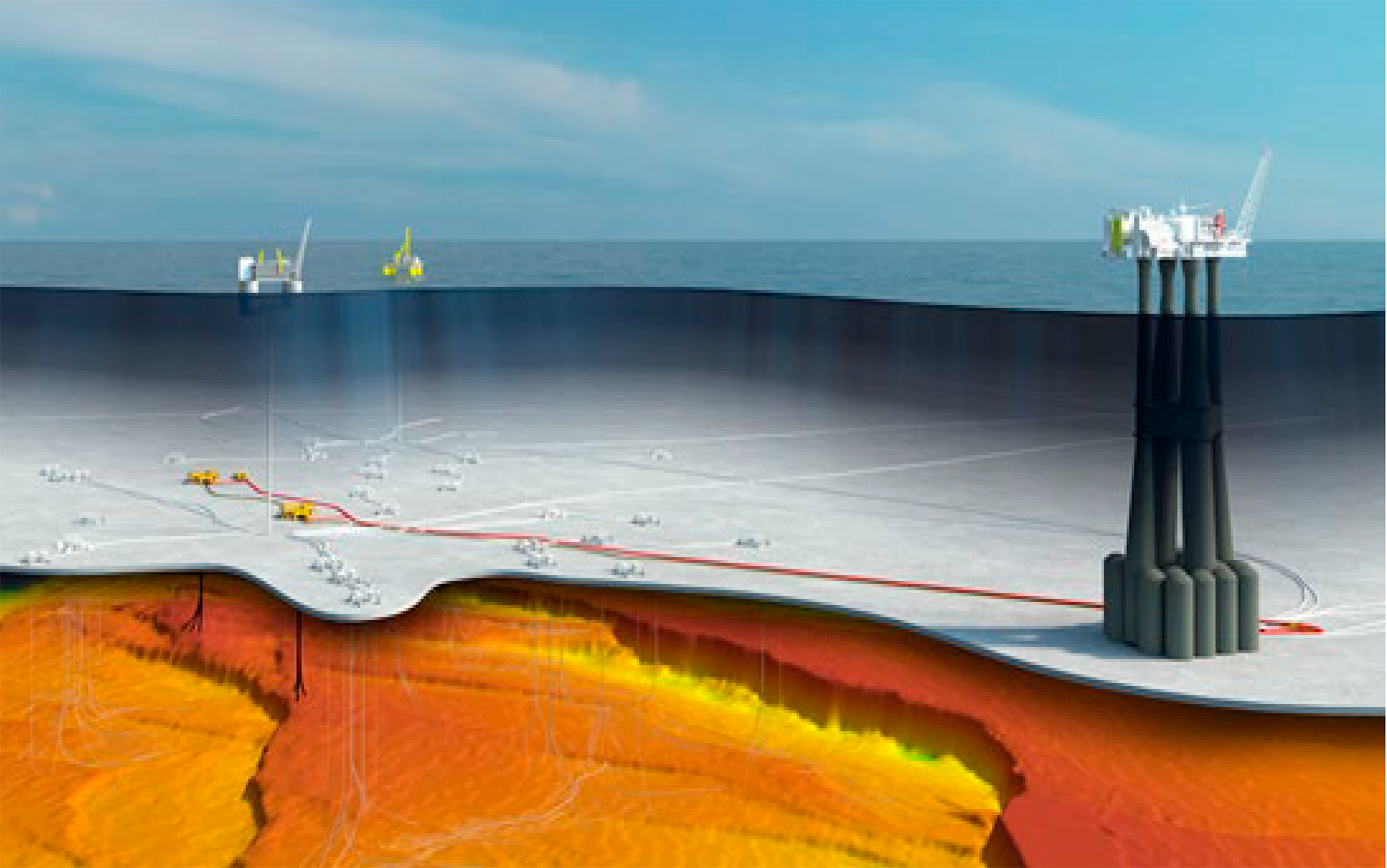 The third development plan submitted to the authorities in 2018 relates to the Nova subsea development in the northern part of the North Sea, southwest of Gjøa. The field is located in a mature area, and will be tied in to existing infrastructure on Gjøa. The field can thus make use of available capacity for a cost-effective development. The selected development solution entails installation of two subsea templates.

Total reserves for the Nova development are around 12 million Sm3 o.e., and projected investments are about 10 billion kroner.

Approved development plans and use of new and existing infrastructure

One of the new stand-alone developments is Johan Castberg, the third field to be developed in the Barents Sea. In the planning phase, the NPD has been focussed on flexibility in the development concept so as to have the capability to phase in new discoveries in the area. The development solution that was selected safeguards this consideration. Several minor discoveries have since been made in the area that can be tied in to the field, such as the Skruis discovery, proven in the autumn of 2018. 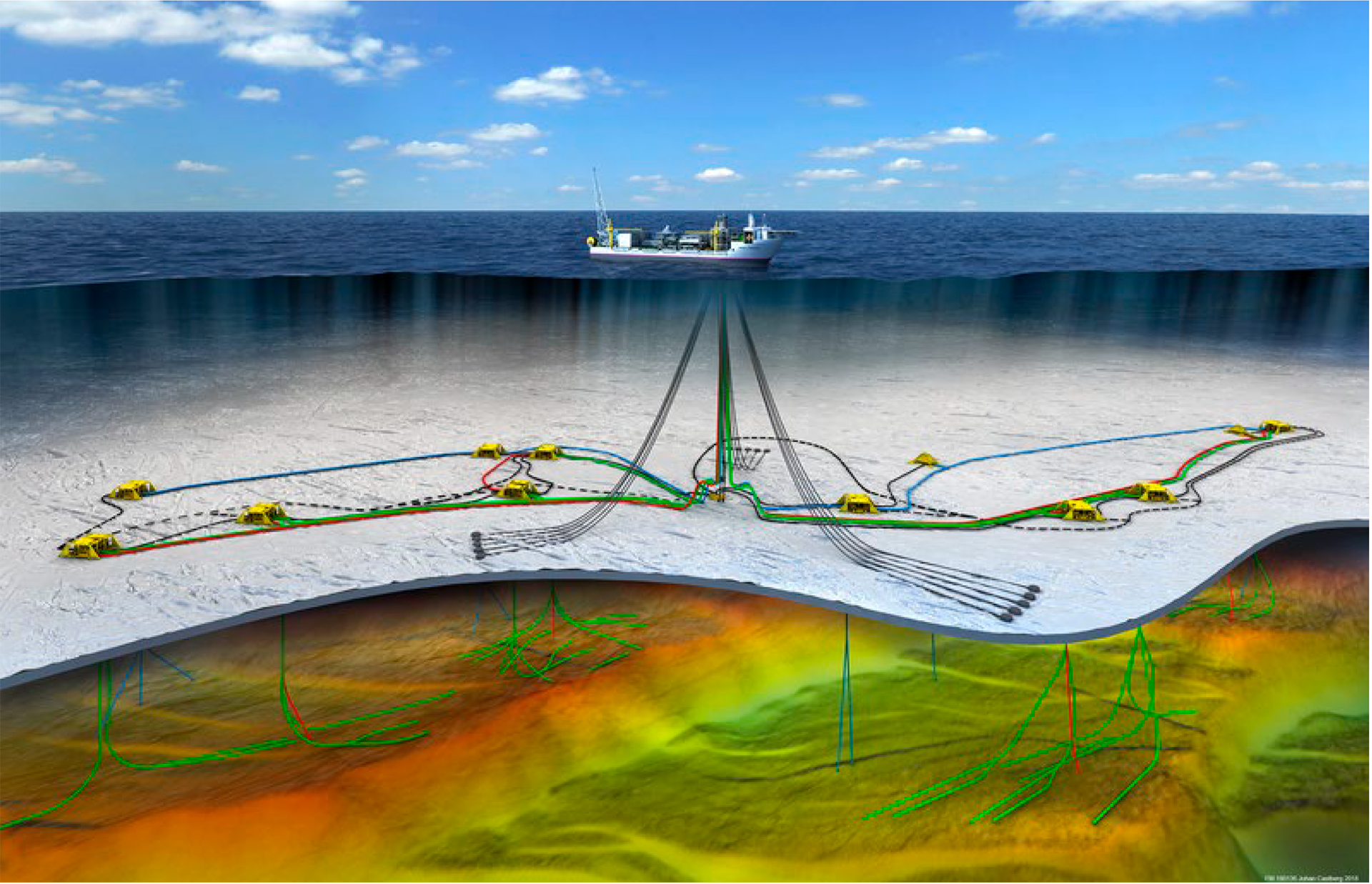 Njord is an example of an old field that has had its lifetime extended. The facilities will be upgraded at a cost of about 16 billion kroner. Njord is the host field for Hyme and will become the host field for the new Bauge and Fenja developments. The development plan for the latter field was approved in 2018. The development in the area around Njord illustrates the importance of cooperation across production licences to allow for development of minor discoveries with different licensees than the host field. This also highlights the importance of maintaining today’s facilities with a view to future use, and exploitation of existing infrastructure. 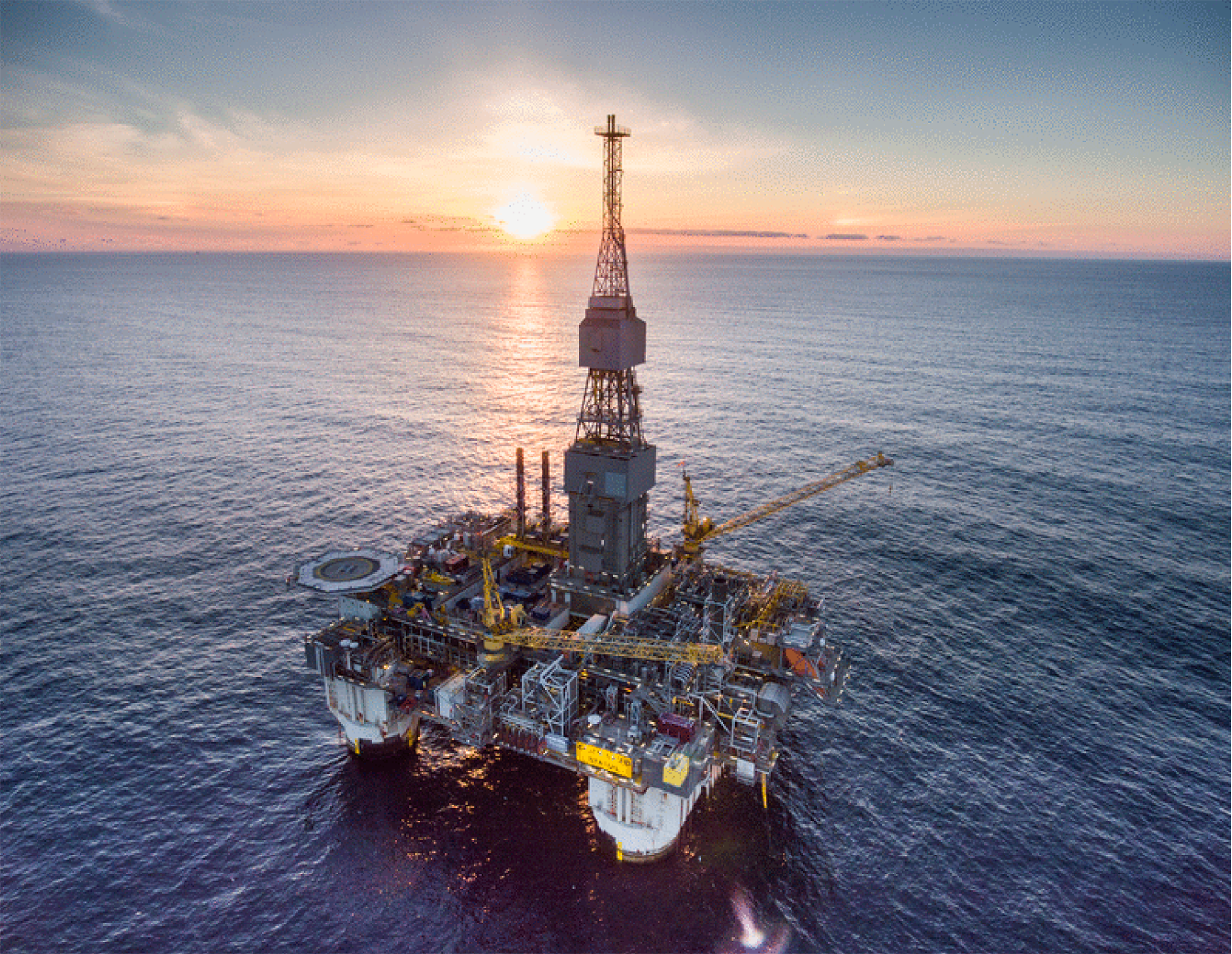 3.2 Use of data and new technology for increased value creation

The Norwegian Petroleum Directorate works to ensure that all socio-economically profitable resources are produced. To achieve this, different improved recovery measures must be tested on the fields, both on operating fields and in new developments. We believe that better understanding of the subsurface and testing and implementing new technology entails substantial potential value.

Several improved recovery methods have been tested in 2018, including a new type of seabed technology for injection of seawater on Ekofisk, and new drilling and well technology to increase production from tight reservoirs on Ekofisk and Valhall. Results from these tests provide important data and knowledge that contribute to further development and use of these of these technologies.

It is often the large fields with good economy that have an opportunity to be the first to try out new methods. Johan Sverdrup is a good example of this, as the field is expected to try out polymer injection as a method to improve oil recovery. This is important so as to chart the potential for an increase of recoverable reserves from the field.

The Konkraft report, “Competitiveness – changing tide on the Norwegian continental shelf”, published in early 2018, highlights the importance of collecting and managing data, as well as the significance of sharing data. New methods and new technology for acquiring and storing large volumes of data and new methods for advanced data processing also make it possible to use this data better. It is important that these opportunities are used to ensure better exploitation of the petroleum resources.

In an effort to inspire the players to implement measures to improve recovery, the Norwegian Petroleum Directorate awards an improved recovery prize – the IOR award – every other year. In 2018, the prize was awarded to the owners of the Alvheim field, with its operator Aker BP and partners ConocoPhillips and Lundin.

The licensees on Alvheim have shown the willingness to take risks to find and produce more oil in the area. Implementation of newly developed technology, sharing data and the ability to see the area as a whole have contributed to more than doubling the reserves from Alvheim since the plan for development and operation was approved.

The next IOR prize will be awarded at ONS in 2020.

Reserves are resources for which development plans have been adopted. There is steady growth of oil reserves on the Norwegian Shelf. In 2018, for the first time, reserve growth exceeded the Norwegian Petroleum Directorate’s ambitious curve for reserve growth for the period 2013 - 2023. The reasons for this very positive development in reserves are that more fields are being developed and more work is being done to improve recovery on fields in operation. This shows that both the authorities and the industry do good work to further develop the Shelf. It is important that this work continues in order to maintain reserve growth. 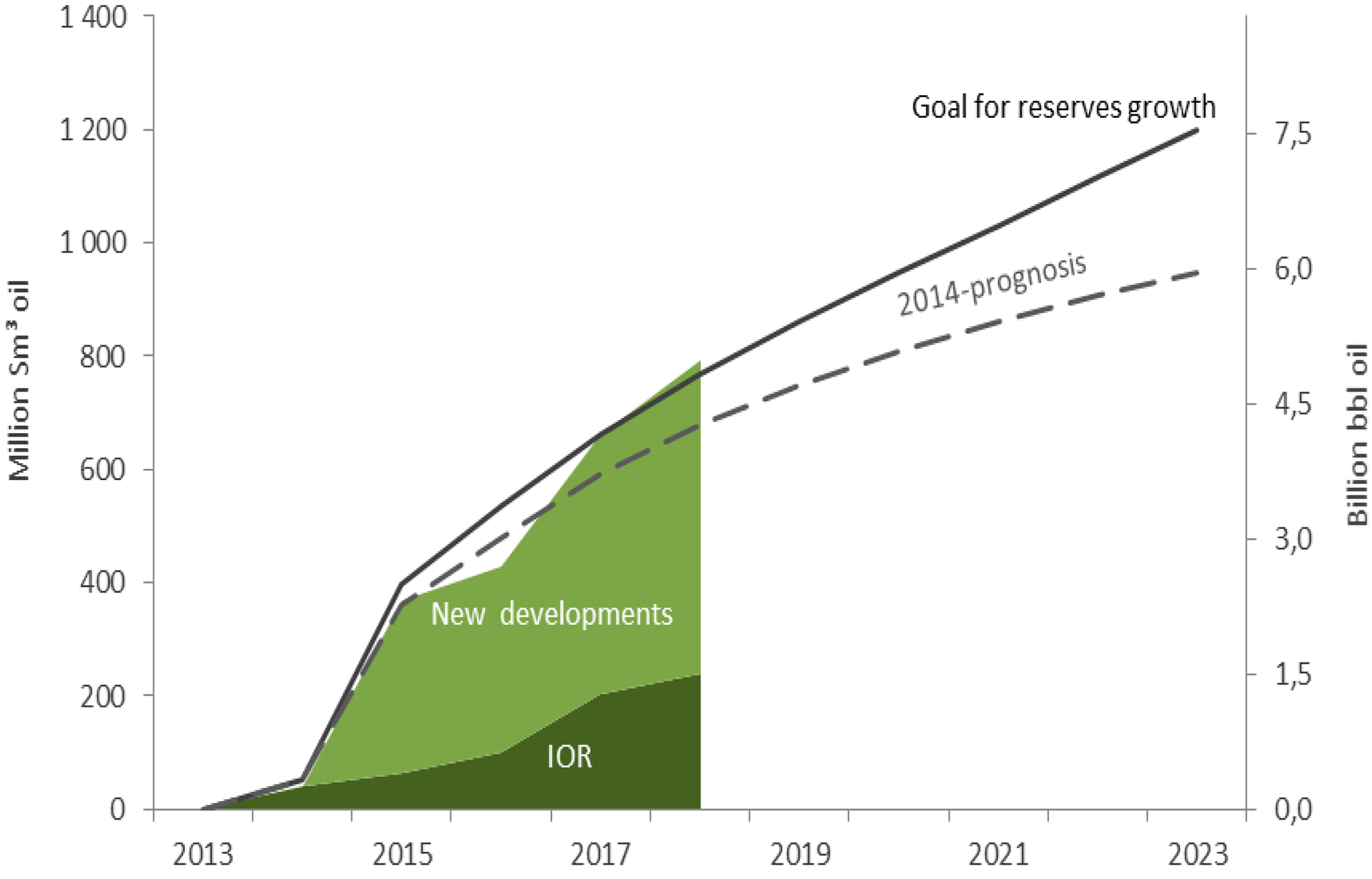 The distribution of production between companies on the Norwegian Shelf has varied over time. Many new companies have come over the last ten years, and there have been several acquisitions and mergers. This has contributed to increased diversity and new ways of working. Major international companies have sold ownership interests and operatorships, but they remain an important presence on the Shelf and are responsible for a large percentage of the production. We also see the emergence of new medium-sized oil companies whose primary focus is the Norwegian Shelf. This diversity of companies is important if we are to exploit all the various business opportunities found on the Shelf. This is a welcome and positive development. At the same time, a continued active and competent Equinor is essential if we are to achieve petroleum policy goals.

Figure 3-8 shows the development in production distribution, divided between European gas and power companies, small and medium-sized companies and major international companies. Equinor and Petoro, which account for around 60 per cent of the production throughout the entire period, are not included in the figure.

Figure 3-9 shows the development in the number of field operators since 2000. It shows that we have gained more new operators over the last decade, including several medium-sized companies.