Exploration activity in 2018 has been considerably higher than in the two previous years. The number of exploration wells has increased dramatically, and 87 new production licences were awarded, which is a new record. 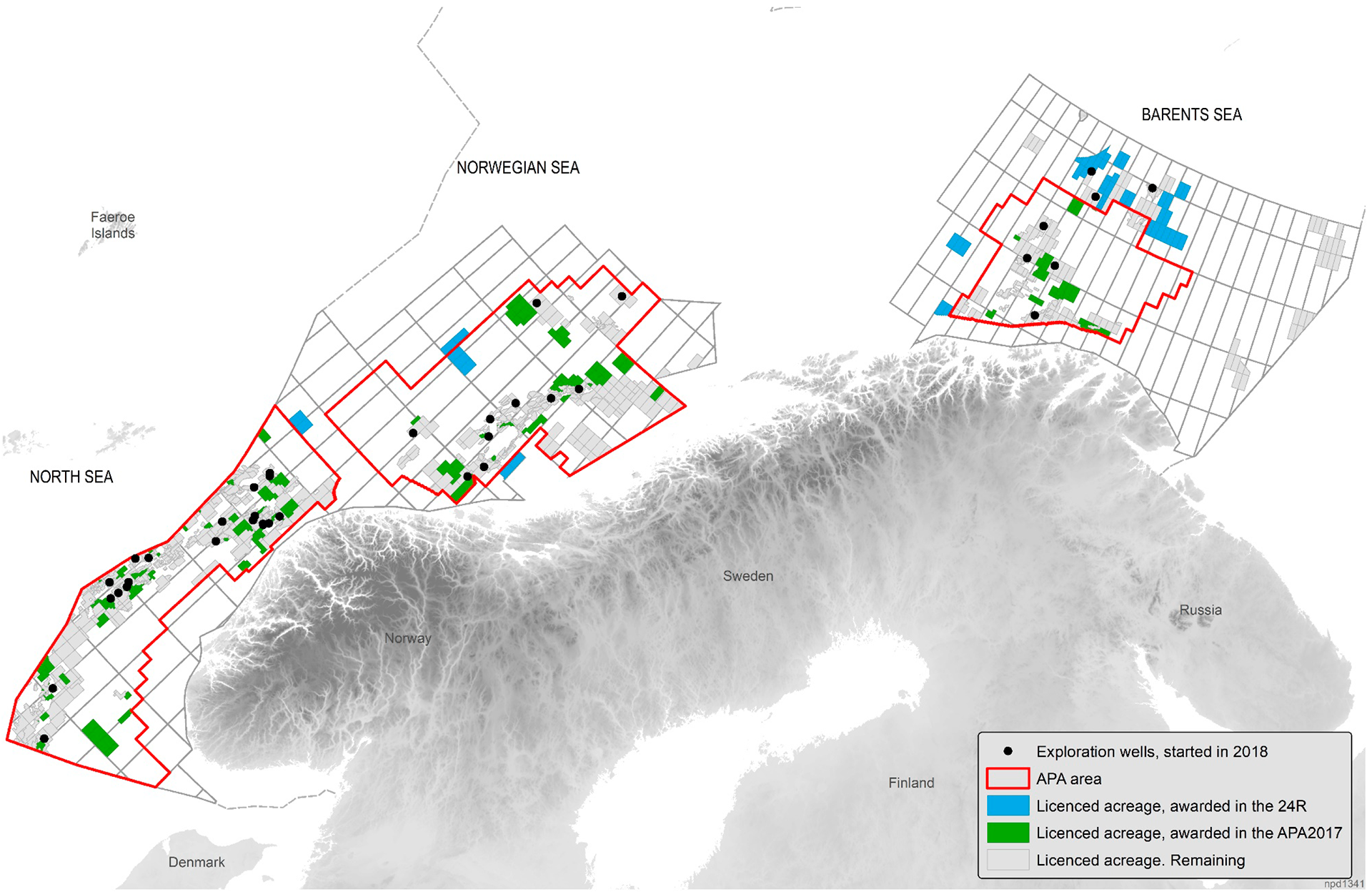 A total of 53 exploration wells were spudded in 2018, an increase of as many as 17 wells from 2017. Based on the companies’ plans so far, this number is expected to remain at the same high level in 2019.

There are several reasons for the increased exploration activity. In recent years, large parts of the Shelf have been covered with new and improved seismic data. This has enabled the industry to define new exploration prospects, and resulted in extensive awards in the licensing rounds. At the same time, reduced cost levels and increasing oil prices have improved exploration profitability. 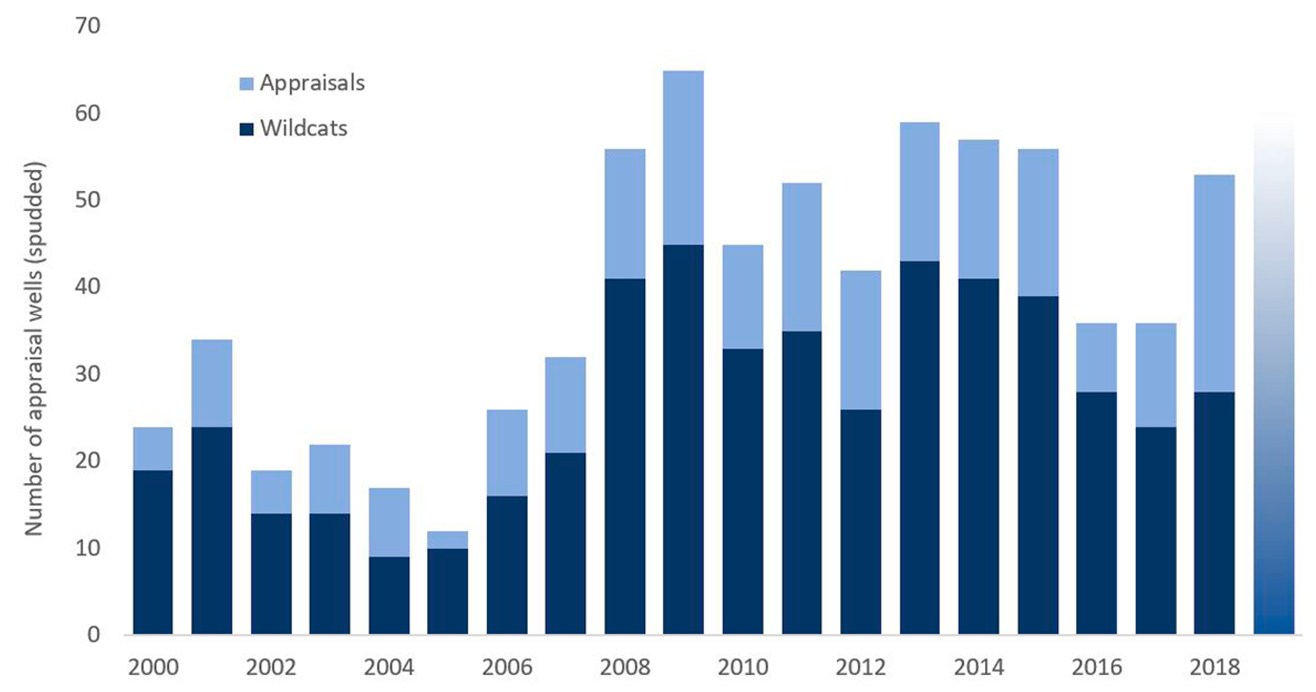 27 wildcat wells were completed in 2018, and these have resulted in 11 discoveries, yielding a discovery rate of 44 per cent3. The discoveries have a preliminary total estimate of 82 million Sm3 recoverable oil equivalents (o.e.). This yields an anticipated resource growth that is higher than each of the three previous years.

Resource growth at this level is not sufficient to maintain production of oil and gas at a high level after 2025. Therefore, it is essential that more profitable resources are proven in the next few years.

3 Two wildcat wells that were not completed («junked») due to technical problems are not included in the discovery rate.

Norway is an important long-term supplier of gas to Europe. Gas can contribute to more sustainable development in three ways: by providing reasonable and stable access to energy, by displacing use of coal and by supporting renewable energy production. Norwegian gas also represents substantial values for the Norwegian society.

Today, Norwegian gas production is at plateau level. As time goes on, declining production from the major fields must be replaced by discoveries that have not yet been made. New capacity is available in Polarled, and capacity will also gradually become available in other parts of the infrastructure. This means that it will be more attractive to explore for gas, and it is important that the industry exploits this opportunity and intensifies its search for gas.

The Norwegian Petroleum Directorate expects that nearly two-thirds of the gas resources that have not yet been discovered are located in the Barents Sea. This underlines the importance of the Barents Sea for long-term gas production. Today’s gas transport capacity from the Barents Sea is limited to the LNG plant at Melkøya which, according to plan, will be fully utilised until the beginning of the 2040 decade. If the companies do not explore for gas, it will also be more difficult to find sufficient resources to justify new gas infrastructure.

4.3 Significant interest in the Norwegian shelf

The authorities facilitate predictable and stable framework conditions, and active award of acreage. The industry exhibits significant interest in the Norwegian Shelf, which is reflected in the number of applications for exploration acreage and awards in the recent licensing rounds. In APA 2017 (Awards in Predefined Areas), which were awarded in early 2018, 75 new production licences were awarded to 34 companies. Of the 75 production licences, 45 are in the North Sea, 22 in the Norwegian Sea and 8 in the Barents Sea.

In June 2018, 12 new production licences with a total of 47 blocks were awarded to 11 companies in the 24th licensing round; 9 blocks in the Norwegian Sea and 38 in the Barents Sea.

While interest has been greatest in the North Sea and the Norwegian Sea, we must look back to 2007 to find greater interest in the Barents Sea in an APA round. 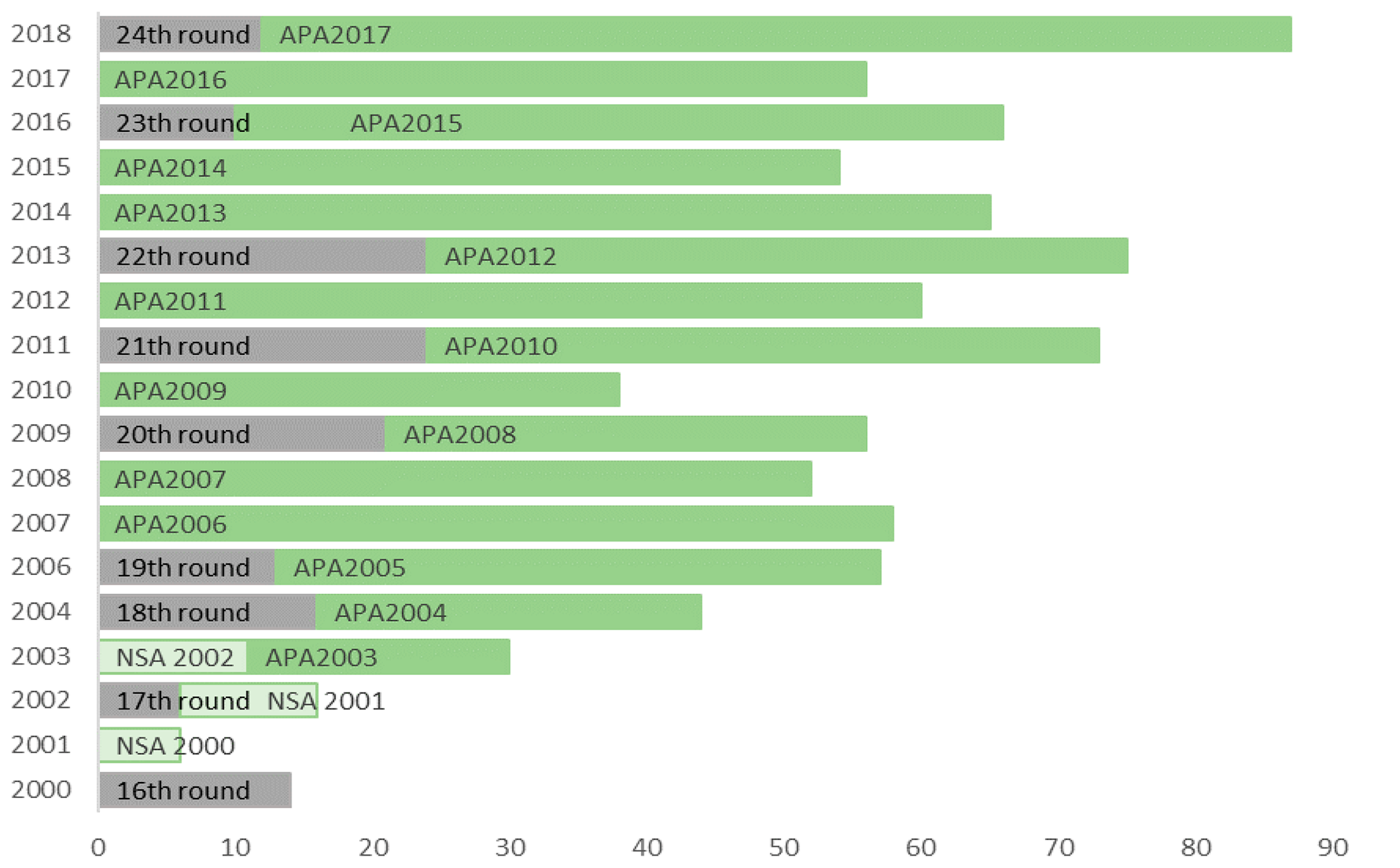 Eleven discoveries were made in 2018. Of these, three are in the Barents Sea, two in the Norwegian Sea and six in the North Sea. 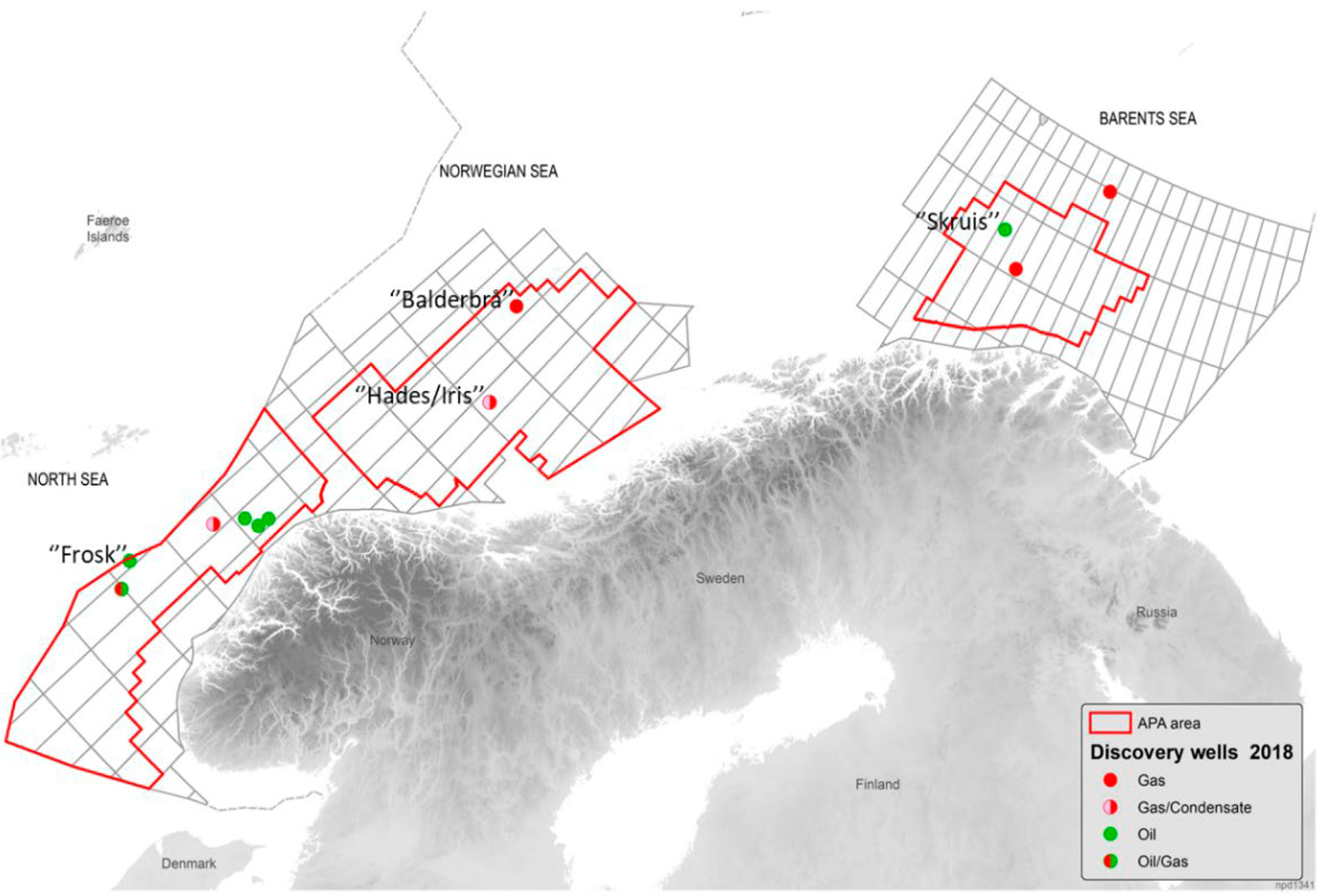 In The North Sea, 30 exploration wells were completed in 2018, 13 of which are wildcat wells. Activity has increased dramatically here compared with 2017.

Six discoveries were made, the largest was Aker BP’s 24/9-12 S (Frosk) oil discovery in injectite sands from the Paleocene Age. This is located close to the Alvheim field, and the licensees are considering tying the field to the infrastructure there. Three oil discoveries were also made in the area north of the Troll field: 35/9-14 (Tethys), 35/12-6 S (Kallåsen) and 35/10-4 A (Gnomoria). The 30/6-30 (Rungne) gas and condensate discovery was proven just north of the Oseberg field, and the 16/1-29 S (Lille Prinsen) oil and gas discovery was proven north of the Ivar Aasen field. There are no clarified development solutions for these discoveries at this time, but they are being considered for development together with other discoveries in the area.

Several appraisal wells were also drilled with positive results. For example, the volume estimate for the 35/12-2 (Grosbeak) gas discovery northeast of the Fram field increased by about 13 million Sm3 recoverable o.e., which is more than a doubling.

In The Norwegian Sea, 13 exploration wells were completed in 2018, considerably more than in the two previous years. Eight of these were wildcat wells, which resulted in two discoveries.

In well 6604/5-1 (Balderbrå), west of Aasta Hansteen, Wintershall proved gas in the Nise formation from the Late Cretaceous Age. The discovery will be evaluated for tie-in to the Aasta Hansteen facility. OMV found gas and condensate in two levels from the Early Cretaceous and Middle Jurassic in well 6506/11-10 (Hades/Iris), near the Morvin field.

The volume potential of the 6608/10-17 S (Cape Vulture) discovery has been clarified by the drilling of appraisal wells 6608/10 S, A and B, and a development is being considered with tie-in to the Norne field.

In The Barents Sea, exploration activity has been lower than in the record year 2017. This is due to factors such as postponement of several of the planned wells in 2018 to 2019. Eight wells were completed compared with 17 in 2017. Six wildcat wells were drilled, which resulted in three discoveries.

North of the 7324/8-1 (Wisting) discovery, Equinor found gas in well 7324/3-1 (Intrepid Eagle) from the Late Triassic Age. This discovery was among the year’s largest on the Shelf. The well also delineated the 7325/1-1 (Atlantis) discovery, with the result that volumes increased somewhat.

An appraisal well, 7220/11-5 S, was drilled on the Alta discovery. The well was drilled horizontally through the reservoir, with the objective of testing the production properties in carbonate rocks. The test production, which lasted two months, revealed promising results. About 0.1 million Sm3 oil was produced. 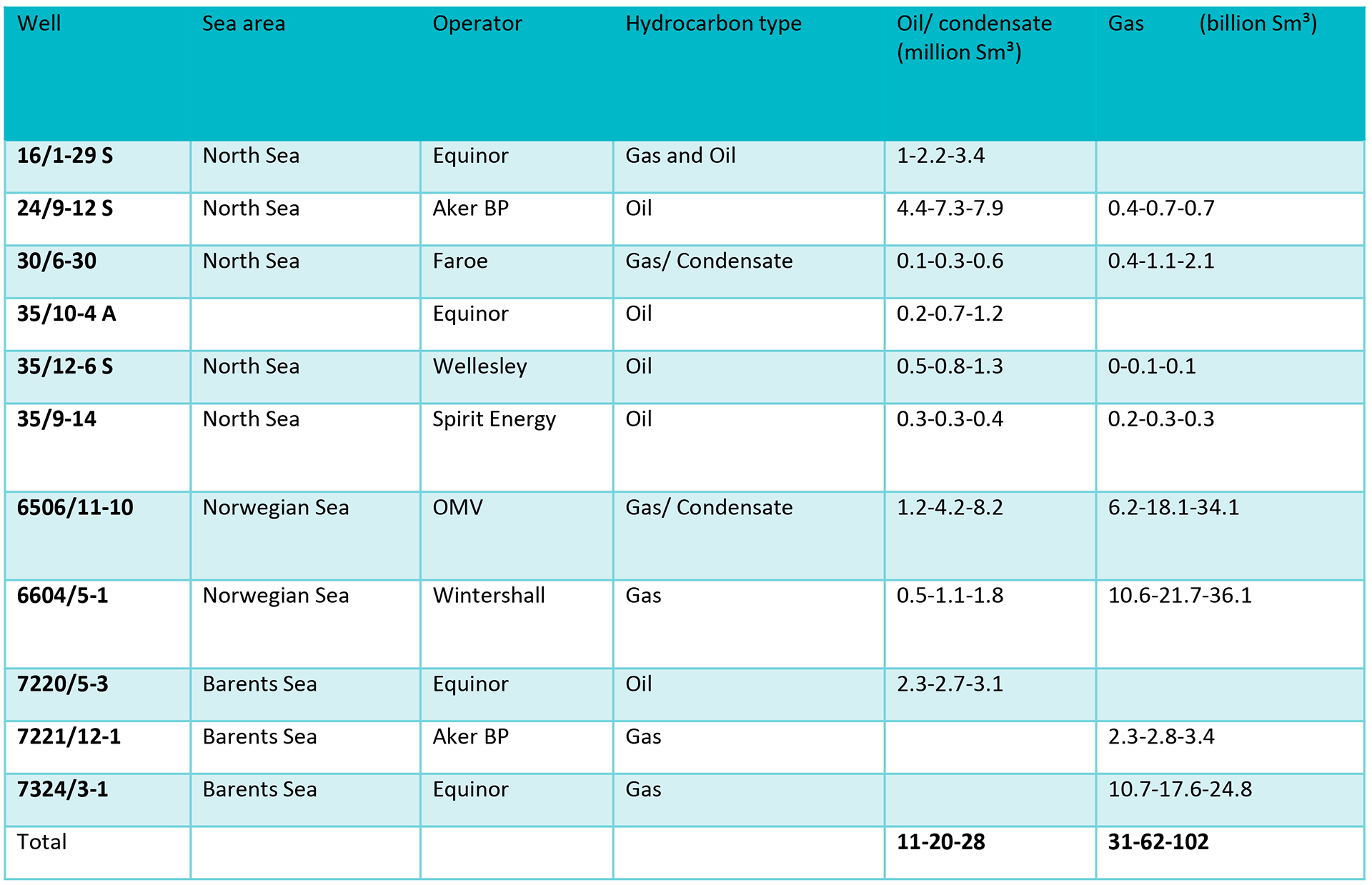 Our resource estimate indicates that nearly two-thirds of the undiscovered resources lie in the Barents Sea. Therefore, this area will be important for maintaining production over the longer term.

The NPD acquired seismic in the Barents Sea in the period from 2012 to 2017. This work will continue in 2019, and the Storting (Norwegian Parliament) has allocated funds for mapping an area in the northeastern part of the Barents Sea, near the Russian border.

After the Ministry of Petroleum and Energy was delegated administrative responsibility for the mineral deposits on the Shelf in 2017, the NPD was assigned the task of mapping the resource opportunities.

Over the course of several research expeditions, the NPD has taken samples of both iron-manganese crusts and massive sulphide deposits. The deposits are found in the deeper parts of the Norwegian Sea and along the Mid-Atlantic Ridge. There may be important industrial metals here, such as copper, zinc, cobalt, nickel, vanadium, wolfram and silver, in water depths between 800 and 3000 metres. These metals play an important role in e.g. electric vehicles, wind turbines and mobile phones.

A four-week expedition was carried out in 2018 on the Mohns Ridge. Several types of geophysical data were collected using an autonomous underwater vehicle (AUV). Sulphide samples were collected with a remotely operated vehicle (ROV). This data will now be interpreted and the mineral samples will be analysed. 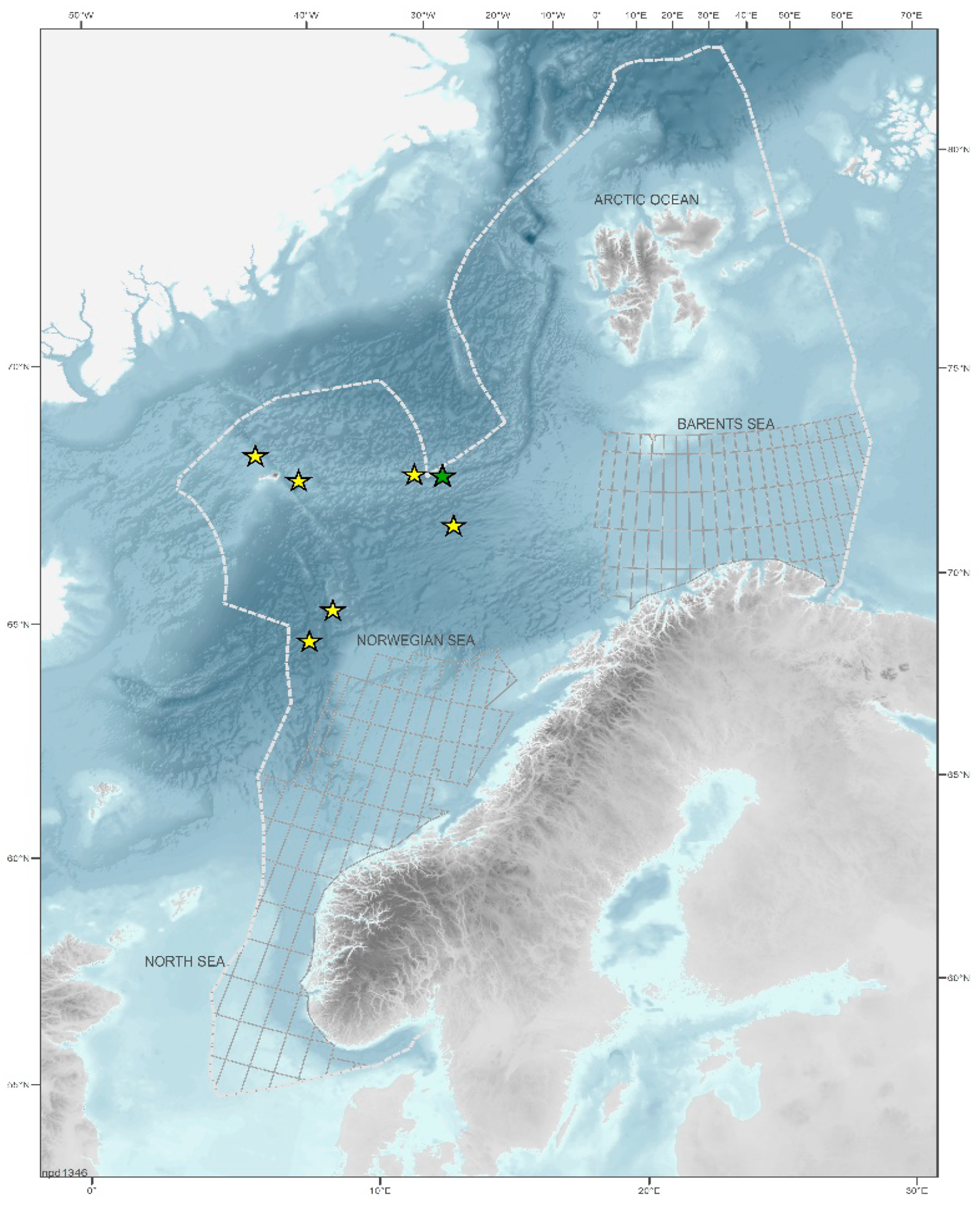 Figure 4-5
Map of the Norwegian Continental Shelf.
Areas where the NPD has collected data and mineral samples are marked with stars.

The NPD plans similar data acquisition activities in the years ahead.

4.7 Storage of CO2 on the Norwegian shelf

In July 2018, for the first time ever, the Ministry of Petroleum and Energy announced a licensing round for injection and storage of CO2 under the seabed. Equinor with its partners Shell and Total in the Northern Lights project, submitted an application for an exploitation permit for a subsea reservoir in September.

The goal is to realise a cost-effective solution for full-scale CO2 capture and storage in Norway, given that this will lead to technology development in an international perspective, cf. Prop. 85 S (2017-2018).

According to plan, the exploitation permit will be awarded in 2019.