Reporting to the revised national budget

Reporting shall be in accordance with the NPD's resource classification 2016.

RC0 includes petroleum quantities that have been produced (sold and delivered).

Petroleum quantities in projects in production should be reported in RC0+1.The term RC0+1 has been established to show the estimated original recoverable quantities from a project based on the current understanding of the size of the quantities not yet produced. Sold and delivered quantities are also included.

RC4, 5, 6 and 7 represent recoverable petroleum quantities in projects where a development decision has not yet been made.

RC8 comprises undiscovered petroleum quantities in mapped prospects. The total risk-weighted recoverable resources in prospects that lie partly or completely within the field's/discovery's licensed area shall be reported

Expected resource class as of 31.12. of the current year shall be used as a basis. If a decision is expected by the end of the current year (31.12.), the project shall be reported in the resource class that results from this decision. An example of this is if a Plan for Development and Operation (PDO) is expected to be submitted to the authorities before the end of the year, the project shall be reported in RC3.

Projects related to pipelines and terminals are classified similar to the classification of recoverable resources, according to decision status (planned, decided, approved).

An overview and the main tables from NPD’s resource classification 2016 are shown below. 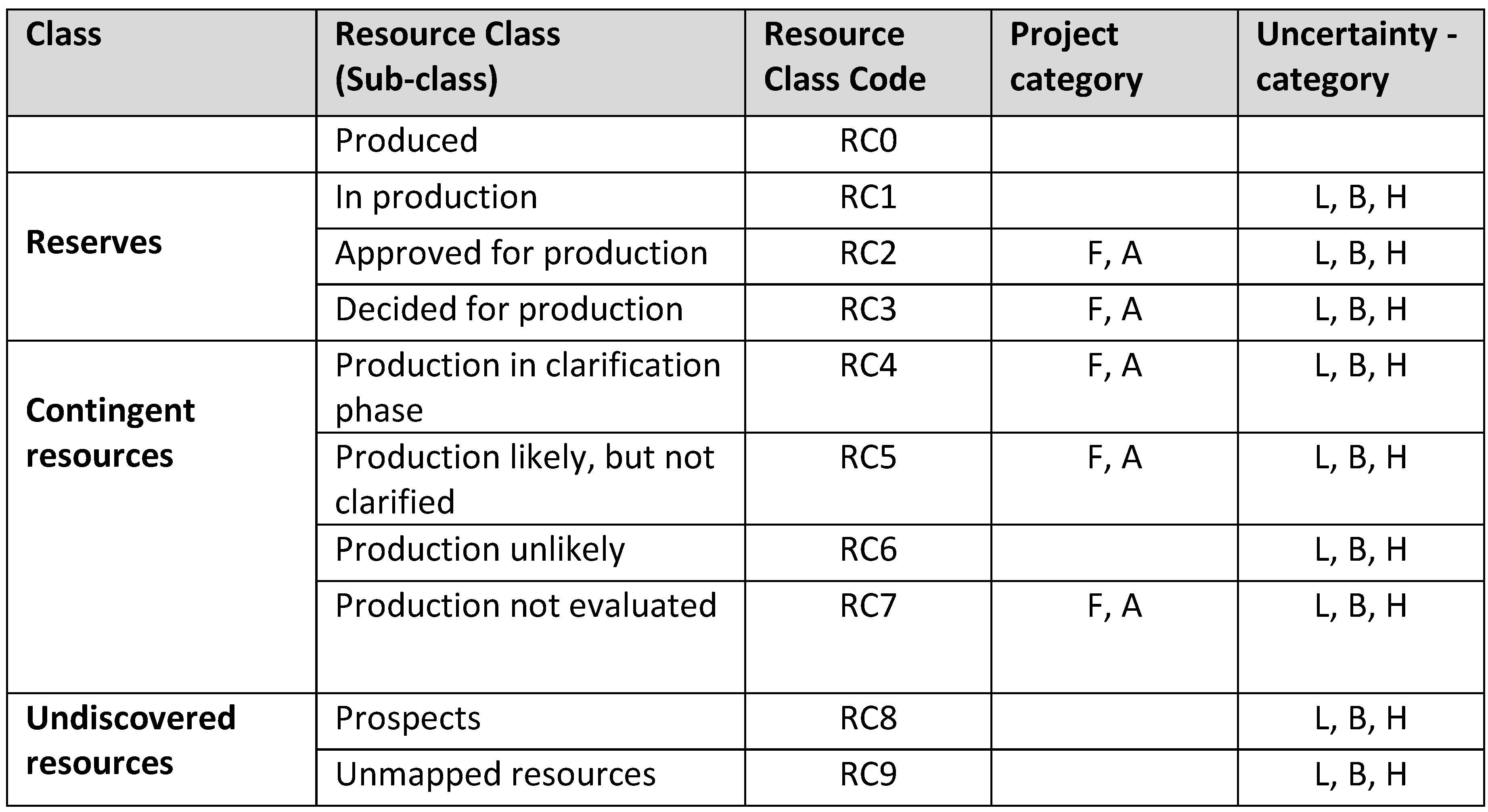 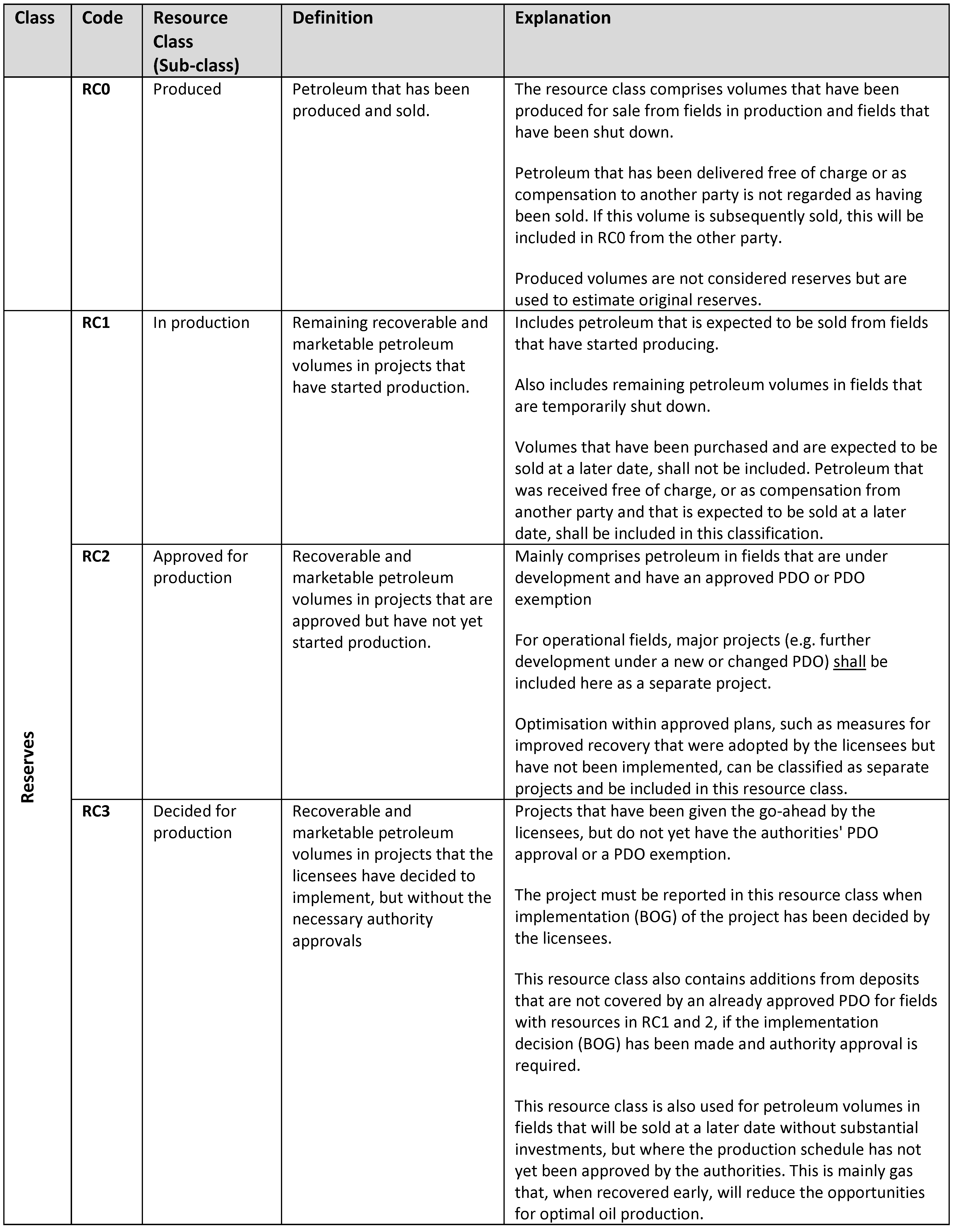 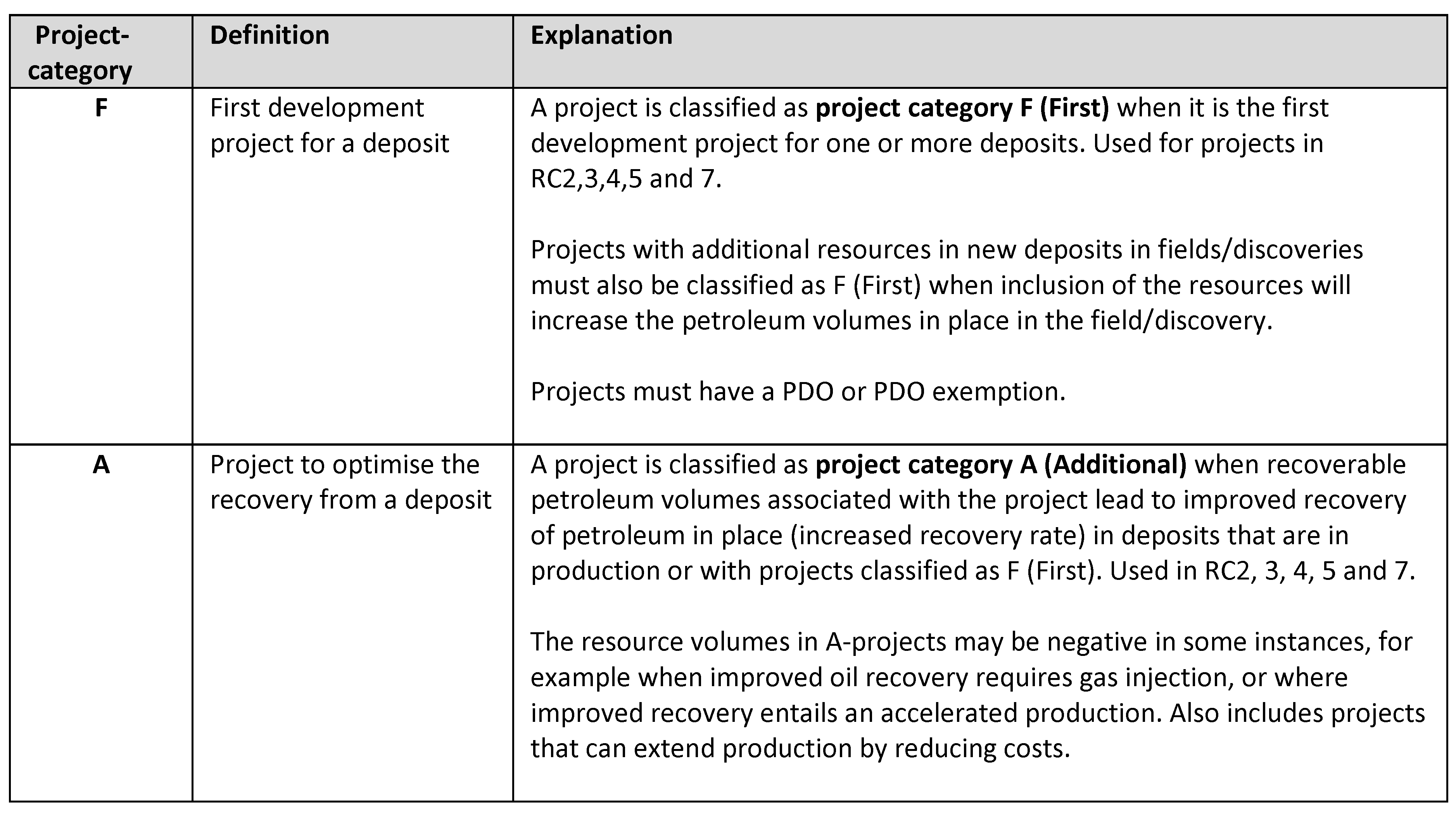 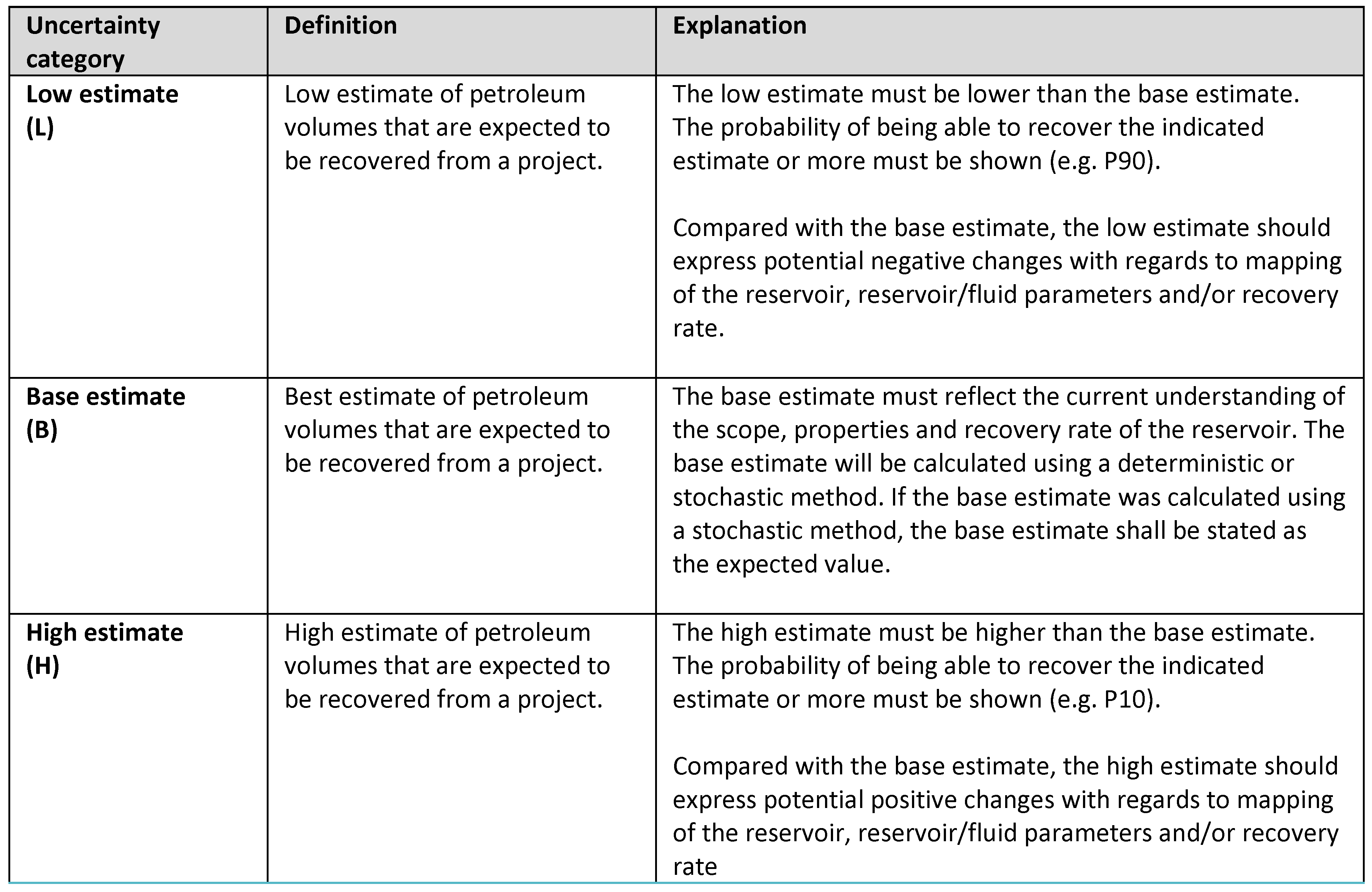 3.3.1 Clarification of the distinction between contingent resources and reserves

Projects with additional volumes in fields must be classified either as reserves or as contingent resources.

The following criteria shall be applied to classify projects as reserves:

1. The project is regarded as normal optimization within approved plans, e.g.:

2. Well projects that have a high probability of implementation, where the following conditions are met:

Wells planned to be drilled but do not meet the criteria above, will be linked to the quantities of petroleum which are classified as contingent resources in resource class 4, 5, 6 or 7.

Examples of other projects with contingent resources on fields are:

In all cases, it is a requirement that the project must undergo a defined decision process with milestones/”decision gates” and costs must be associated to the project.

The reserves reported should be considered profitable, assuming long-term assumptions regarding product prices and operating costs. Projects where most of the investments are sunk costs should be reported as reserves when total cash flow, including contingent resources, are expected to be profitable.

RC6 is used for deposits which, even in the long-term, probably cannot be recovered profitably, and resources in minor, non-tested discoveries where recovery is not very likely. If the deposit is a supplementary resource to a field, it is reported under the field. Stand-alone discoveries are to be reported separately.

Improved recovery measures on fields (project category A) which have been evaluated and found to be unprofitable, shall not be reported in RC6. If resources can be realized with other measures later, they could be included in RC7A.

Undiscovered recoverable resources in or nearby fields and discoveries will either comprise prospects or undrilled segments in the field/discovery, which for different reasons are not defined as a separate prospect.

The main rule is that undiscovered, recoverable risked volumes should be reported in RC8. Risked volumes are calculated by multiplying expected recoverable petroleum quantities, given a discovery, by the probability of making a discovery. The total risked volume that lies completely or partly within own licensed area and can be recovered in connection with the field/discovery, shall be reported. Prospects that extend over the borders of the production licence, or into adjoining production licences, are to be reported as total risked volumes. In some cases where the discovery probability is high, and the volumes are included in the base of a development solution, undiscovered resources may, in agreement with the NPD, be categorised differently.